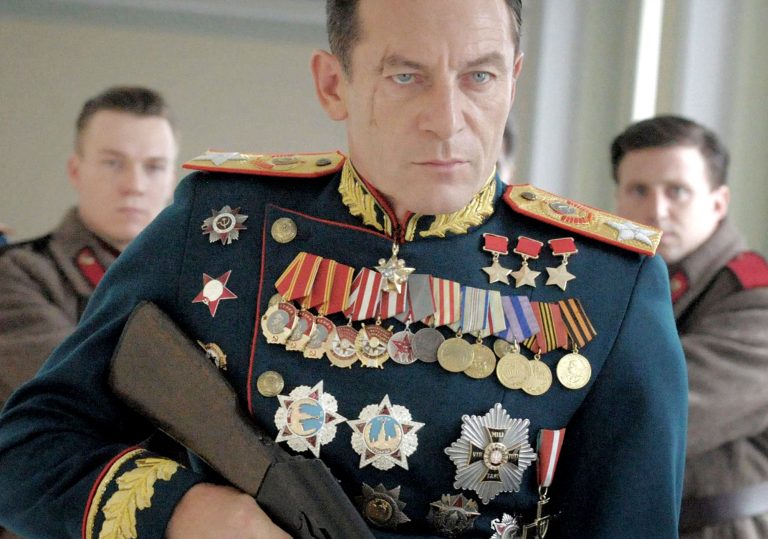 We’re extremely down for Iannucci feature film follow-up to In the Loop.

Maybe doesn’t have the re-watch factor of some of the director’s past work.

Accents are a funny thing, especially in movies. It’s the sign of a good actor if they’re able to sustain an accent and appear as if they’re not thinking about it too hard. As if the accent has become part of the performance. Armando Iannucci plays funny business with accents in his mordantly funny new film The Death of Stalin, as Russian Communist party apparatchiks are exhumed by a slew of British and American character actors who all retain their natural accents.

In a few cases, instead of adding an obligatory Russian lilt (usually used in movies to denote evil), they’ll adopt a completely different accent – Jason Isaacs, as Red Army Chief of Staff Zhukov, rolls into the plot late game sounding like Manc bard John Cooper Clarke en route to a rugby match. While it’s the type of distancing effect which may serve to obscure the film’s highly specific historical context (the beginning of the post-Stalin era in Russia), it also works to emphasise that this is not in any way a historical film, but a barbed political satire that can be transposed to any place and any time.

It appears that Iannucci has posed the question: what would be the natural next step from the Whitehall backbiting of In the Loop? His answer is taking that well-oiled and wordy template – plus the liberal use of colourful invective – and transpose it to the world of a monstrous European dictator. A vast ensemble orbits around the dead-eyed scheming of Simon Russell Beale’s Lavrentiy Beria, who aims to be the last man standing after the sudden death of (cockney) Comrade Stalin (Adrian McLoughlin). The boozy toadying is now no more as a race for survival is on. But it’s far, far more complicated than a simple competition of personalities, as legacies need to be formulated, information manipulated, wrongs righted and memories of the old regime buried and burned, placed our of sight and out of mind forever.

There is a period while watching The Death of Stalin where you have to adjust yourself to its near-the-knuckle provocations. How can a movie present some of history’s greatest monsters – men whose hands are positively soaked in blood – as buffoonish oafs who treat the populous with bald contempt? It is adapted from a graphic novel by Fabien Nury and Thierry Robin, and it actually comes across as a pop extrapolation of real life atrocities. But in the end, its sensitivities remain in tact, because it still captures the self-serving awfulness of these conniving dolts. It never attempts to empathise with who these people really were, or at least only tries to humanise them to a limited level of acceptability.

Where Beria always retains a sense of political reality, his key rival Nikita Khrushchev (Steve Buscemi) is the only other savvy operator of a bunch which includes Jeffrey Tambor, hilarious as the effete Malenkov, Michael Palin as cheery sycophant Molotov and Paul Whitehouse as tough-talking Mikoyan. Though it’s hard to think how the plotline could be more complex, with characters manoeuvring at least ten steps ahead of their adversaries, the machinations remain entirely abstract, as if Russia were a giant chess board whose formation is altered at the will of a few irascible men.

The film is funny, nasty and relentless, but sadly not as funny, nasty and relentless as some of Iannucci’s past work. While the script is a thing of convoluted beauty, it never really feels like a piece of cinema, more a grandly mounted TV special or, occasionally, a big budget stage farce which is being broadcast live. It’s a lot of people talking in rooms, and for all the intrigue, in the end, there’s very little actual drama. Yet, this also might be Iannucci’s most complete film, a work that dispenses with quotable quips and “classic” scenes in order to built hearty, self-lacerating laughs while staring deep into an abyss of abject horror.

We’re extremely down for Iannucci feature film follow-up to In the Loop.

Maybe doesn’t have the re-watch factor of some of the director’s past work.