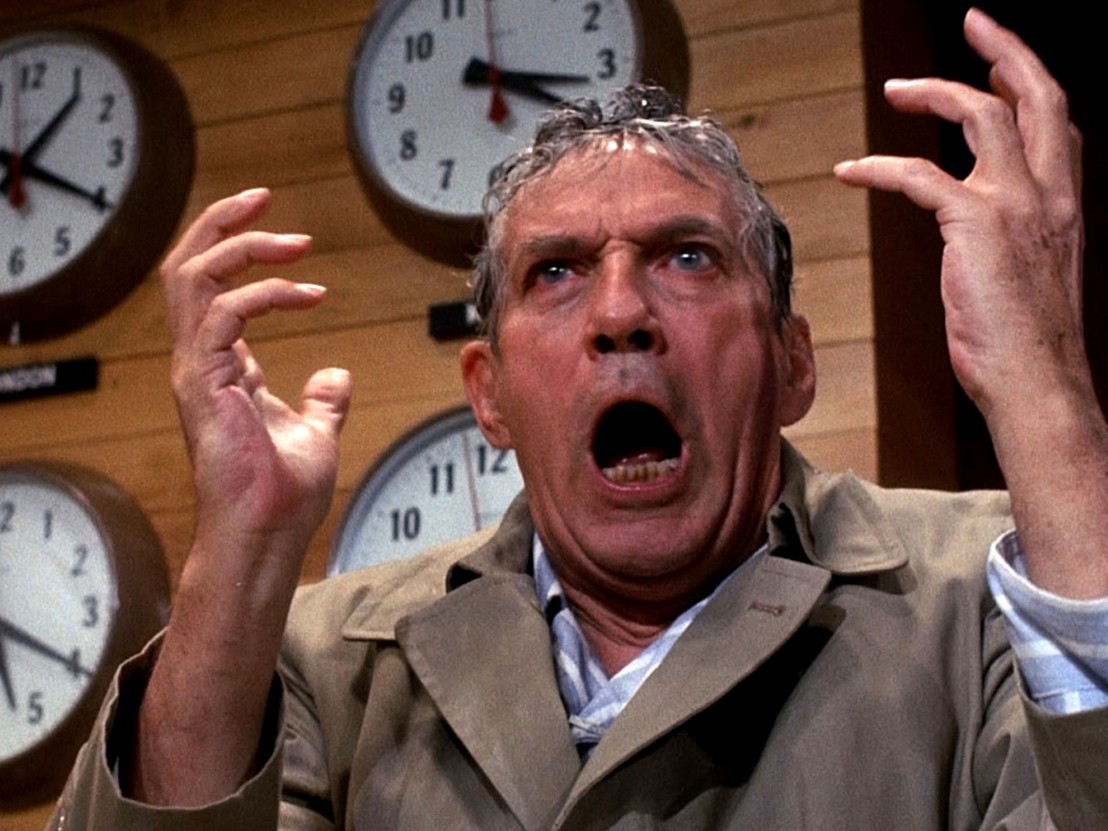 There’s a general misconception that satire exists as a subdivision of comedy. It’s true that the two often go hand-in-hand, yet satire is also a genre in and of itself. Spike Lee’s own under-appreciated satire, Bamboozled, opens with a handy definition: “A literary work in which human vice or folly is ridiculed or attacked scornfully… Irony, derision or caustic wit used to attack or expose folly, vice or stupidity.”

We see satire as holding a distorting mirror up to reality; the reflection is somewhat exaggerated, and not necessarily comical, but always has some basis in truth. Here are six Hollywood films that were produced with the intention of ridiculing, attacking or exposing the workings of the media – all of which proved spookily accurate in their visions of a future society.

Donald Trump’s presidential campaign is currently taking America by storm, but one film predicted the rise of celebrity politics as early as 1957. A Face in the Crowd follows a philanderer, drunkard and deeply troubling individual named Larry “Lonesome” Rhodes, who seduces radio audiences with his extroverted personality and homespun charm. Corrupted by household fame, he fosters political ambitions and abandons his progressive beliefs for a grab at power.

Rhodes’ comeuppance arrives at the peak of his own delusion, when his increasingly deranged ramblings are unwittingly broadcast. The film flopped commercially, while Andy Griffiths, in spite of his monstrous portrayal of Rhodes, went on to have a successful career in television. Nonetheless, it stands as a prescient exposé of mass media as a tool of manipulation and a terrifying warning against the cult of personality.

The Truman Show satirises the voyeurism, paranoia and artificiality of television, and is commonly credited with foreshadowing the rise of reality TV. But it also inadvertently presages social media. Jim Carey’s everyman, Truman Burbank, who discovers that his life in suburban paradise is being beamed into homes across America, can be considered a precursor to everything from hidden camera pranks to performers in “structured reality” formats – replete with elaborate storylines, product placement and controlled environments.

The notion that every milestone in Truman’s life has become a cultural event also forecasts the social feeds through which we are able to share personal information with millions of strangers. There’s one key difference though: Truman isn’t seeking fame. In an age where private lives are routinely played out in the public arena, there’s plenty to learn from his humility.

Billy Wilder is alleged to have declared: “If you’re trying to tell the truth to the audience, you’d better be funny or they’ll kill you.” Alas, few films of Wilder’s were so barbed as Ace in the Hole, and few performed quite as poorly. Kirk Douglas stars as a cynical journalist who discovers a man trapped in a cave and milks the situation for all the headlines he can generate, blurring the problematic line between reporting news and creating it.

The film, distributed in some territories as The Big Carnival, coined the now clichéd notion of a “media circus” in staggering shots of tourists flocking to see the location of the cave-in, which has transformed into a bawdy fairground that boosts the local economy but does little to help the trapped man, or comfort his family. Former newspaper reporter Wilder skewers our vapid obsession with human interest stories – a timeless theme that pervades all press sensationalism, from tabloid hacking to clickbait.

After threatening to kill himself live on air, newsreader Howard Beale attracts unprecedented publicity, inspiring avaricious network bosses to introduce editorial comment to newscasts, following the logic that opinions garner higher ratings than facts. Network is chock-full of monologues and Beale, the self-described “angry prophet, denouncing the hypocrisies of our time,” is the main perpetrator. His rants remain as revelatory now as in 1976.

The film’s depiction of news being subsumed by performance seems especially prescient today, not just in relation to big personality news anchors but also to digital media, where information is buried under commentary, interactivity and theatre. Take the iconic scene where Beale urges viewers to shout from their windows that they are “mad as hell, and not gonna take it any more.” A fitting analogy for the echo chamber of Twitter if ever there was one.

Barry Levinson’s film introduced political spin to audiences who were relatively naïve to the extent of collusion between politicians and the media. Robert De Niro plays a media guru who attempts to deflect attention from a Presidential sex scandal, even employing a movie producer (Dustin Hoffman) to construct a phoney war, with press concoctions including a photogenic young girl (Kirsten Dunst) and a forgotten soldier (Woody Harrelson) serving to stoke mass outrage. This exaggerated situation shows spin doctors going to remarkable lengths not merely to cover up an incident, but to distract the public with another one. In reality this is common practise, from burying bad news to cherry-picking positive statistics. Yet the film exaggerates these practises in order to show the extreme potential for press compliance with official government policy.

Repeated reference is made to the first Gulf War, with salient points that almost prefigure the role of media coverage during the 2003 invasion of Iraq, while dialogue noting the lack of photographs from conflict zones – and the ease with which they might be faked – seems to encapsulate the online conspiracy theory in embryonic form. Given that Wag the Dog was distributed before the Monica Lewinsky scandal broke, it’s hard not to view this particular prophesy as self-fulfilling, as if Bill Clinton saw the film and dared to dream.

Spike Lee has previously professed admiration for Ace in the Hole and Network. Both are clear influences on Bamboozled, in which Damon Wayans’ frustrated TV writer pitches a show intending to satirise racial stereotypes but ends up perpetuating them. The film includes a protracted montage sequence of grainy footage that forces the viewer to consider evidence of institutional racism in the entertainment industry. Evidently Lee’s position has not changed, judging by his decision to boycott this year’s Academy Awards, along with Bamboozled star Jada Pinkett Smith.

On scene, in which police open fire on a group of black militants – hitting all but the one white member – remains a shrewd comment on contemporary race relations in the US. Among the film’s most startling prognostications, though, is its depiction of terrorists broadcasting executions on the internet, dubbed unrealistic by critics at the time.