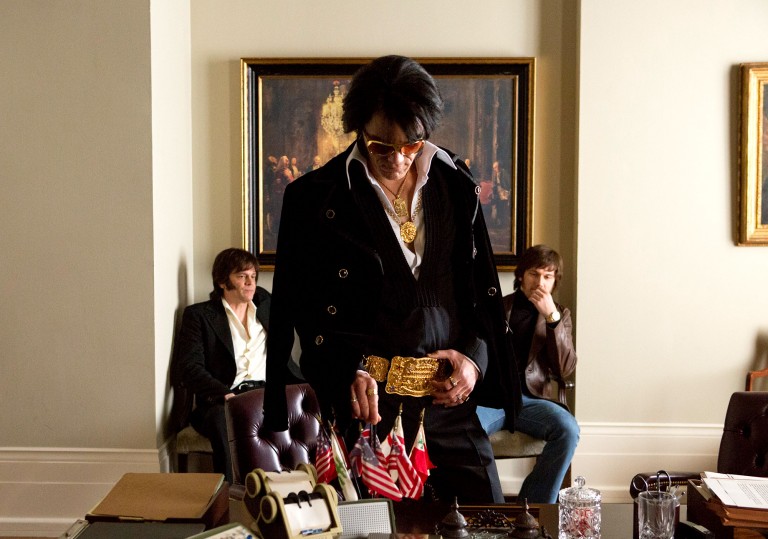 As reactionary politics and rhetoric are becoming increasingly popular in the US and the UK, it might not be the healthiest climate in which to release a wacky comedy about one of America’s most harmful right wing politicians. Yet one might have hoped that Elvis & Nixon – inspired by the meeting of the King with POTUS in 1970 – would embrace the edginess of its material and grapple with the moral ambiguities of this surreal event, one which occurred in the middle of a period of incredible unrest in the US.

As it is, the film strangely ignores Nixon’s history throughout, even in an on-screen ‘where-are-they-now’ text closing the film which bizarrely focuses on the sentences doled out to the President’s assistants. Elvis meanwhile, a figure of immense influence on the emergence of the counterculture (albeit reluctantly), is here to be enjoyed as so much comic scenery, a riff on an iconography no deeper really than that presented in Jack White’s Walk Hard cameo.

In this oddly dated, politically neutral film, Kevin Spacey delivers a fittingly unimaginative but nonetheless efficient performance, presenting his Nixon as an endearingly angry, old-fashioned and patriotic family man. Spacey plays his scenes as classic Hollywood farce. However, the film itself oscillates indecisively between a comedy of total absurdity in the vein of the Coens (think Burn After Reading) and something far more muted and sombre, offering only polite giggles.

The first half hour for instance sees at least a dozen characters exclaim “Elvis Presley!” on seeing the King, a scenario which is presented as innately hilarious on each occasion. This becomes quickly repetitive and dull, reaching the point of active irritation around the fourth time a beautiful woman goes into fangirl mode for the King. But more insidious than the apolitical caper vibe is the film’s vague embrace of a kind of depressing nostalgia. We are presented with a time that seems ‘simpler’, where neither Vietnam nor the sexual revolution of the 1960s seem to have occurred in any tangible way. The closest we come to an acknowledgement of the sexual revolution is in Elvis’ bewildered, strung out complaints about drug culture, and even this is not queried, but rather played for laughs being merely a facet of latter day Elvis’ cute zaniness.

After a string of incredible stand out performances in American indies and mainstream movies alike, it comes as something of a surprise that one of the biggest disappointments here is Michael Shannon. The actor of course bears no resemblance to the singer whatsoever, being too tall, too skinny and his face exhibiting a kind of roughness that sits in total contrast to the pop star’s baby face. Shannon does not attempt to ape Elvis mannerisms in particular, something which sits in uncomfortable contrast to Spacey’s straightforward attempt at impersonation. Instead, the actor seems bored and barely present, mumbling through a performance even he does not seem to be particularly convinced by.

Such a contrast of acting modes, along with a rather bland and timid filmmaking style and an excessive prolonging of the film’s big moment – the meeting – makes for a cringeworthy and quite underwhelming climactic encounter between the two ‘recording artists’, as the excellent tagline goes, hinting at Watergate with a sly wit that is entirely absent from the actual movie. To the film’s credit, the meeting scene is indeed its highest point, even if it presents itself as slightly predictable and not as ludicrous as it could – or should – have been. A moment when Elvis performs a karate move for a baffled Nixon sounds funnier than it is on screen, for instance.

However, any momentum the film gains in its last act is repeatedly undermined by an uncomfortable, extended joke about Elvis wanting to enter the White House with a cool gun for the president, and by a redundant subplot about The King’s friend Jerry (Alex Pettyfer, actually asleep) who wants to go back home to his girlfriend (Sky Ferreira, ditto) in time to meet her parents and propose. We don’t need this attempt at an emotional core, neither do we need it to downplay the nuttiness of the main event. Indeed, a bolder film might have played up the absurdity and surrealism of the situation or given some gripping historical context for all this. As it is, there isn’t much to get all shook up about. 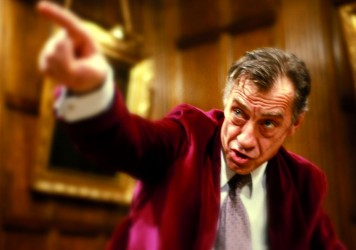 In praise of Philip Baker Hall’s performance as Richard Nixon