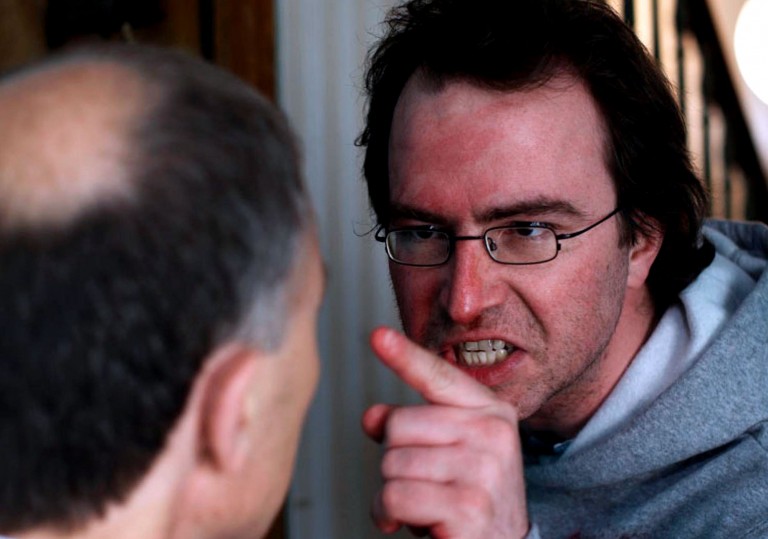 Evil has rarely been so hilariously/horribly banal.

MONDAY. TUESDAY. The events of Down Terrace are regularly punctuated by intertitles stating in bold capitals which day of the week it is. These fit in perfectly with the film’s quotidian concerns, as a family’s kitchen sink dramas are played out in a Brighton terrace house measured in cups of tea, talk of DIY repairs, and occasional visits from friends and associates.

Anyone who has seen The Shining knows that such titular time-markers can also serve as a signifier of approaching (and underlying) horrors – and so it is that this sit-com set-up will soon be accommodating violence, betrayal and cold-blooded murder.

Bill (Robert Hill), Maggie (Julia Deakin) and their 34-year-old son Karl (Robert’s real son Robin Hill, who also co-wrote and edited) may seem like an ordinary family, but that is only because, as Bill puts it, they ‘can’t be too conspicuous.’ Bill, you see, heads the local chapter of a crime syndicate. But someone’s been talking to the police, so Bill, with his wife as chief advisor and occasional enforcer, sets about identifying and eliminating the informant in their ranks.

Meanwhile, Karl – engaged to Valda (Kerry Peacock) and soon to be a father himself – wants out, but the blood in this family runs very thick, and as Karl unearths some well-hidden home truths, he looks set to continue the very legacy that he longs to sever.

From The Godfather to The Sopranos, crime and family have long made compelling bedfellows, but in his low-budget feature debut, Ben Wheatley brings a very English working-class brand of domestic banality to his evil, doing for the gangster flick what Steven Sheil’s Mum & Dad did for survival horror. It is a tragedy, but also very funny, shocking and also utterly mundane –though the seething tensions are always palpable even if the violence is largely kept out of the frame. Isn’t that how it is with most close-knit clans?

A British crime film that is refreshingly free not just of cliché but (broadly) of action itself, Down Terrace offers an ensemble of believably contradictory characters divided between their commitments to work and family, and then observes from its darkly comic distance as they all try to kill one another – in the family way.

Evil has rarely been so hilariously/horribly banal.