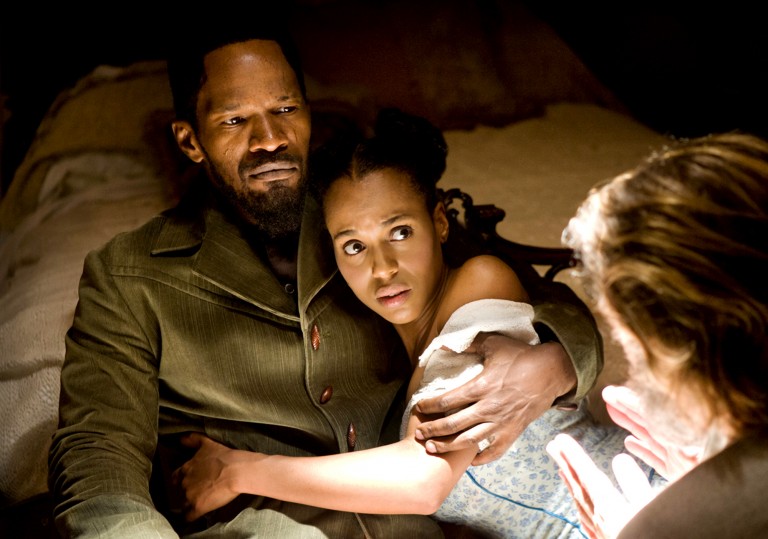 Django all the way! Then again, it’s nearly three hours...

War of the words. Waltz, DiCaprio and Jackson are indeed off the chain.

Not a masterpiece, but a funny, violent, very entertaining crowdpleaser.

Laying down his vengeance trilogy after killing Bill and Hitler, Quentin Tarantino’s new/old story of ‘hate, murder and revenge’ takes the title tune from Sergio Corbucci’s 1966 pulp-Western about a gunslinger who drags a coffin behind him, but leaves Django’s famous gatling gun under the lid. QT’s movie shoots from the lip.

Rewinding to the Deep South of the 1850s means that, for the first time since his colour-coded debut Reservoir Dogs, this is a Tarantino film set in a man’s world. Instead of foot fetishism and avenging angels, we have Jamie Foxx’s scarred slave being freed by a German dentist-turned-bounty-hunter called Dr King Schultz (Christoph Waltz).

So magnificent was Waltz in Inglourious Basterds that the film faded every time he stepped off-screen. It’s a no-brainer move, then, that sees Tarantino push the Austrian actor front-and-centre into a hero role here and, sure enough, Waltz’s Schultz is another terrific creation: funny, debonair, lethal and three moves ahead of everyone else.

Under the pretence of buying one of Candie’s ‘Mandingos’ – slaves who compete in UFC-style death matches on his billiard room floor – Waltz engages DiCaprio in a hugely entertaining battle of wits and words in an elaborate con to save the German-speaking Mrs D. In any language – and he shows off three of them – you could watch Waltz read the phone book and still be captivated. But while no one could touch him in Inglourious Basterds, here Waltz has not one but two equally sharp foils.

Oscillating between articulate flamboyance and wealthy rage as the phrenology-obsessed villain, DiCaprio has surely just installed himself as Tarantino’s newest regular. But it’s one of the director’s old favourites who practically steals it from Waltz. On fire behind a facial prosthetic and an elderly stoop, Samuel L Jackson delivers one of the most memorable performances of his career – trembling, permanently dismayed, immensely funny and dangerously savvy. Putting the vile into servile, he’s an unusually rich and complicated character. Whatever Tarantino gave him on the page, Jackson has run away with it.

Luxuriously stretched and relished by the cast, a centrepiece dinnertable sequence sees all three actors making every word of Tarantino’s lengthy dialogue sing like a sharpened Bowie knife. Wonderfully, Tarantino writes his gentleman killers Schultz and Candie as sticklers for good etiquette: purchases must have a receipt, hats must not be placed on the table and courteousness is vital at all times.

Even after freeing Django with deadly force, Schultz insists on paying for him fair and square. On discovering there’s been a ruse, Candie’s anger volcanoes not because he’s been deceived, but because his two guests have been wasting his time. Sure enough, the film’s most catastrophic shootout is triggered by one character’s insistence on a handshake after business has been concluded.

This being a Spaghetti dish, QT certainly doesn’t forget the red sauce. Blood sprays the walls, bullets splat into heads, knees and nether regions, although cartoon kill-shots are paired with a straight-faced brutality that his camera sometimes turns away from. Just as he did with Basterds, Tarantino has rewritten history to put right what once went wrong, but while machinegunning Hitler in a movie theatre was a blast, there’s something about Django’s violent catharsis that seems surprisingly genuine.

Still, the story loses a lot when it loses DiCaprio and Waltz, leaving Foxx to dish out the film’s final payback in methodical fashion. Next to his expertly loquacious pardner, the D is comparatively silent, although Foxx smoulders effectively with anguish and rage. And for all it’s spectacular talk, Django Unchained doesn’t have anything big to say about slavery (bad) or revenge (good) or anything else really.

You can’t shake the feeling that Tarantino writes great scenes not great movies, but the sheer charisma of his cast seals over the lack of sinewy connective tissue in the script. Cantering out over nearly three hours, this is another pulp novella extended to mock-epic length and it’s to QT’s credit – alongside Waltz, DiCaprio and Jackson – that Django Unchained supports its giant running time far more robustly than Inglourious Basterds did.

It’s a film studded with witty touches, from Schultz politely introducing his horses, Fritz and Tony, to the wibblywobbly tooth that’s spring-mounted on the top of his wagon. N-bombs easily outgun F-bombs as Deep South race relations are mined for Blazing Saddles humour (“It’s a nigga on a horse,” gawps one smalltown local), along with QT’s twists on genre touchstones (Sergio Leone crash-zooms, Broomhilda’s yellow dress, Waltz and Foxx riding through the snow like John Ford’s searchers), his anachronised musical cues (Morricone to hip-hop), his fanboy cameos (a nice one for Franco Nero; a nutty one for himself ) and Robert Richardson’s bold, beautiful cinematography.

Then the gunsmoke clears, the villains lie in bloody bits and Django’s song sends our hero off into sunset. He and Broomhilda, claims Tarantino in a typically irrelevant/irresistible intertextual flourish, are actually the great, great, great grandparents of blaxploitation icon John Shaft. For certain, the story of a slave who became a bounty hunter is all just a little bit of history repeating.

Django all the way! Then again, it’s nearly three hours...

War of the words. Waltz, DiCaprio and Jackson are indeed off the chain.

Not a masterpiece, but a funny, violent, very entertaining crowdpleaser.