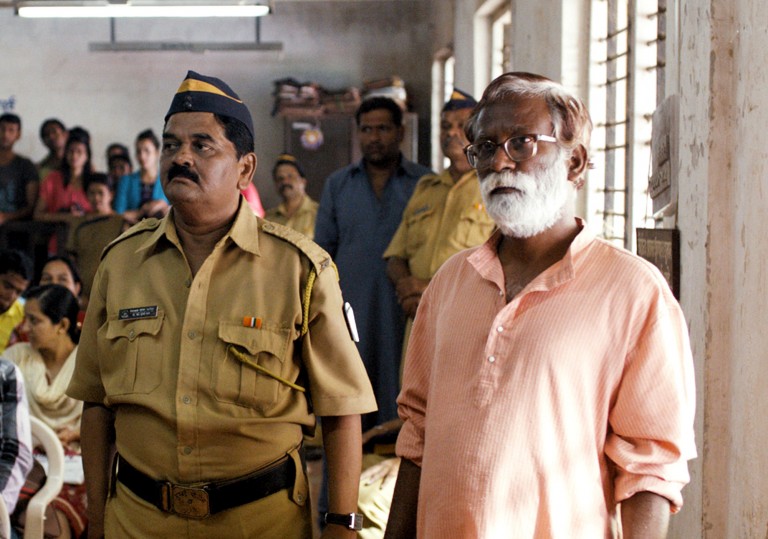 A methodical exposé of unfairness within the Indian judicial system.

This detailed and fascinating insight into India’s justice system throws up plenty of surprises.

Chaitanya Tamhane’s camera watches from a distance. His static wide shots capture the dramas of intersecting lives in Mumbai, letting meaning gradually reveal itself. Evidence accumulates until there is a vivid picture.

The trial of a provocative singer named Narayan (Vira Sathidar) provides the story arc, but this is not a generic legal procedural. Tamhane plots his scenes to play out at a naturalistic pace, camouflaging social details within banal situations in the vein of the late, great Chantal Akerman. His depiction of the Indian judicial system is coruscating, but this is not immediately clear from the film’s gentle tone.

Before Narayan is arrested he is shown teaching a group of small children. He chants three sets of questions and receives three sets of answers before the police come to escort him away. There are no hysterics or speeches, just one event interrupting another. He is up on the charge of inciting a sewerage worker to commit suicide through one of his songs. Vinay (Vivek Gomber) defends him in court. Nutan (Geetanjali Kulkarni) is the public prosecutor. Later we see both lawyers’ home lives. The questing, progressive male will act like a sulky child to his parents. The female lawyer will pass a bus journey exchanging domestic tips with a friend. Their jobs are just a part of their day.

It is marvellous that Tamhane doesn’t weight any of his scenes more heavily than others, especially when the content ranges from lightly humourous to totally infuriating. Narayan is a harmless if defiant old man of failing health. It is an insult against reason that he is being tried for causing suicide by song. Institutional corruption and outdated laws mingle together making it impossible to fully understand which is the key influence over individual authority figures.

By showing his characters from an inscrutable distance, letting us appreciate their foibles without understanding them inside-out, Tamhane indicts the legal system itself, rather than characters within it coasting on the waves of their lives.

A methodical exposé of unfairness within the Indian judicial system.