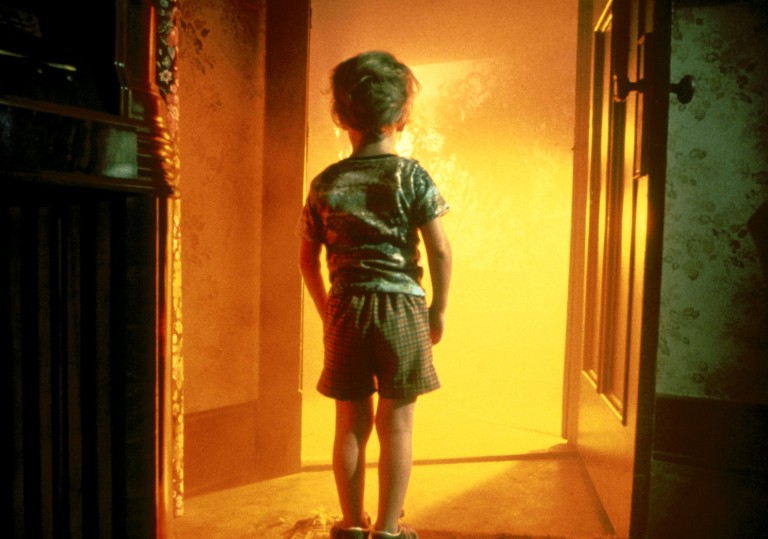 One of The Beard’s early blockbuster behemoths returns.

It’s a big ol’ mess of a movie, but an extremely lovable one.

Watch out for Truffaut’s smile.

The greatest shot in Steven Spielberg’s Close Encounters of the Third Kind isn’t the big ol’ glitterball mothership finally parking up on Earth to perform its dazzling prog rock light show. It’s not loonbag Richard Dreyfus building a giant termite mound in his living room (couldn’t he have done that outside?), the result of an image planted into his subconscious that consumes his waking hours.

The shot can be found early on in the film, during a sequence in which a group of what appear to be paranormal scientists are trying to explain away a miracle – a fleet of World War Two fighter planes that, for decades, were considered missing, have re-appeared in the Sonoran Desert. Upholding the standards of their trade they search for any possible answer, but remain fully aware of the exciting intergalactic ramifications if they don’t happen to find one.

The lead scientist, Claude Lacombe, is played by none-other than French new wave director, François Truffaut – a rare but valuable late career run-out as an actor. His character is not entirely dissimilar to the one he plays in his own Day for Night from 1973, a harried movie director attempting to corral people towards the collective goal of creating art.

There is a lone witness to this “event”, an elderly hispanic gentleman who has a real bad case of sunburn. Lacombe is introduced to this man who is sat on a bench. He looks confused, not realising what has happened or what he has seen. Lacombe kneels down to the level of the witness so he can look him in the eye. His first gesture isn’t a scowl or an angry bark – the cinematic cliches of modern interrogation. He offers a soft smile and quickly wins the affections of this confused gentleman.

This isn’t a big, beaming, sentimental smile, the kind which would suggest that Lacombe is pitying the man, or worse, profiling him, dismissing him as a mad old fool. It’s a small, gentle half-smile, the type which betrays honesty and earns instant empathy. The man knows it’s okay to talk, to reveal exactly what it is he saw. But maybe the smile is something else? Is it Lacombe realising that this is it, the moment where his life’s work suddenly meets with some kind of closure, or at least passes on to an unexpected new phase. It’s a smile of accord, but also of barely-concealed enthusiasm.

This may seem like an trivial gesture, but it it fact tees up much of what the film ends up being about. Lacombe communicates through a translator (played by Bob Balaban) and Close Encounters is a work which asks if we can connect with other people – other beings – in a way which transcends language. Unlike so many other movies about alien visitation, this is a rare example of one which espouses friendliness over aggression. Its simple message is that it is always better to begin a conversation with a smile.

One of The Beard’s early blockbuster behemoths returns.

It’s a big ol’ mess of a movie, but an extremely lovable one.

Watch out for Truffaut’s smile.