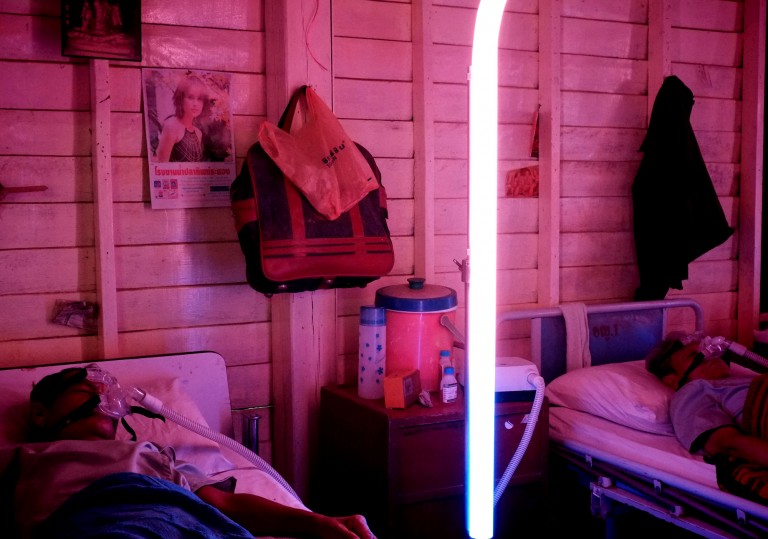 The Thai maestro’s first full feature since his big Palme d’Or win in 2010.

A vital addition to a cogent body of work.

More sedate than Uncle Boonmee, but no less radical, challenging or beguiling.

Some directors would be political agitators no matter where and when they were born: lap of luxury or otherwise, they’d find out where they were needed and bring their magnifying lens there. Apichatpong Weerasethakul (aka Joe), though, doesn’t seem like he’d necessarily take on the Haskell Wexler model of his own accord. He was trained at the Art Institute of Chicago, and some of his earliest (and indeed, most recent) shorts are works of pure abstraction; 1999’s Windows will look very familiar to anyone who once plugged a video camera into a TV and then tripped out on the resulting crude 2001-climax special effects.

Circumstances, though, have dictated a different path, and context has always inflected rural bliss-outs. In its final title cards, 2002’s Blissfully Yours reveals that one character was a Burmese migrant deported slightly thereafter; 2006’s Syndromes and a Century was banned in Thailand because its final shot (of two monks playing frisbee) was deemed an insult to the dignity of Buddhism. In promoting his latest film, Cemetery of Splendour, Joe has said that this is probably his final film to be shot at home; life under the Thai military junta has finally rendered working freely a near-impossibility. Perhaps South America’s jungles – lush and green enough to enable continuity with his arboreally grounded work – will be next.

First we hear the usual ambience of country creatures chirping, then incongruous mechanical grinding. Repeatedly returning to his past and his parents’ profession as rural clinic doctors – a setting common to Blissfully, Syndromes and Uncle Boonmee Who can Recall his Past Lives – Joe disturbs the location this time with an opening view from a verandah as tractors tear up the landscape. The follow-up is no more reassuring: soldiers with guns direct a camo-covered truck. This hospital is for military men whose narcolepsy erratically comes and goes, often leaving them in extended comas, which can serve as a starting metaphor for a political apparatus that’s unpredictable in its activities.

Joe’s regular star Jenjira Pongpas (please, call her Jen) is back once again, on call as a spirit amanuensis that helps comatose soldiers communicate with their loved ones. There is a plot, but it’s typically hard to summarise; per semi-usual, there are casual encounters with amiable spirits in human form and a scene of group outdoor exercising to peppy music. The major new visual additions are the glowing tubes installed over the soldiers’ beds; slowly transitioning from strong reds to intense blues and verdant greens, they’re supposed to aid sleep. Positioned at equal distances from each other, they’re an eerily shaded internal forest analogous to the one outside.

One jolt is entirely new to Joe’s stylistic lexicon: while eating lunch in the canteen area, Jen sees a soldier who, immediately after praising the food, slumps straight into his plate in a sudden attack of the sleeping sickness; the suddenness and loudness of the impact he makes is almost a shock scare. The final shot of Jen’s unaccountably spooked face is the look of a victim still processing; beneath this film’s typically warm and relaxing atmosphere, a national and political crisis is more angrily apparent than ever.

The Thai maestro’s first full feature since his big Palme d’Or win in 2010.

A vital addition to a cogent body of work.

More sedate than Uncle Boonmee, but no less radical, challenging or beguiling.