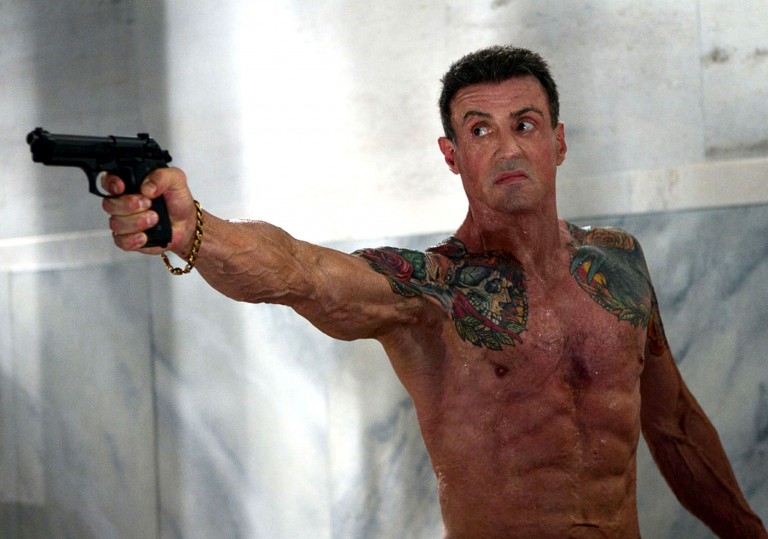 Hot on the heels of Arnold’s Grand Day Out, Sylvester Stallone gives it his muscular, mumbling best in this shambolic popcorn frenzy from has-been action director Walter Hill.

Though Stallone’s name is given top-billing the real star here is Jason Momoa, brilliant and criminally underused as the granite-jawed thorn in our hero’s side. Looking like a meaner, slightly less wardrobe shy descendant of Khal Drogo, Momoa’s Keegan is an exemplary movie villain – a scowling, hulking shitbag who incurs the wrath of Stallone’s gnarled New Orleans hitman, Jimmy Bobo (yup…), after a dive bar double-crossing leaves his partner toe-tagged.

Is Stallone getting more casually racist with age? Or has better scripting allowed him to get away with dropping the occasional xenophobic zinger in the past? Either way, there’s nothing funny about lines like, “Why don’t you go read some tea leaves?” and “Whaddya gonna do, bring out some kung fu from the homeland?” – especially when they’re dribbled out by an antiquated, incomprehensible old sod. Memo to Sly: it’s time to get with the programme and drop the stereotyping schtick.

That small but significant grievance aside, this thuggish man flick has few saving graces. Throw together a needlessly convoluted plot concerning dodgy land dealings and a maniacal African war lord, a fidgety cameo from a wired Christian Slater and a truck-load of paint-by-numbers mercenary heavies, and you’re left with an overseasoned and undercooked slab of action-comedy apple pie.