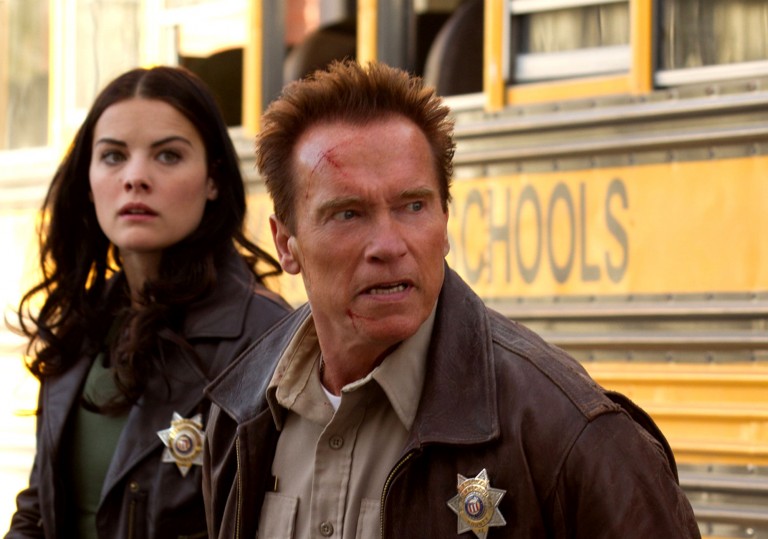 An action star is (re)born.

It remains to be seen whether Schwarzenegger can fully resurrect his acting career.

A lot has happened in the life of Arnold Schwarzenegger in the decade since his last starring role in Terminator 3: Rise Of The Machines. Now, after consecutive false starts in the form of strongman package holiday The Expendables and its high blood-pressure sequel, the man with the billboard-busting moniker is back to resume his place at the head of the action table.

He plays Ray Owens, a former LAPD cowboy-turned-bordertown Sheriff who’s unwittingly about to become the US government’s last line of defense against a high-profile fugitive. After an awkward preamble in which Arnie engages the locals of Sommerton Junction in some wholesome and wholly unconvincing smalltalk, we jump cut to a daring raid on an FBI prisoner convoy that puts playboy cartel boss Gabriel Cortez (Eduardo Noriega) on a collision course with sweet lady justice.

Having been ordered to stay the hell out of the way and let the FBI clean up their own mess by Forest Whitaker’s crotchety senior agent, Owens does the obvious thing by throwing together a squad of trusted (and some not so trusted) peacekeepers – Jaimie Alexander, Luis Guzmán, Johnny Knoxville, Rodrigo Santoro and Zach Gilford – before tooling up and bedding down for a good honest standoff.

Schwarzenegger might not be the one-man battalion he once was, but he’s not just here to stick out his chest and act tough while the supporting players have all the fun. This is his show all the way. He’s kept himself in good shape during his break from acting and, though a little off the pace these days, it’s to his credit that this slower, cuddlier, have-a-go-hero Arnie manages to hold his own in a film that boasts distractingly impressive set pieces and high-octane combat in spades. His methods may be more pragmatic, the wisecracks and payoffs less punchy, but he still knows how to get the job done.

If this is to be the start of the Schwarzenegger resurgence (which it very much looks like it is), then save a footnote for South Korean director Kim Jee-woon, who gives his leading man all the best lines and the biggest toys in the sandbox while ensuring that The Last Stand is always more than an idle throwback.

With Stallone’s Bullet To The Head and John McClane’s Russian jolly forthcoming, fans of ’80s action cinema have never had it so good. Not in this century. And yet The Last Stand isn’t quite the emphatic comeback many were hoping for. It ticks all the right boxes, but ultimately shares more with your average second-string Arnie vehicle (see: True Lies, Raw Deal, Red Heat) than any of his most iconic films.

Of course, the welcome home banners obscure an inconvenient truth, that Schwarzenegger’s self-imposed hiatus came at a time when his bankability was at its lowest ebb. It’s not simply a case of picking up where he left off. In many ways he still has a lot left to prove. Who better though to fill the Arnie-shaped hole left in Hollywood’s heart than Arnie himself? The man who has made a hobby out of self-reinvention, for whom failure has never been an option.

Dissenters will argue that, at 65, Schwarzenegger no longer has what it takes to carry a $30 million blockbuster, let alone another franchise installment, which if reports are to be believed we may not have to wait long for. Try telling him that.

An action star is (re)born.

It remains to be seen whether Schwarzenegger can fully resurrect his acting career.