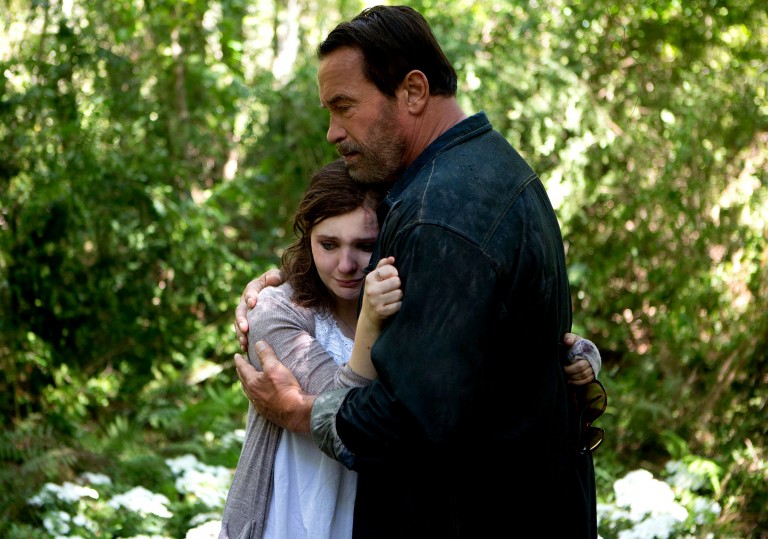 Since 2012’s The Expendables sequel Arnold Schwarzenegger has – for better or worse – stuck to making the kinds of macho popcorn movies that require him to mix it with combative drug cartels and cutthroat mercenaries.

Maggie, then, marks his first proper dramatic role since, well, ever. He plays a taciturn Midwest farmer named Wade Vogel whose eponymous daughter from a previous marriage (Abigail Breslin) is slowly turning into a zombie. Wade’s new wife Caroline (Joely Richardson) is understandably less than impressed when he decides to rescue Maggie from quarantine, thereby putting the entire household – including their two young children – at risk. But, as anyone who’s familiar with Arnie’s oeuvre will attest to, sometimes poppa’s gotta do what a poppa’s gotta do.

If you’re already buoyed by the prospect of Arnie showing off his serious acting chops, it is with a heavy heart that we report that Maggie is a total bust. Imagine if midway through filming Interstellar, Christopher Nolan suddenly lost interest in space/time travel and decided to reshoot the entire movie around the scene in which Matthew McConaughey’s Cooper bids a teary adieu to his daughter. No action, no excitement, just two-and-a-half grinding hours of cloying Sophie’s Choice-style decision making followed by a long, solemn embrace between a father and his child.

Maggie may be an inexact approximation of the hypothetical scenario presented above, but in unanchoring itself from the genre to which it ostensibly subscribes, director Henry Hobson leaves us with a drab family melodrama in which the zombie apocalypse backdrop is purely incidental. If it sounds like we’re bagging on Maggie on the grounds that it’s not the film we expected to see, it’s worth noting that Hobson spends the entire time desperately trying to convince us that this is anything other than a horror movie, despite the fact that it’s quite clearly a horror movie.