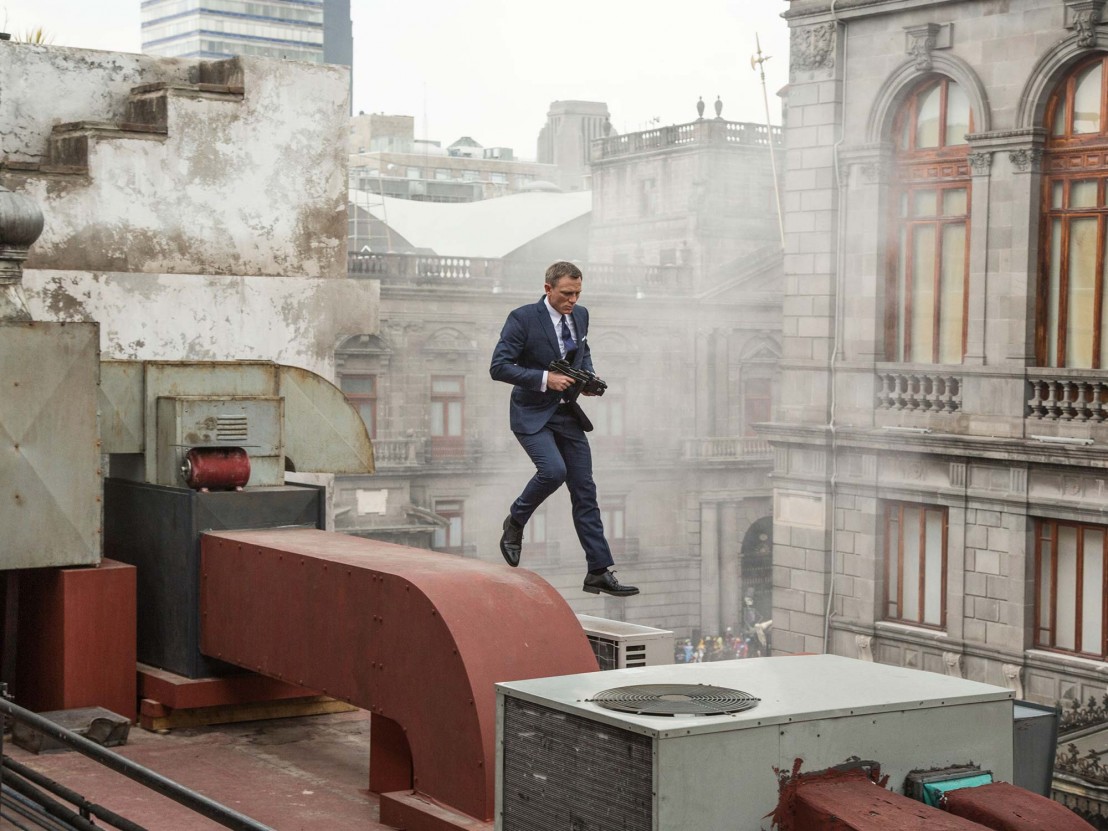 I’ve been thinking a lot about Spectre since seeing it, even though – full disclosure – I must admit to not caring for it a great deal. There was an aspect to the film which only struck me 24 hours after viewing – that with Spectre, British director Sam Mendes has in fact made a zombie movie. Glib, crackpot and unstable though the thought may sound, it derives from a set of subtle background details in the film, and is not a comment on the listlessness of the performances or the dynamism of the action. Whether these details are intentional is tough to discern. James Bond goes about his standard man’s man travails in a world which is almost entirely depopulated. And when we do see people, they act with a responsiveness that’s redolent of the living dead.

I realise I’m straying into fertile spoiler territory with this one, so I promise to tread carefully. It’s perhaps no coincidence that the film opens on the Day of the Dead festival in Mexico City with throngs of revellers clad in skeleton/lady ghost garb, all having a gay old time. Yet instead of simply accepting that there are real human beings under those ornate masks, Mendes has these masses loiter in the streets and squares as mayhem erupts all around them. Buildings are levelled, the prospect of an extremely violent death hovers mere meters above their fragile heads. And yet their emotional synapses are so slow, they remain in place to bestow the big set piece its element of high danger. It’s like a circus act where two jugglers pass flaming wands across the face on an unwitting audience member who has to stand perfectly still. Yet why would these people refuse to scatter to save themselves as the city tumbles around them?

There are two instances later in the film which corroborate this theory, albeit in a completely different ways from the above. Where the opening scenes shows braying, swaying masses, the remainder of the film is coloured by an eerie absence. One of the secondary nemeses in the film is a thick-necked brute named Mr Hinx, played by WWE mainstay, Dave Bautista. The pair race through the streets of Rome in muscle cars, and luckily for them, there’s no-one on the street to get in the way of their high speed duel. It’s an extremely strange sequence, as it appears as if the entire centre of Rome has been cleared out for the filming. As such, danger levels plummet accordingly. The classic car chase in William Friedkin’s French Connection has attained its classic status because the action occurs in a densely populated zone and the risk of death is made to feel high. Spectre ushers in a handy, momentary apocalypse for Bond to play safety first street racing. There’s no-one around to die, or no-one for Bond to save.

Later, there’s a hand-to-hand dust-up on a moving train. While Bond and his beau, Madeleine Swann (Léa Seydoux), share a quiet drink in their evening garb in the buffet car, Hinx spoils the party once again. Even though it’s a commercial carrier, when the fight starts and we actually get to see more of the train, it is revealed – like central Rome – to be completely desolate. Even when the pair parry through the kitchenette, there’s no chef in there to barge out of the way. (Maybe Hinx politely forewarned fellow passengers of ensuing carnage prior to his big entrance?). But the combat takes place on an empty train. Of course, the intention is that viewer focus is trained tightly on the impact of fists and the strain of chokeholds, and you do really get a sense of the physical endurance of such a sequence. But the question remains: where is everybody?

Making these observations is all well and good, but the question remains: why? I can think of three possible answers, all of which are a farfetched in their own way. The first is that it is the physical manifestation of Bond’s eternal loneliness and the difficulty he has making meaningful emotional connections with “normal” people. If this is the case, it’s a very strange and heavy-handed directorial strategy which serves to alienate more than it does to enrich the material. The second would be as a nod to Mendes’ theatrical roots, and that the reason for all anti-clutter tactic is as some Brechtian manoeuvre to emphasise the essential unreality of the character and of the series. But that doesn’t stick either, as this is the Bond era in thrall to reality, to framing Bond as a man rather than a comic formulation.

The third reason is that it’s an oblique reference to the film’s central theme of covert surveillance becoming the preferred method of national security. A question at the centre of the film concerns the rise of digital spy networks and the ways in which they naturally supersede the need for human soldiers (eg, Bond). Is Mendes making a statement in favour of the Double O programme by suggesting that we have this incredible technology that can be employed for nefarious means, but it’s not worth a jot if there’s no-one there to actually spy on. People deserve their privacy, and in removing traditional extras from the scenery, Mendes is emphasising that fact – people should not cast a digital shadow. Zombie movies are about the transition of the public into an anonymous mass, and Mendes is in favour of the anonymity, even if it’s at the expense of realism.