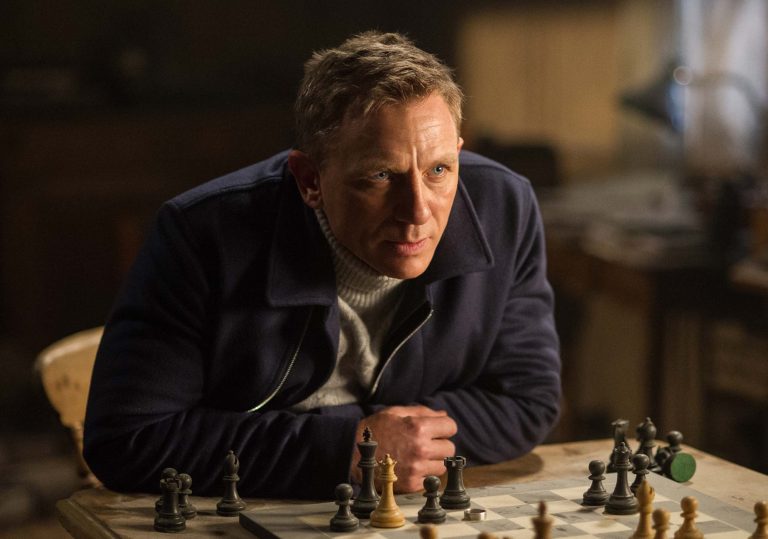 Fifty years of the franchise in microcosm.

The first time we see Daniel Craig in Spectre, his face is obscured by a ghoulish mask. An establishing intertitle reveals that we’re in Mexico City during its annual Day of the Dead festivities. Which would explain the spooky disguise. More specifically, this image reaffirms a fundamental truth about James Bond: here is a fictional character that refuses to fade into the pop culture ether, locked in a state of perpetual transition between the old and the new.

It’s this conflict that forms the basis of Spectre, a film primarily concerned with the flow of data and how in our hyper-connected, cloud-based, post-Snowden world, power is increasingly held by those who control that flow. That Bond should appear so conspicuous hiding in plain view in his fancy dress get up is indicative of his unwillingness to adapt and adopt new methods. Change being the dominant theme here, what’s most telling is that it doesn’t stop him getting the job done.

In many ways Spectre is the purest Bond experience of the Craig era. Stylistically, it’s a film that looks and feels like a modern action movie – clearly no expense was spared in executing the pulse-quickening aerial stunts and seat-shaking set-piece pyrotechnics that break up the shaggy plot. For all that the 24th instalment in the franchise is unavoidably a 21st century spectacle, however, narratively speaking it is underpinned by a reluctance to break from tradition.

Never has Bond felt so out of step with the world around him, but that doesn’t mean he’s about to let himself become obsolete. MI5’s impending merger with a flashy new intelligence agency means the Double O programme once again faces an uncertain future. Andrew Scott’s Denbigh, codename ‘C’ (that’s the joke), wants to bring “British Intelligence out of the darkness and into the light,” by introducing cutting-edge technology that will make field agents redundant. It’s up to Bond to prove the value in having your top assets on the ground, ready to squeeze the trigger.

In Spectre we’re told that a licence to kill is also a licence not to kill, that even an elite assassin who by his own admission doesn’t know how to stop has a moral choice to make whenever the time comes to take the decisive shot. The wider implication here is that, in an age where governments deploy drones to do their dirty work and where cyber warfare and 24/7 surveillance have become leitmotifs of Western culture, it’s this human fallibility that keeps us coming back to Bond.

Craig’s 007 is an all-purpose, all-weather icon whose unwavering commitment to queen and country and unerring conviction makes him indispensable. The threat in Spectre, then, is largely born out of the suggestion that Bond – like the franchise itself – has become cynical and predictable. But while the existential crisis brought on in Skyfall continues to give his enemies the upper hand, Bond’s absoluteness remains as bulletproof as his modified Aston Martins.

At 148 minutes, Spectre is the longest Bond film, yet that doesn’t make it any bolder or more ambitious. The tone is set early on by Sam Smith’s theme song (which starts off sounding like a watered down version of Michael Jackson’s ‘Earth Song’ and gets progressively worse from there), the accompaniment to an opening credits sequence – all swooning silhouetted waifs and bullets streaming through plumes of smoke in gratuitous slo-mo – that shows Bond at its most dangerously antiquated.

And while much has been made of Monica Bellucci’s casting (at 51, Bond’s most mature love interest), in reality her part is nowhere near significant enough to constitute real progress. Ostensibly the part of ‘strong female lead’ is played here by Léa Seydoux, but although Madeleine Swann is introduced as Bond’s intellectual and spiritual equal, she is always the object of Bond’s (and by extension the audience’s) gaze. This shouldn’t really come as a surprise – lazy misogyny and passive female archetypes are sadly as much a part of the fabric of Bond as Martini and innuendo. Still, it’s regrettable that Seydoux is given so little to do.

What really sets Spectre apart is the acknowledgement that no matter what’s at stake, no matter who gets to strut his stuff in a crisp white tux and have his way with exotic strangers, the franchise will – for better and worse – forever be tethered to Fleming’s original creation. This is the life Bond has chosen (or technically the one chosen for him); the only one he knows. That’s quite a melancholy sentiment when you stop and think about it. James feels it, too.

As in Skyfall, Spectre sees him forced into the shadows, renounced by the organisation that owes him an unpayable debt. Forced to go it alone, Bond suddenly appears vulnerable, his position weakened further by his mysterious personal connection to Christoph Waltz’s enigmatic villain, Franz Oberhauser, a subplot previously alluded to in the godawful “the author of all your pain” line from the trailer. At times even Bond’s masculinity is called into question, most notably in bruising clashes with Dave Bautista’s Mr Hinx, the brutish henchman with a manicure to die for.

Familiarity and nostalgia being the franchise’s stock in trade, Bond’s allies are never far away. Naomie Harris is reliable without being allowed to challenge the perception that Eve Moneypenny is essentially a glorified PA who occasionally gets to pop off a few rounds. Ralph Fiennes? The new M has his moments, but the highest praise you could heap on Fiennes is that Judi Dench’s absence is never felt. Then there’s Ben Whishaw’s Q, who over the course of the last two films has quietly established himself as MVP.

It’s thanks to Whishaw that Q and Bond’s unlikely chemistry works, the lighter moments between the pair routinely hitting their mark. Elsewhere the quippy one-liners and knowingly cheesy pay-off lines are less effective. Spectre never forgets to have fun, but aside from an opening couch gag Matt Groening would be proud of, the film’s lack of visual wit and charm is symptomatic of the derivative nature of the relationship between Bond’s past and present.

Fifty years of the franchise in microcosm.