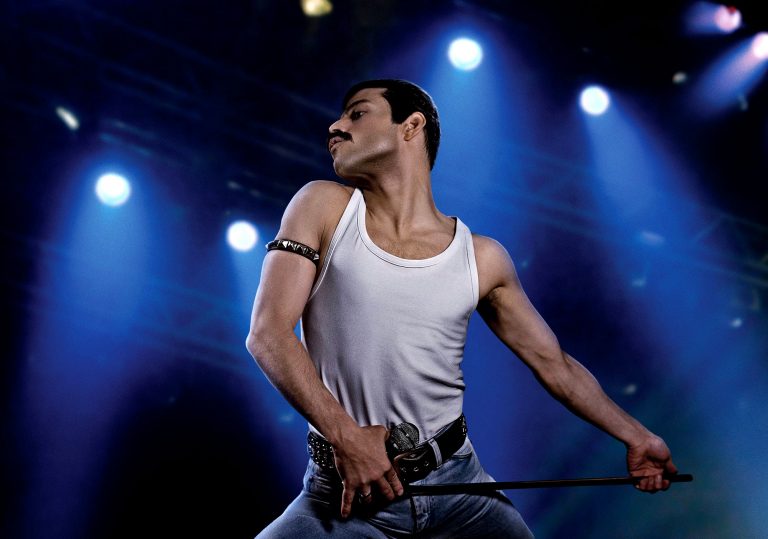 Approaching this with much trepidation given the troubled production history.

Toothless mass-market pop revisionism which is no where near as cool or compelling as its subject.

As much as tea and crumpets or Buckingham Palace, the music of Queen is tied up in all notions of Britain’s collective nostalgia. It’s as if we all come out of the womb preprogrammed to know the stomp-stomp-clap refrain of ‘We Will Rock You’, or instinctively recognise John Deacon’s bassline from ‘Another One Bites the Dust’. Parents dust off their vinyl for their kids, couples sling ‘You’re My Best Friend’ on their wedding playlist as if it’s second-nature. So tied up the band are in our national identity and unique pop culture, any director was going to struggle to make a biopic which did justice to their extraordinary legacy – in particular, their one of a kind frontman, inimitable troubadour Freddie Mercury. Enter the worst man for the job: Bryan Singer.

With a troubled production history dating back to 2010, Bohemian Rhapsody was once set to be a very different beast, with Sacha Baron Cohen originally lined up to play Mercury. After Cohen left the film in 2013 due to ‘creative differences’, he was replaced by Paddington Bear himself, Ben Whishaw, with Sunshine on Leith director Dexter Fletcher attached. Eventually, by early 2016, Whishaw had been replaced by Rami Malek, and Fletcher by accused sexual predator and X-Men director Bryan Singer.

With heavy involvement from the surviving members of Queen and friends of Mercury, a vision began to take shape – at least until Singer was fired from the project in December 2017, and replaced by original director Dexter Fletcher to complete the project. However, it’s Singer’s name on the poster, and with him the blame must lie for this misjudged attempt at hagiography.

The story opens on Mercury (Malek) awakening on the morning of 13 July, 1985, preparing for Queen’s iconic Live Aid performance. From there Singer rewinds 15 years to Queen’s inception, with Freddie meeting Brian May (Gwilym Lee) and Roger Taylor (Ben Hardy) and later John Deacon (Joseph Mazello) as well as Mary Austin (Lucy Boynton) who would become his closest friend. What follows is a whistle-stop tour of Queen’s journey from student band to stadium fillers, centred on Mercury’s magnetic presence and the life he led off-stage as well as on it. 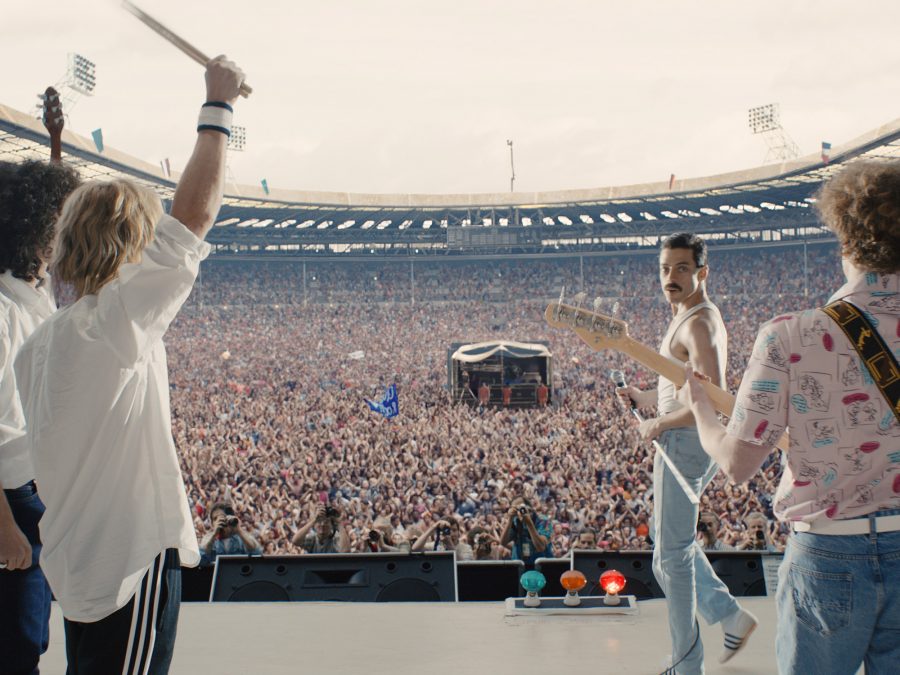 For his part, Malek is perhaps the best version of Freddie we could hope for, enthusiastically strutting his way around the stage and doing his best to capture the charisma which has made Mercury such an enduring pop icon. Yet the prosthetics used to replicate Mercury’s overbite seem cartoonish, and in close-ups of Malek, you become acutely aware that he’s just…not Freddie Mercury. No one can be. It feels like Malek’s throwing his all behind the approximation, but that’s all it ever is – robustly confirmed by the fact that all the performances in the film seem to have been overdubbed with Mercury’s vocals (Malek has said it’s an amalgamation of Mercury and his own voice, but to the average listener, Freddie is all you hear).

The rest of the band don’t fare much better. It’s wise to centre Bohemian Rhapsody as Mercury’s story, but we never gain any sense of who Brian, Roger and John are – or even Mary Austin, Mercury’s former fiancé turned lifelong friend. These character shells appear as pure souls who try to save Freddie from the unsavoury influence of his ne’er-do-well personal manager Paul Prenter (Alleen Leech), who is squarely positioned as the source of all Mercury’s troubles. Similarly, Jim Hutton (Aaron McClusker), who was Mercury’s partner for six years until his death in 1991, is little more than a footnote.

These figures are all trapped in Mercury’s orbit, but we don’t gain much sense for how they shaped his life, or indeed how he shaped theirs. Opportunities to explore Mercury’s identity – in particular, his relationship with his Parsi Indian family – are missed, and even the attention paid to his sexuality feels cheap, with one scene contrasting the recording of ‘Another One Bites the Dust’ with Mercury visiting a gay club. In fact, the film seems to absolve Mercury of any personal flaws or mistakes, painting him as a naive victim of his own success rather than a man with his own agency and desires. (Sidebar: Mike Myers turning up to play Northern record exec Ray Foster – and cracking a Wayne’s World joke – is a hot contender for most toe-curling cinematic moment of the year.)

Distracting technical flourishes such as blurry cameras and quick zooms take away from any potential resonance of the acting, and even Malek’s best attempts at emulating Mercury during the performance scenes fall flat due to cheap CGI crowds and awkward quick cuts which take away from the magnetism he’s trying to create in his wide-eyed showmanship. It doesn’t feel like the work of a seasoned director (or two of them, in fact) but rather a garish, gushing student project that’s got wildly out of hand.

It’s nowhere near as interesting or absorbing as its central figure, and in glossing over the elements of Mercury’s identity and life which are so vital and important to many – his race, sexuality, and the fact he was the first major rock star to die of AIDS – Bohemian Rhapsody leaves a sour taste. This is a revisionist attempt at painting Mercury in primary colours suitable for audiences who’d rather just bop along to the Greatest Hits than think about the man who shared his gift with the world until it killed him, and Freddie deserves so much more.

Approaching this with much trepidation given the troubled production history.

Toothless mass-market pop revisionism which is no where near as cool or compelling as its subject.