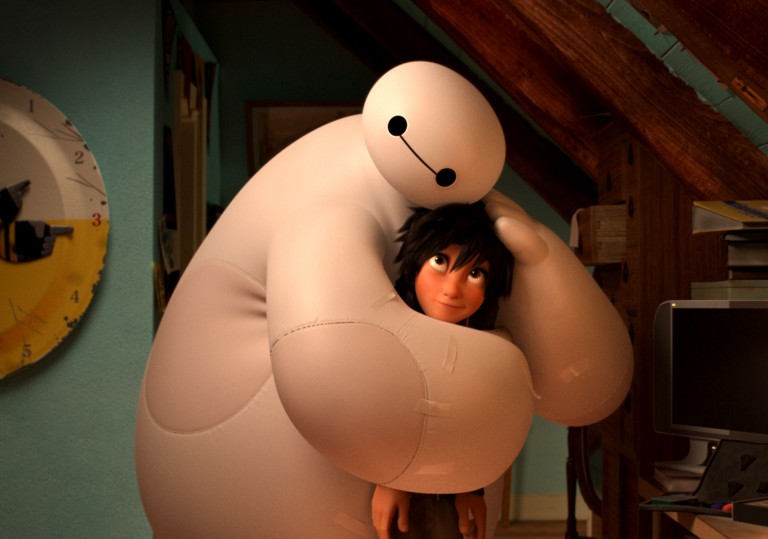 Disney does Marvel! Just not a Marvel comic you know...

Heartfelt, wise, and full to the brim with character.

Slight, perhaps, but a genius gateway drug for a new generation of super-fans.

Let’s start with an understatement: Walt Disney Animation Studios’ 2013 musical fantasy Frozen did pretty well. Be that at the box office, at the Oscars, in merchandise stores the world over, or stuck deep inside the heads of anyone within earshot of its insufferably catchy tunes. Now, for the first time in two decades, Disney is on top, and they’re not willing to let it go.

To follow Frozen’s stone-cold success, Disney have rummaged around in their enviable IP archive and unearthed an almost-forgotten Marvel Comics series from the late 1990s. Fed through the Disney creative meat grinder, this finished film bears little relation to its ‘source’ comic, but one key relationship survives the transition, that between young, gifted boy-scientist Hiro and his robotic buddy Baymax.

The Disney Touch comes in this reimagination of Baymax as a Pillsbury Dough Boy/C-3PO hybrid, as adorable as he is marketable, and the delicate – if tidy – ways that the character is intertwined with the film’s Key Themes. Hiro, a 14 year-old tearaway, is barely kept in check by his conscientious elder brother Tadashi and overworked aunt Cass, but the opportunity to study robotics gives him some direction and purpose. However, disaster strikes, Tadashi is lost in a tragic accident, and Hiro is left with only his brother’s university project, the healthcare bot Baymax, for company.

With this emotional core, namely processing and working through grief, in place, Big Hero 6 conjures up a relatively rote (yet, at 92 minutes, undeniably breezy) animated adventure tale. A mysterious villain soon comes on the scene and sets about terrorising San Fransokyo (imagine a colourful spin on a near-future East-meets-West megalopolis), and Hiro suits up Baymax as a jerry-rigged superhero, and convinces a handful of fellow students to harness the power of their learning for the purpose of fighting evil. Plot aside, though, there’s no end of pleasure to be found in the film’s exciting set pieces, exquisite animation and eccentric characters (Baymax himself is a delight).

With its rich subtext, Big Hero 6 feels like a minor riff on two films by former Disney and Pixar animator Brad Bird, The Iron Giant and The Incredibles. But unlike Bird’s masterpieces, this film has an ulterior motive, and a deliciously underhand one at that. Big Hero 6 is a PG, which the BBFC classes as suitable for kids ‘aged 8 and over’, in other words a generation of filmgoers who were born in the wake of, or grew up alongside, the releases of Iron Man and Marvel’s subsequent ‘cinematic universe’.

As sequels, crossovers and events further expand (and complicate) that universe, Big Hero 6 seems like a training-wheels super-primer, an introduction to the tropes and tricks – tragic origin stories, heroic sacrifice, Marvellous post-credit cameos – that the nippers will gleefully recognise once they’re old enough for the likes of Guardians of the Galaxy (a 12A) and Captain America: The Winter Soldier (a 12).

To craft an engaging, exciting family adventure complete with tender life lessons and a merch-friendly cuddly robot pal is one thing. To maintain corporate creative synergy across generation gaps? That’s the familiar Disney magic, right there.

Disney does Marvel! Just not a Marvel comic you know...

Heartfelt, wise, and full to the brim with character.

Slight, perhaps, but a genius gateway drug for a new generation of super-fans.