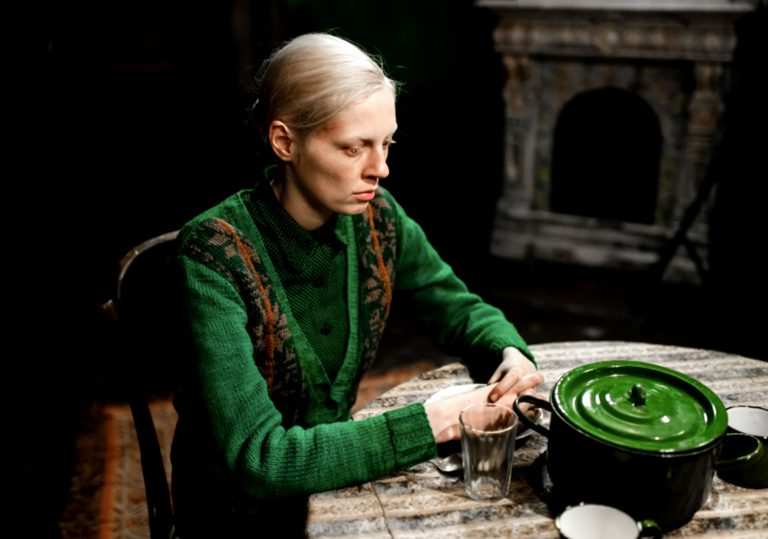 ‘Enjoy’ might not be the right word, but it’s easy to lose yourself in it.

A gorgeous, glacial exploration of lives permanently changed by war.

Perhaps the most illustrative moment in Kantemir Balagov’s second feature comes early, as a group of injured soldiers ask a young child to do an impression of a dog. Upon the boy’s confusion, they realise, “Where would he have seen a dog? They’ve all been eaten.”

Inspired by the book ‘The Unwomanly Face of War’ by the Nobel Laureate Svetlana Alexievich, Beanpole depicts the new rules of a world thrown off its axis, every character we encounter trying to learn how to live with having their previous lives washed away, and the lasting wounds, both physical and mental, left by war.

The most complicated trauma belongs to Iya (Viktoria Miroshnichenko), a young nurse and former soldier working in the ruins of postwar Leningrad, following its siege by the Nazis. Iya is nicknamed ‘Beanpole’ for her unusual height, and perhaps for the freezing fits that cause her to go into a catatonic state, losing control over her limbs and voice. It’s a strange manifestation of PTSD, and perhaps the film’s greatest strength is its delicate detailing of the myriad of ways in which trauma, particularly over the loss of bodily autonomy, reveals itself.

From this point, both attempt to work through their trauma in different ways: Iya retreats into herself and continues to follow commands as she seeks to repay an emotional debt to Masha, who is almost predatory in how she pursues others to help heal herself and regain some semblance of normalcy. Eventually, this drives the women apart.

Their relationship is powered by a thinly-veiled lesbian subtext; Miroshnichenko and Perelygina’s intense but contrasting performances make it increasingly obvious that theirs is less a friendship than a tentatively romantic yet toxic relationship, ultimately defined by a struggle for control over Iya’s body.

Kseniya Sereda’s cinematography bathes the bold greens of the costumes and interiors in a sickly yellow light, dotted with occasional splashes of red in dresses or blood-soaked gauzes. The disrepair of the city mostly exists on the film’s fringes, as its production design focuses more on the details, looking at the cracks in wallpapered interiors instead of the devastation outside.

While the more explicit moments threaten to disrupt its delicate study of repressed misery, Beanpole is a beautiful, glacially-paced story of women trying to reclaim their former lives. With gorgeous photography and small moments of kindness and hope, Balagov avoids the miserablism typically associated with a Soviet-era setting; he charts the range of human responses to trauma with great care.

‘Enjoy’ might not be the right word, but it’s easy to lose yourself in it.

A gorgeous, glacial exploration of lives permanently changed by war.