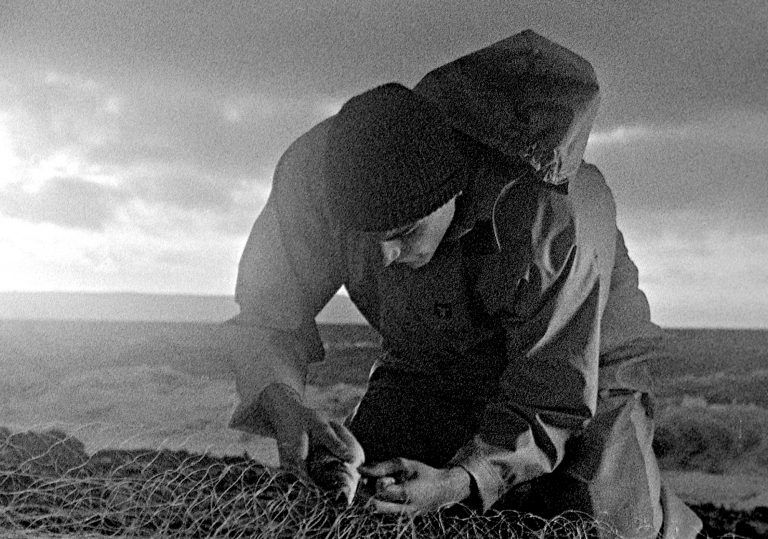 This one has a whiff of ‘film studies grad project’ about it.

Strange, spellbinding and timely. One of the most thrillingly original British films in years.

‘The view may be beautiful, but you can’t eat it.’

With Robert Eggers’ The Lighthouse and now Bait, 2019 is quickly becoming a banner year for experimental seafaring cinema. This half-mast monochrome gem from writer/director Mark Jenkin takes a somewhat trite and mundane subject – the gentrification of a Cornish fishing community – and spins it into a visually arresting expressionist mood piece that’s quite unlike anything you’ve seen before.

Filmed on location using a 16mm Bolex camera with black-and-white Kodak stock, it’s a flinty requiem for a rapidly vanishing way of life and a vital shot in the arm for British social realism.

Taciturn fisherman Martin (Edward Rowe) is quite literally rudderless, his brother Steven (Giles King) having turned their father’s trusty vessel into a pleasure boat for daytrippers. Compounding Martin’s malaise, the harbourside cottage he was raised in is now occupied by a couple of London yuppie types, who have splashed chintzy faux nautical decor all over the place. “Been modernised,” Martin laments to Steven. “Bloody ropes and chains – like a sex dungeon.”

As tensions between the locals and seasonal tourists simmer, Martin continues to ply his trade by casting a partially worn-out net from the shoreline and stashing what little cash he makes into a kitchen tin labelled ‘boat’.

While the narrative is anchored in contemporary concerns about the loss of regional culture and traditions, the analogue equipment and old-school editing techniques Jenkin employs give the film a distinctly archaic look and feel. High-contrast cinematography, overdubbed dialogue and extreme close-ups combine to immersive effect, creating the impression of discovering a lost relic of early cinema that’s been freshly salvaged from an old shipwreck.

Jenkin owes a debt to the pioneering documentary work of John Grierson and Robert J Flaherty, but as an example of elegiac post-modern ethnography, Bait is entirely its own thing.

This one has a whiff of ‘film studies grad project’ about it.

Strange, spellbinding and timely. One of the most thrillingly original British films in years.

‘The view may be beautiful, but you can’t eat it.’