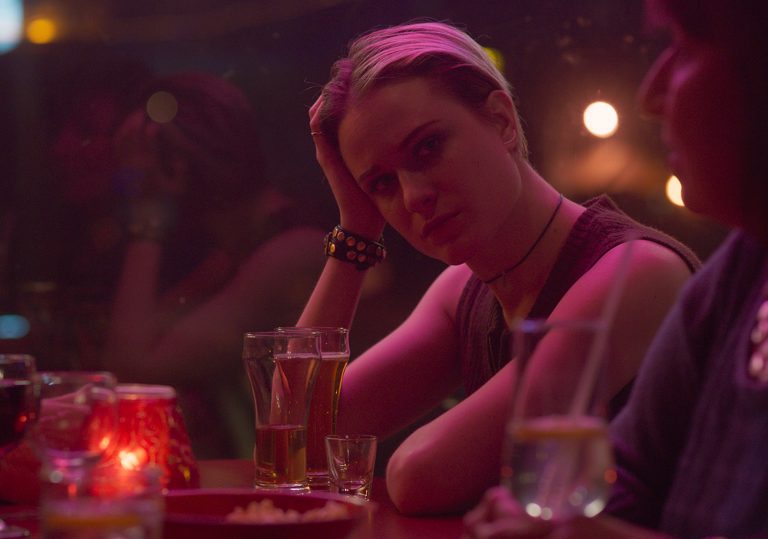 Subtly takes its time telling us what we already know from the start.

A woman sits up and inhales. This is the first thing we see in Allure, the feature debut of brothers Carlos and Jason Sanchez, previously best known for their work in photography. “What the hell’s wrong with you, you crazy bitch!” a man tells the woman, after they have had disengaged, violent intercourse that puts her very much on top and leaves him feeling exploited and emasculated.

Allure may open with a sex scene, but it is defiantly unsexy: mechanical, angry, abusive, and ending abruptly in the frustration of both participants. The woman is 30-year-old Laura (Evan Rachel Wood), a house cleaner working for the company owned by William (Denis O’Hare). When we first meet William, he seems to be an old ex of hers – but we soon learn that he is actually her father, anxiously indulging her destructive sexual behaviours with co-workers and others out of familial obligation. “Anyone else would be fired for this,” he says – but he keeps her on, and keeps an eye on her.

Meanwhile, Laura is drawn to 16-year-old Eva (Julie Sarah Stone), who is deeply unhappy that she must move in with the new boyfriend of her cosseting mother (whose house Laura cleans). “You don’t have to let your mother make your decisions for you, or control your life,” Laura reassures Eva, with an irony that will only gradually become apparent, and so she encourages Eva to move in with her instead, without telling anyone. As police search for Eva, Laura shifts from being cool big sister to controlling mother – with an inappropriate sexual element coming between the women as well – and Eva finds herself a prisoner, physically but also psychologically.

Allure is the story of an abusive relationship (or of two, actually). For as we watch Laura manipulating, gaslighting and emotionally blackmailing her confused and sexually inexperienced young ward, it is clear that this is a replay of Laura’s own traumatic loss of innocence. If Laura, in all her isolation and conflicted neediness, becomes ‘sugar mama’ to Eva, she also has a sugar daddy who is giving her employment and accommodation both to assuage his own guilt and to keep her close.

Shot by Sara Mishara in (mostly) long shots and subdued colours, Allure adopts a certain clinical distance from its three main characters which somehow – paradoxically – both eschews moral judgement and invites sympathy. Everyone here is caught in the toxic damage of someone else’s desperation, and although the film is for the most part rigorously realist in its presentation, occasional shots of someone (it is too dark to tell who exactly) sinking and drowning in liquid shift the film’s themes of emotional suffocation to the realm of metaphor.

Subtly takes its time telling us what we already know from the start.