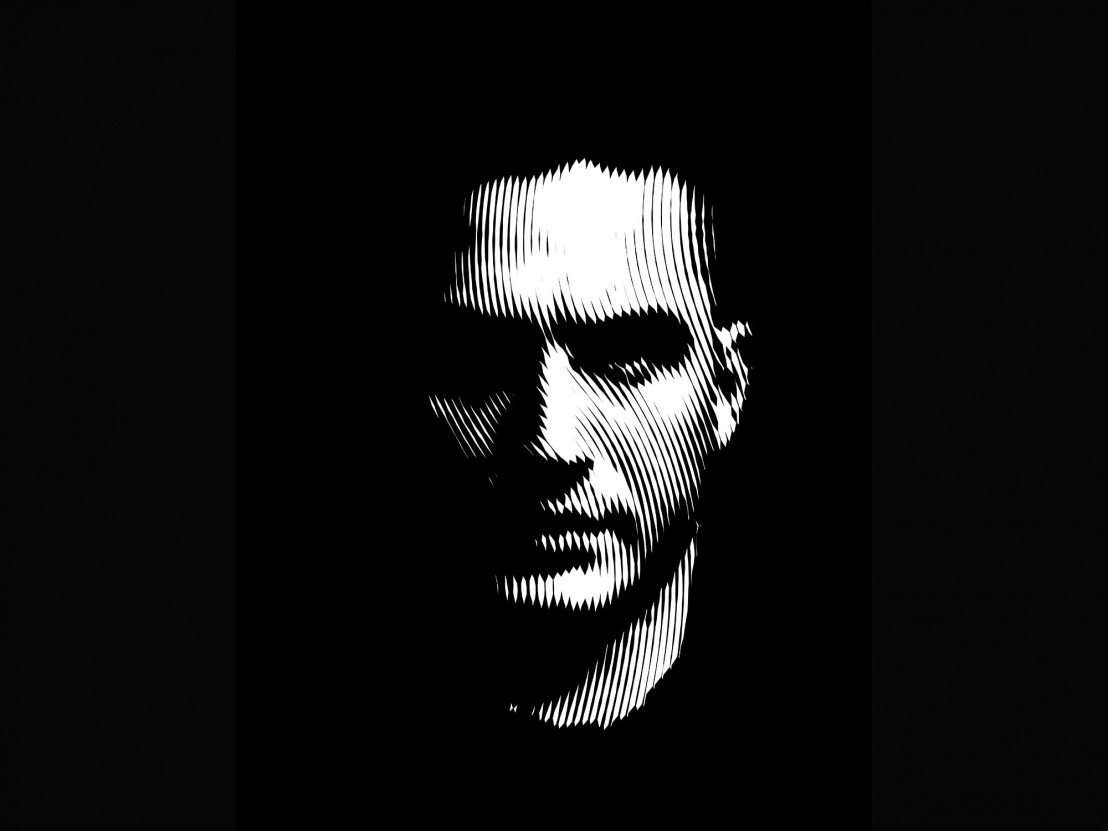 Ask Tom Hardy about his tattoos and he’ll lift up his shirt to reveal them. Our impromptu show and tell session has barely begun before LWLies is staring at Hardy’s naked torso and the tapestry of motifs that cover his chest, shoulders and upper arms. “Every one reminds me of something in my life; an event, a person, a place,” he explains.

Almost the entirety of Hardy’s top half is adorned with a constellation of keepsakes and memories he’s been steadily accumulating since he was 15. There’s a Union Jack emblazoned above his heart (“To remind me where I come from”), and across his collarbone the words ‘padre fiero’ (‘proud father’). Elsewhere, Hardy’s fiancé, ex-wife and the mother of his son each have their own special tribute. But it’s the enflamed pink flesh surrounding his freshest ink that catches the eye. “I got this a couple of days ago,” he reveals, framing a pinch of skin above his right bicep between thumb and forefinger. ‘II O&R’. “To observe and reflect,” translates Hardy. “My acting creed.”

It’s not uncommon to be greeted in a personable manner by a high-profile star, but Hardy’s readiness to expose himself so early in our meeting comes as a surprise. This cordial, unguarded disposition is entirely at odds with the tough guy persona he exudes to such formidable effect on screen. No sooner has the ice broken, however, than the mood turns sour. Hardy picks up a copy of LWLies 41 positioned on the footstool in front of him, leafing through before pausing on a spread. It’s the ‘Time to Die’ visual feature comprising photographer David Houncheringer’s darkly compelling ‘Do You Want to Die Today?’ collection.

He scans each image with furrowed intent; tucking the unruly russet beard he’s been growing for the past three months into his chest while keeping his eyes locked on the page. In a bid to snap Hardy out of his trance, LWLies offers some context, explaining that the photographs represent each subject’s chosen fantasy death scenario – that it’s just art. Silence. Then the seemingly innocuous but near fatal question slips out: what would your scene be?

In one swift motion Hardy drops the mag and spins a full 90 degrees. We’re now inches apart. Nose-to-nose. As if the elongated S-shaped sofa we’re sharing has coiled violently, forcing us to invade each other’s personal space. “I really don’t appreciate you asking me a question like that,” Hardy growls. His fierce, penetrating eyes are fixed in an unblinking stare. “Have you ever had a near-death experience?” he asks.

“I’m speaking from experiential hindsight and I can tell you it’s not something to be taken lightly. If you want to talk to me about death you’ve got to come from that place. It’s like asking someone, ‘How many people have you killed?’ You understand what I’m saying?”

Sensing Hardy is on the verge of cutting the interview short (or something worse) LWLies extends an olive branch, making it absolutely clear we’re not here to unsettle or antagonise him. He sits back, takes a moment to collect himself and gestures for a change of subject. But almost immediately Hardy jolts forward again. “I’m sorry, man… You’ve just touched on a spot that’s very sensitive. You have no idea how close to something I am right now in my personal life. No fucking idea. It’s not your fault, I understand that, but you’ve really struck a nerve.

“I don’t want you to get the wrong impression of me,” he continues, “I don’t want you thinking I’m a dick. Genuinely, that question, what it evokes, is very close to home right now. Those photos just really freaked the shit out of me. At the moment I’m very close to some shit that you’re touching on that’s very, very serious. You’ve pushed a massive button in me and I’m just not really in a place to talk about what’s going on right now. I wish I could get into it with you, but this ain’t the time or the place. Death is a very serious reality to me.”

Irrespective of whatever recent personal trauma has made mortality such a sensitive issue, his heated reaction reveals something of the non-defeatist attitude that has come to define Hardy’s turbulent 12-year pursuit of stardom. Today, he’s one of British cinema’s most in-demand exports, having established himself as a brazen scene-stealer in Inception and Tinker Tailor Soldier Spy, and more recently landing meaty roles in Lawless, The Dark Knight Rises and next year’s Mad Max reboot.

Hardy’s battle with the demons of his early celebrity came to a head in 2003, when he voluntarily entered a rehab clinic for alcoholism and crack addiction. After getting clean he found work with a small theatre company, took up writing and slowly made his way back onto the screen through a string of TV dramas. As far as the film industry was concerned, however, Hardy was tainted. No studio was willing to touch him. The scripts dried up. Then Hardy’s friend, Kelly Marcel, approached him with a rough draft of a screenplay written with him in mind for the lead role. They took it to a UK distributor who re-wrote it, fired Hardy and brought in Jason Statham. The Stath had it rewritten again then walked away, before it eventually fell into the lap of Nicolas Winding Refn.

Suddenly, Hardy was back in contention, but he still had to convince Refn he was the right man – the only man – for the job. “Nic didn’t take much of a shine to me at first,” Hardy admits. “I fought damn hard to make Bronson happen. I think the thing that swung it for me in the end was the fact I was doing it for me. It got to the point where I just thought, ‘If I never get another shot at Hollywood, fine.’ I wasn’t doing it for the fame anymore; I was doing it for the love of acting.”

The sweet irony is that Bronson became Hardy’s calling card after it went down a storm Stateside. From looking destined to be remembered as just another hot young burnout, suddenly Hollywood was abuzz with talk of a ‘British Brando’. “People really took notice. Doors that weren’t open before were beginning to peek open,” he reflects. “Things totally changed for me after that because I let go of so much; of swimming against the tide, of the fear of facing hurdles and worrying about failure.” Through sheer grit and stubbornness Hardy had risen to his feet and, with nothing to lose, he set his sights on breaking America.

The following summer he signed on to Warrior, but after months of prep work the studio decided he wasn’t going to make the grade. He was deemed uncredible, not bankable enough. Even the MMA experts who trained him said he’d never make the weight to be a convincing fighter. Hardy wouldn’t have it. He went away, hit the gym and packed on 13kg of solid muscle (a physique he would regain in order to portray Bane in The Dark Knight Rises). Recognising Hardy’s mettle, the studio changed its mind. “Doing Warrior was the biggest change in terms of my career because it was my first American movie,” he explains. “It was a huge transformation, not just a physical one but a cultural one.”

The huge emotional and physical strain Hardy has endured over the course of his career, coupled with the slim margin of actors that make it to the top of the pile, makes his current ascendance all the more improbable. In truth, his entire journey has been against the odds. Hardy studied at two private schools but struggled academically, a failing he attributes to his short attention span and lack of guidance. He was an overactive child with an addictive personality. By the time he left school he was unemployable, reckless and growing up fast.

Hardy hit 20 before he was finally encouraged to constructively channel his self-professed narcissism. But while the pleasure he took from performing in front of an audience validated his move into acting, once more it was the doubters that stoked the fire. “I’m an addict,” confesses Hardy, “which means if you tell me I can’t do something I’ll do it. If I tell myself I want to do something, however hard or gruelling it might be, I’ll do it. Even if it terrifies me. You’ve got to be an absolute fucking nutcase to pursue a career in acting,” he continues. “Either that or you need to really believe in what you’re doing. Everyone who said I’d never make it gave me that self-belief.”

Given what it’s taken for Hardy to get to this point, it’s no wonder he doesn’t take matters of an existential nature lightly. The night before our conversation, Hardy joined his fellow Lawless cast members alongside director John Hillcoat at the film’s world premiere in Cannes. “Surreal and unfamiliar,” is how Hardy describes the experience of being escorted by motorcade to the red carpet. On arrival he was greeted by baying crowds of paparazzi and adoring fans. “I felt like a movie star,” he beams, “like how I’d always imagined movie stars feel.”

You get the impression, though, that none of it – neither the adulation, the fame nor the wealth – would mean a thing to Hardy if he weren’t able to share it with the people who have pushed him all the way. “Seeing myself up there on the screen and having my fiancé and parents by my side, I sensed this release in them, like their faith in me had been rewarded. For the first time I felt that release, too. I was able to see where I was and I realised, ‘Fuck, it’s taken 12 years to get here.’ It’s taken this long to arrive; I’m not going to let go now. I don’t want to die today.”