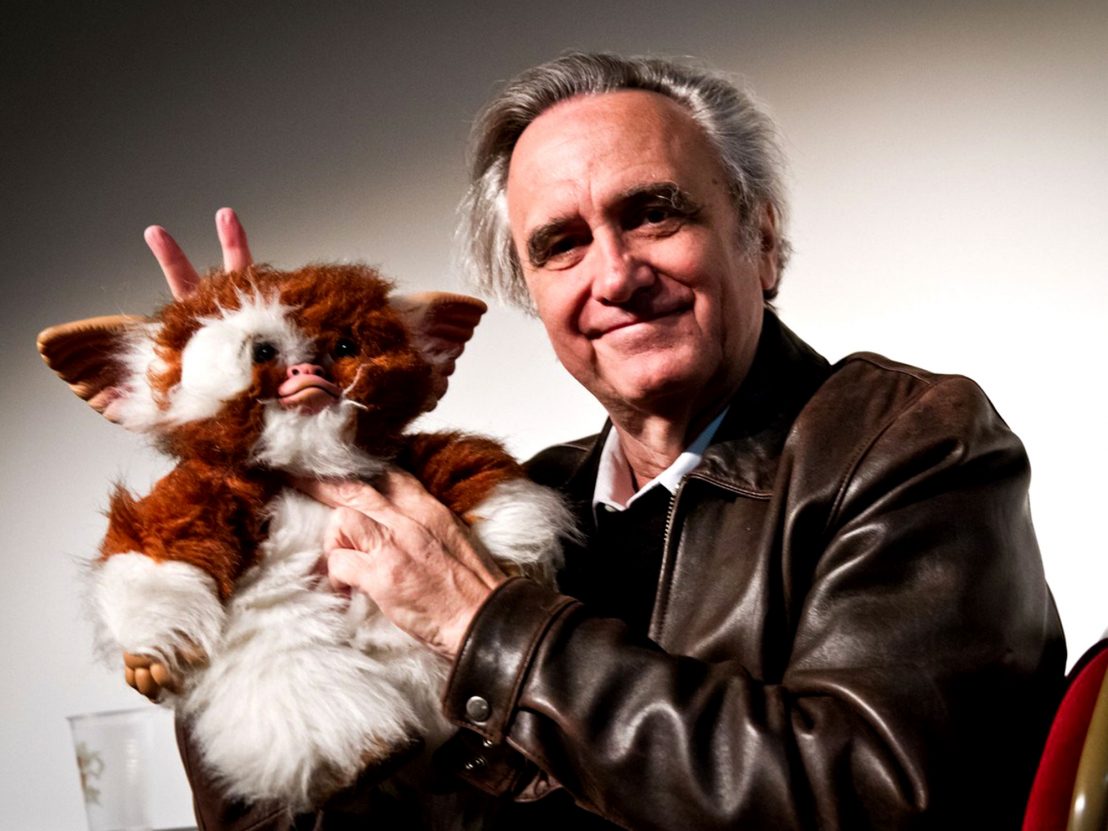 “My first thought was that it had come to the wrong address,” recalls Joe Dante on receiving the script for Gremlins, the small town monster movie that would ultimately become his calling card. Having brought a trio of terrors to life starting with schlock horror Piranha in 1978, werewolf tale The Howling in 1981 and a colourful segment in 1983’s ill-fated resurfacing of The Twilight Zone, Dante was carving out a curious niche for himself as a Roger Corman kid with devilish flair. That’s when Steven Spielberg came knocking.

“I had no idea that Spielberg would know who I was or would have seen anything I’d done,” reflects Dante. “I was unaware that there was a little legal brouhaha at Universal about Piranha because they were upset that it was going to compete with Jaws 2. Spielberg apparently saw the movie and said, ‘No, it’s a spoof, it’s okay’, and we got to release our picture without legal trouble but during that period apparently he became aware of me. He saw The Howling, from which he hired Dee Wallace to play Elliott’s mother in ET, so I was on his radar.”

Meanwhile, a spec script from then-fledgling screenwriter Chris Columbus landed on Spielberg’s desk. In it, he’d found the perfect shoestring fantasy to kickstart his new family-friendly venture, Amblin Entertainment. All he needed now was a director. “I don’t know how many other people he sent the script to or if he sent it to anybody,” admits Dante. “The Howling had been a relatively inexpensive movie and I think he figured we’ll make this picture as a really low-budget horror film. Spielberg thought it was the perfect picture to start his company with.”

But when production got underway it became clear that their little monster movie was a much bigger beast than either had considered. “It became apparent that it was going to cost more to make this picture more palatable,” explains Dante. “The impression was we’ve got to make this for a wider audience than just horror fans, so it’s not going to be so gruesome and the mother’s not going to have her head cut off and have it bounce down the stairs and the Gremlins aren’t going to eat the dog.”

These pre-production tweaks not only impacted the direction of Columbus’ script but also its overall tone. “It became somewhat more whimsical, at least in the Gizmo character, who was originally intended to bite the dust after the first couple of reels and become the head Gremlin. But Steven liked the design of the character so much he wanted it to stay around for the whole movie, which made it much more of a kids movie than it was intended to be. In Chris’ original script the lead character is 12 years old, and in an effort to get teenagers we bumped his age to 18 – but his best friend is still 11.”

The next challenge Dante faced was the daunting task of bringing his creatures to life. First stop: Gizmo. “We had a number of different designs,” Dante says. “Chris Columbus drew some drawings with the script. The Gremlin drawings were particularly similar to the Gremlins in the movie, but the Gizmo drawings were kind of all over the place. Steven would constantly say, ‘No, it’s not quite right,’ and we were getting close to the deadline where we really had to have something to shoot. So we had the idea to make Gizmo the same colour as Steven’s cocker spaniel and that seemed to get us over the hump. He approved that and it became the design that went into the movie.”

With Gizmo in the bag, all Dante had to do now was teach his Mogwai co-star how to act. “When he was originally designed he could do certain things that were asked for in the script, but he was very small and mechanical and had all these little gears in him. That was fine for a limited amount of scenes, but once he had to carry the movie, have reactions and be a character, there was no way a puppet that small was ever going to be manipulated into big close-ups. So we had to build a giant Gizmo head which was really kind of frightening to see. It was very expressive and we were able to use it quite a bit. I don’t think we could have ever made this work if we hadn’t spent a little extra time and money to make that character a little more believable.”

As for bringing the Gremlins to life? All ideas were welcome. “We did briefly flirt with the idea of having a monkey play a Gremlin. We had a research monkey brought in. They put a Gremlin head on it and he went beserk, jumped all over the room and shat all over everything. At the time there was no CGI, there were just puppets and there was no way any live animal was going to be able to do all the things these characters were suppose to do. We did have a very good live animal. We had a great dog who was convinced the Gizmo puppet was real. He couldn’t figure it out and was fascinated with it. The dog gives one of the best performances in the picture.”

According to Dante, it was a gruelling shoot (“The whole thing was so exhausting”) and once Gremlins was in the can, the reaction was divisive. “The Studio really didn’t quite get it,” he remembers. “They were saying, ‘Why are the Gremlins so gross?’ Why are there so many of them? Steven said, ‘Well, we could cut them all out and call it “People” but I don’t think anybody’s going to come.’” Luckily, audiences had a different reaction. “It was phenomenal. I’d never seen a reaction like that,” Dante says of the film’s first preview. “They thought it was the greatest thing ever and Warner Brothers was I think shocked, frankly, by how popular the picture became.”

Today the legacy of Gremlins is alive and well. “It’s the movie I’m going to be remembered for,” Dante admits candidly. “If I get hit by a bus tomorrow the headline is going to be ‘Gremlins Director Hit By Bus’. I’ll never do something that’ll outlast that in terms of the public image of who I am – which is fine with me. It’s not my favourite movie that I’ve ever made, but I’m perfectly happy with it and I think it does what it was suppose to do. It’s strange that it’s outlasted so many other pictures that were much more prestigious at the time. It expresses my personality too, which is the one thing that’s the most difficult to get across in an expensive film.”