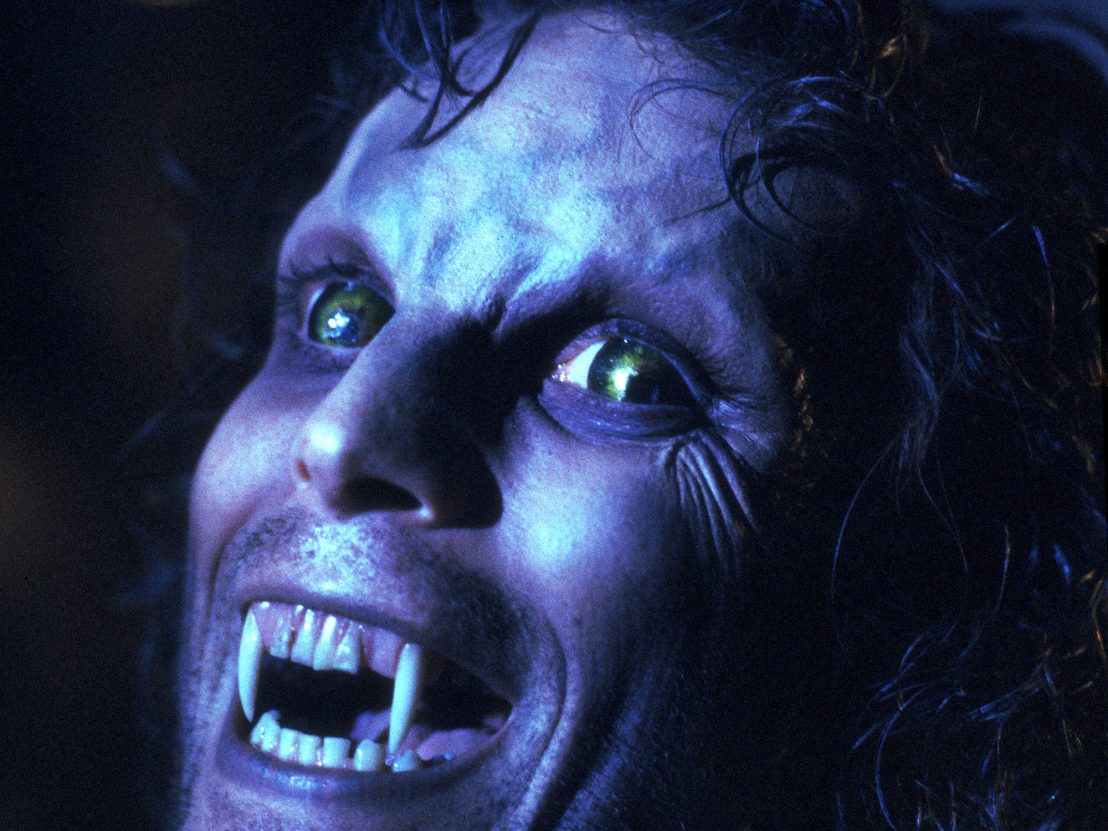 “Man is a combination of the learned and the instinctual, of the sophisticated and the primitive. We should never try to deny the beast – the animal – within us.”

The speaker is Dr George Waggner (Patrick Macnee), a mild-mannered author and behaviour expert who is appearing on KDHB TV to pitch his latest book ‘The Gift’ – and who just happens to share his name with the director of Universal’s 1941 classic, The Wolf Man. Meanwhile, this prologue to The Howling enacts precisely the contradiction that George is discussing on air. On the one hand, it is rapidly edited (by Mark Goldblatt) and mediated, cutting from the television studio where Waggner is being interviewed to the production booth and back again, while also showing the item being broadcast live on a television set in a room festooned with creepy newspaper clippings and sketches.

At the same time, KDHB anchor Karen White (Dee Wallace) is out on the streets following a scoop that is also a dangerous sting operation, as she tries to make contact with a serial killer who has been attacking, biting and murdering women in LA’s Skid Row. Here the sophistication of an urban news network intersects with the bestiality of the killer. When Karen meets creepy Eddie Quist (Robert Picardo) in the viewing booth of a porn shop – a place where the city’s men furtively indulge their animalistic impulses – she sees something so horrifying that her mind erases the traumatic memory of it.

On George’s advice, Karen heads north up the coast with her husband Bill (Christopher Stone) to ‘the Colony’, a littoral refuge where patients undergo primal therapies under the doctor’s direction. The Colony may be a hideaway from the stresses of city living, but it is still not so very far removed from modernity. Its endless beach parties, sing-a-longs and barbecues recall the free-loving experiments of recent decades, and at one point it is expressly compared to the cultic commune of Jonestown.

In other words, it is a place thoroughly in keeping with George’s pronouncements on finding a balance between old and new. And yet, there are also grumblings and growlings against this compromised model. Old man Erle (John Carradine) mutters madly about his dissatisfaction with affairs, while ‘elemental’ Marsha (Elisabeth Brooks) and her brother TC (Don McLeod) live by their own rules out in the woods on the Colony’s periphery. And there is something else out there, watching and circling and killing the cattle and howling. 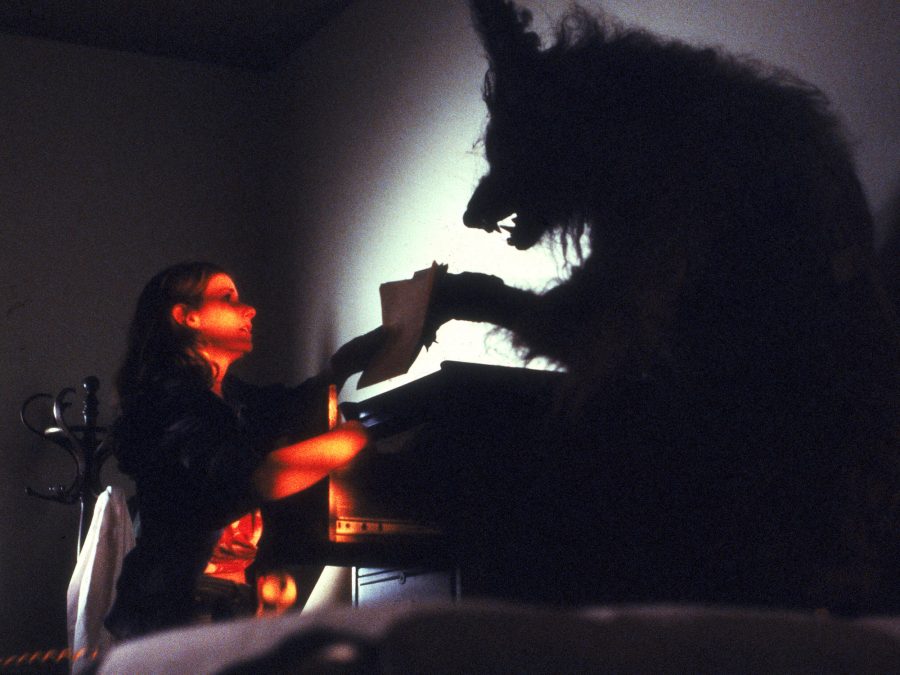 For modern viewers, it is well-nigh impossible not to know that The Howling is a werewolf movie. Indeed, it was one of three, alongside Michael Wadleigh’s Wolfen and John Landis’ An American Werewolf in London, to come out in 1981, all revitalising the lycanthropic sub-genre with new ideas and state-of-the-art effects. Yet it is important to observe for just how long the film suppresses its true identity, before finally letting the beast out.

Reuniting after their successful collaboration on Piranha, director Joe Dante and writer John Sayles carefully withhold any notion of the supernatural at the beginning of their film, at first focusing on all-too-human monstrousness before eventually settling on that Universal creature that combines both monster and human in hybrid form. For The Howling starts as a psychological thriller, with an amnesiac heroine and the promised return of her repressed memories, and only gradually transforms into a full-blown werewolf movie.

What The Howling gains from the slowness of this metamorphosis is metaphorical heft, as the film repeatedly asks what shape the traditional lycanthropic mythos (glimpsed within the film in second-hand grimoires, in illustrations from Little Red Riding Hood, and on background televisions showing snatches of The Wolf Man) can take in the modern era. “Times have changed,” frets George, “and we haven’t – not enough.” He is giving expression to the central anxiety of a film that keeps reflecting upon its own relevance and place in a world where people are not even sure that they believe in the moon landings, let alone in the other monstrosities that they see on their TV screens every day.

The Howling is very loosely adapted from Gary Brandner’s novel of the same name. Sayles, himself a successful indie writer/director always happy to earn money on the side to fund his own projects, was called in to have a pass at earlier drafts by Jack Conrad and Terence H Winkless, and essentially rewrote the script, filling it with his characteristic wit and irony (although Winkless is still credited as a co-writer). Sayles also cameos as a morgue attendant, while B-king Roger Corman can be spotted waiting outside a telephone booth for Karen to finish making her call.

The transformation effects were originally designed by Rick Baker, but then handed over to Rob Bottin when Baker went to work on to An American Werewolf in London. Executed with makeup, latex and prosthetics, they remain impressive, offering us visual evidence of a phenomenon that the film repeatedly reminds us leaves witnesses unable to believe their eyes. Still, whether we are convinced by what we see or not, we should never try to deny the beast within…

The Howling is released by Studio Canal as a newly restored edition DVD, Digital Download and Blu-ray on 9 October, 2017.