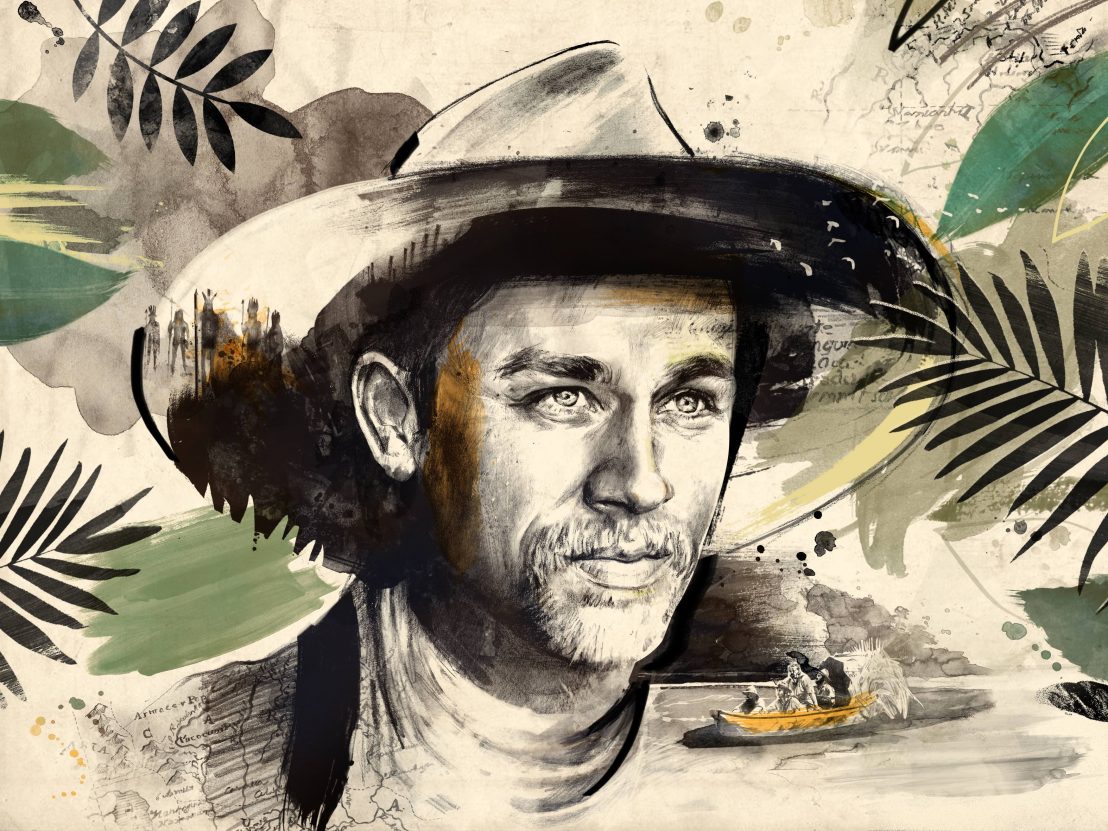 It’s rare to find a commonality with an in-demand movie star, but as we sit down to begin our chat, Charlie Hunnam absent-mindedly fiddles with the tamper-evident band on his water bottle. He breaks it apart and lines the pieces up in his hand. If I had a bottle in my hand, I’d probably start doing the same thing. It’s a small, disarming detail that speaks to the actor’s easygoing, approachable nature. We spoke about his roles in The Lost City of Z, King Arthur: Legend of the Sword and Papillon, and the different demands each film placed on him.

LWLies: Did you shoot King Arthur and The Lost City of Z close together?

Hunnam: Yeah, I had 10 days between wrapping Arthur and starting this.

What was it like going from working under Guy Ritchie to James Gray?

Not as big of a transition as one might imagine. Ultimately, I always try to put as much truth and personal experience into the interpretation of a role, and although their processes are very, very different, my process is the same. The requirements were much heftier on Lost City, and I was much more aware of them and the job I was going to have. I suppose the biggest difference, day to day, was that there was something very concrete and absolute about what we were doing on Lost City, whereas there was something a bit more freeform on Arthur. There was a slight ambiguity around what the tone and sensibility would be when we set out on that project – although you wouldn’t imagine that because Guy has got such a specific sensibility as a filmmaker and has a brand of his own within the filmmaking community.

There was an initial aspiration to do something very different and have a departure from what you would expand from Guy. But then once we got into the film… I don’t know if it was that the film, the construct of it was demanding a lighter tone, or if it was Guy’s creative compass pulling him back to true north, but we ended up evolving out of that and into something that’s more typically Guy Ritchie. But it was difficult to pin down what that tone was going to be to begin with, which was a real challenge.

When you speak about Gray’s requirements for Lost City, can you give some examples of that?

I suppose truth is the greatest thing. He is an incredibly personal filmmaker, and so he knew the truth that he wanted to imbue the film with, and the themes of the film were things that were very relevant to him and his life. We spent… I was going to say a lot of time, but that’s actually not the truth. I think the reason that he hired me in the first place is when I went in and spoke to him, a lot of the themes that he was clearly exploring in the script felt very relevant to me and I could really relate to them, and so I guess that’s probably why he hired me. He is ultimately in search of some sort of personal truth in his filmmaking, which he demands of himself and everybody else that he works with.

If there’s any central mandate from James, it’s to deliver truth every day, as opposed to Guy, who gave me a very specific mandate. Because I can tend to be a little bit overly earnest and self-important in my approach to filmmaking, he said, ‘Forget all that shit. This is not the game we’re playing here. You have to fun every day, and if we both have fun, we’re going to make a fun film.’ I suppose that was probably, now that we’re talking about it and examining it a bit more closely, the most significant difference.

Do period films have a specific draw for you, or is this just how your roles have happened to shake out over the past few years?

Modern life… the unifying experiences of modern life are not particularly interesting to me. I’m not interested as much in telling narratives about the problems of dating in the twentysomething community in Los Angeles. That’s not of interest to me in my life, so it’s not an interest for me to tell in stories. I’m always drawn to stories that have something to do with the human condition, but using real, relatable people who find themselves doing extraordinary things. That seems to be the narrative that I’m drawn to the most.

You’re also starring in a new ‘Papillon’ adaptation this year. How much research do you do for these types of roles?

As much as possible. There’s a real sense of obligation and responsibility while playing a real person. And obviously, once you’ve done all the research, then you have to go and find the things that you have in common, and try to meet the character halfway and bring in as much of your truth to what you perceive to be the central governing principles of that life. I was really up against it on Lost City because of the short time before starting it after King Arthur, so I was limited in the amount of research I could do. But obviously I read the David Grann book that the film is an adaptation of. What was an even more valuable resource to me was ‘Exploration Fawcett’, a book compiled by [Percy] Fawcett’s son Brian, which was basically a collection of excerpts from Fawcett’s journals.

For Papillon, just in terms of our approach, director Michael Noer and I completely liberated ourselves from the expectation or the weight of viewing this as a remake of the original film. After all, it’s actually a true story and based on a very significant piece of source material. So we released that vast sense of filling the shoes of Steve McQueen or Dustin Hoffman or Trumbo or any of those guys, and really decided we were just going to be uncompromising in our approach, that this was our independent adaptation and had nothing to do with the prior movie. Which was an important distinction for us to make, because we could have just gotten ourselves totally headfucked, because it’s such a significant and beloved film, and a very important film to me in my youth, as was the novel.

Did you learn any relevant skills for Lost City or Papillon, for the sake of authenticity?

I don’t know. I never went to drama school. I went to film school to study film theory, so I don’t really know about acting technique and method and all of that kind of stuff. I feel like all actors, to one degree or another, do what they think is required of the role. Sometimes those things can very conveniently be put into the method bracket, but ultimately that doesn’t really mean anything.

Lost City deals with a lot of the sense of sacrifice that people make in their lives when they have identified a certain calling, and the compromises that they have to make in other elements of their lives. I thought that was a very important part of Fawcett’s journey, the sense of loneliness he must have felt, and sacrifice, and the weight of the sacrifice he was making with his family to carve out the time that he needed to go and do this thing that he was trying to do.

I was nervous about the breadth of the emotional journey in the film, and so I decided to do everything one can do to limit the amount of work one has to do in the moments between action and cut. So I just put myself in that situation – I cut myself off completely from the world. I didn’t talk to my girlfriend for four months. I didn’t send an email or make a phone call or have any interaction at all with the outside world, or talk to anybody on set.

On Papillon, there were sections of the film where the main character is completely segregated in solitary confinement, and for that section, I never left solitary. I slept there and lived there and remained silent the entire time and didn’t talk to anyone. I think people don’t really understand much about acting – me being one of them – but people like to give something a label. It feels convenient, so any time you talk about doing anything that would appear extreme, people like to label it as method, but really it’s just about trying to do as good a job as you can do.

The Lost City of Z is in US cinemas from 14 April. King Arthur: Legend of the Sword is released 12 May.