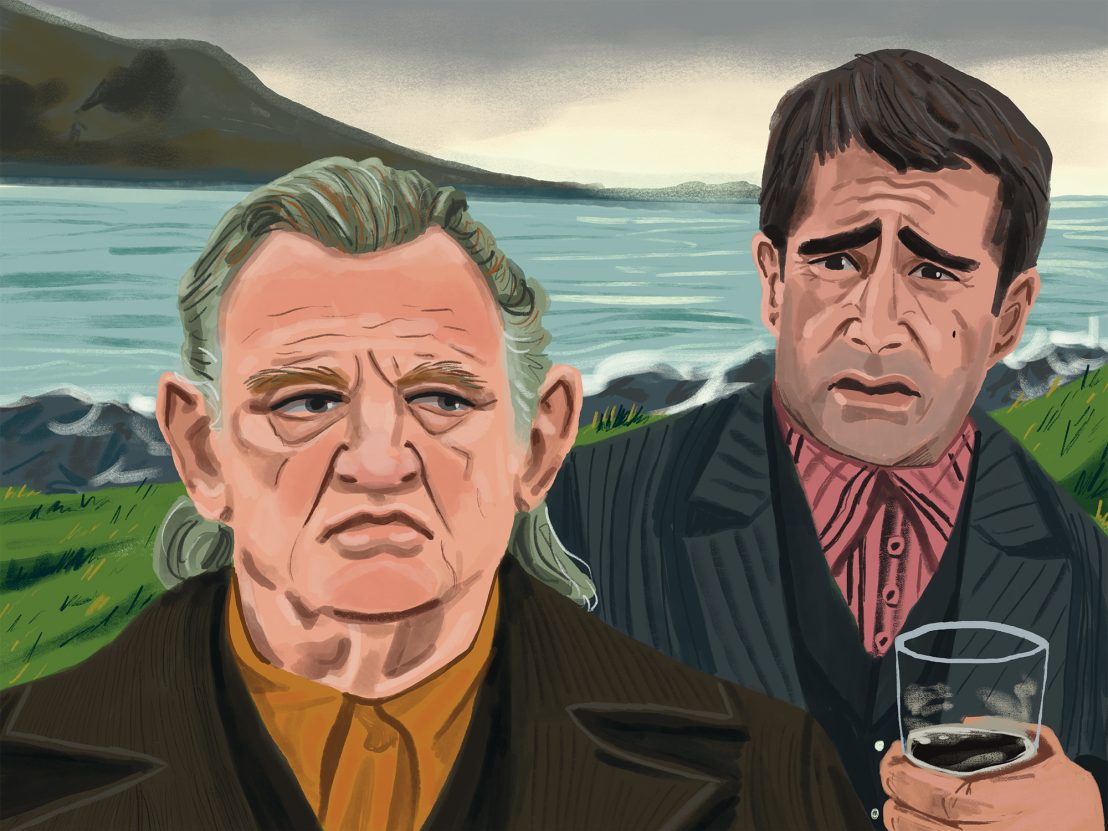 The stars of Martin McDonagh's latest reflect on their reunion on the islands of Inishmore and Achill, the scars of the Irish Civil War, and the weight of artistic legacy.

Two Irish actors at the top of their game, Brendan Gleeson and Colin Farrell have worked with directors including The Coen Brothers, Yorgos Lanthimos, Michael Mann and Justin Kurzel. Their 2008 collaboration with Martin McDonagh, In Bruges, was the beginning of a beautiful working relationship between the three, and finally they reunite in The Banshees of Inisherin, which concerns the friendship break-up between gruff fiddle player Colm (Gleeson) and happy-go-lucky farmer Pádraic. It’s a melancholy reflection on war, art, and the nature of despair, anchored by their excellent performances, with Farrell winning the Volpi Cup for Best Actor at Venice Film Festival. We spoke to Gleeson and Farrell during the Dublin leg of their press tour about artistic legacy and shooting on location in their homeland.

LWLies: How did you two meet for the first time, prior to making In Bruges?

Brendan Gleeson: A year prior to filming In Bruges I met Colin at the Chelsea Hotel in New York–

Colin Farrell: What were you doing there? Were you working or something?

BG: I can’t remember. Mary [Brendan’s wife] was around, I remember that. It was the year after Domhnall [his son] had been in The Lieutenant of Inishmore and I was trying to get this film made, an adaptation of this book At Swim-Two-Birds, by Brian O’Nolan, I was spending way too much time trying to get that made. I talked to Col about doing it, and we just struck a chord from the very beginning. I just loved the bones of the man. There was some sort of soul kinship that just worked. So we didn’t have to think too hard about it after that. Once In Bruges came along, it grew from there.

What are your memories of making In Bruges?

CF: I remember how hands on it felt and how the line between cast and crew was incredibly blurred to the point that it was almost non existent, and it felt like that on Banshees too. Maybe even more so on Banshees, because both of us had worked with a lot of the crew. Some of the first gigs I did, from Ballykissangel to Ordinary Decent Criminal – Gary Lydon was in Ordinary Decent Criminal, some of the actors were in Ballykissangel – and some of the crew the makeup, the hair.

It’s such a communal experience, bringing the Martin McDonagh story to life. I think it’s the same as well with some of his theatre, that he tends to hire the same actors over and over again because he feels a sense of trust, he feels a sense of kinship himself. And he also knows what people are capable of. But there is a kind of familial aspect to work with Martin. I remember picking up a camera and you know, shooting a scene in Bruges, and myself carrying the camera about two or 300 yards down the road to shoot the next scene. Even though the budget was like 10 or 15 million. I mean, it wasn’t a cheap film. It all felt very hands on and like everyone was so willing, from a place of love, to do justice to the word that was written on the page.

BG: Yeah, and I remember the rehearsal period for Banshees was a reaffirmation of the trust that we had felt before. If anything we discovered three weeks of rehearsal wasn’t enough.

CF: Yeah. Exactly! And you want to keep some of the material fresh for the set, you don’t want to go over it too much. But with Martin, by the second week, you’re going God, it’s still speaking to us. You ask one question with Martin’s material, and you think you come up with an answer, but the answer you think you have actually births four or five more questions, and it kept going like that…the more we asked, the more the material gave us, and by the time we got to set we felt we had a decent foundation. Familiarity breeds confidence but there’s still so much to be unearthed.

You shot on location on Inishmore and Achill Island – how did that enhance the storytelling experience?

BG: I was interested in the difference between us and the tourists who came in on the ferry in the morning and then they went off on the ferry in the evening. We got to stay and we stayed there for a long time. It was in our bones in a way, we felt a part of the island in a way that wasn’t touristy. They made us feel of the island, and we felt we had a legitimate function there. You can’t be in that landscape and not feel the power of community within the people and feel the power of the ocean. And just that the living heart, the hardship of living there, if you actually have to make a living from it. It just became infused. It was like that with Bruges too. They’re very much characters within the films. 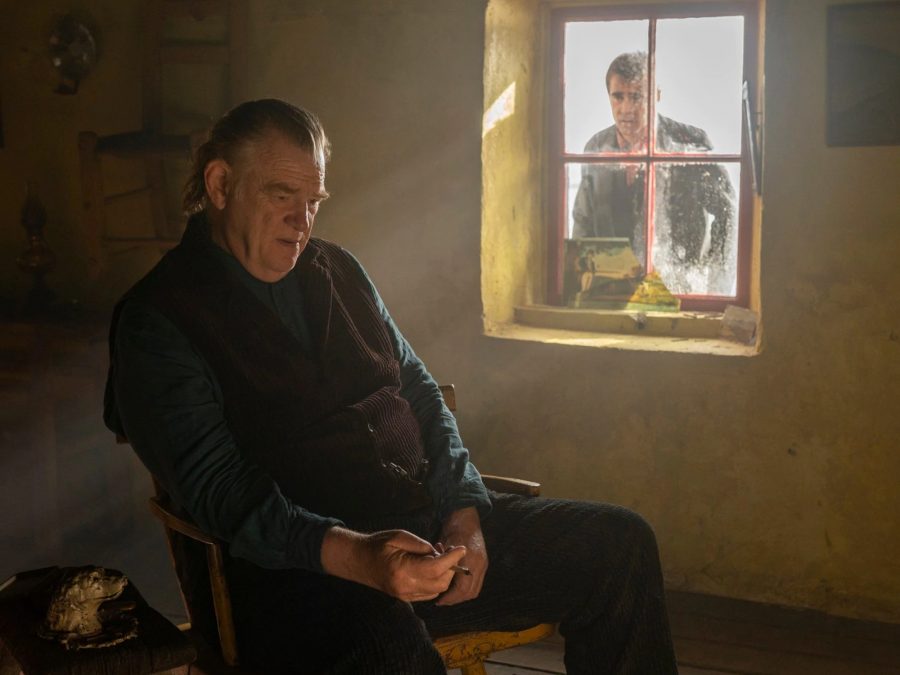 How did Martin approach you about Banshees of Inisherin?

CF: Seven years ago was the first time I got an email from Martin, who is very economical in language, saying, “Hey fella, wrote this thing, have a look at it, let me know what you think.” And it was called The Banshees of Inisherin at that stage, it was the third in a trilogy of stories. And it was I thought it was brilliant. But it was a lot more plot-driven. There was a lot more violence. There was a big shootout at the end and it was super dramatic. The civil war didn’t just exist as a, albeit horrific, abstraction in the distance, it came to the island. So it was a bigger story in that way.

But Martin decided that it wasn’t good enough, and he didn’t want to do it. Then about three years ago or four years ago, he sent the version that he revisited and the first two minutes stayed the same, with him [points at Brendan] saying ‘I don’t like you no more, I’m not going to be friends anymore.’ That remained the same, but then the rest of the film unfolded in a much more intimate way. I think Martin just leaned into the depths of sadness, and the despair that was at the core of these men’s lives. It’s just his despair at the beginning, but despair being as infectious as it can be, is also mine by the end. You know, I’m glad Martin rewrote it because the film as it stands now, compared to what he wrote, is slightly less cool perhaps but cool wasn’t what we were going for. It became more disturbing and it became more tender and personal.

What does it mean to you to be making a film like this, which is having this huge global release, but at its core, is very much about Irish history and Irish culture?

BG: The Civil War is the context of the film and I’m familiar with that, as it’s 100 years since the war and I just finished a voiceover for RTE on a programme that examines the Civil War. It’s taken a century for us to be able to address it. It’s been very wounding and very divisive. We weren’t taught about it in school. So now we’re finally facing it as a nation, and it’s more than time to face it. People can find a truth on both sides of this relationship, and there was some terrible tragedy on both sides. But the nature of identity is massive in the Civil War, and it’s massive in Banshees, and your survival as somebody that is integrated within yourself.

I fear Ukraine could be put in a similar situation, if they have to partition, and it’s everywhere you look, like the civil war situation in America, where you can actually shoot your brother, your cousin, your father, because the war informs some core element of who you are. It did inform me – the fact that we did shoot each other across the mainland – with this movie because it’s about this idea of ‘I am this person, this is who I have to be at whatever cost.’

Colm is very preoccupied with the idea of creating something that lives on after he’s gone. As artists, how do you feel about the prospect of your legacy?

BG: As an actor you’re trying to connect the writer with the audience, that’s really what you’re doing. And within that, then there is an expression of your own self, but really that’s what you’re trying to do. And arts generally, as a function within society – the French put it at the very core of who and what they are, in a way that I continually want the Irish states to embrace it as an essential, not an added extra.

BG: Yeah. During Covid, we were actually called essential workers for the first time, and we were allowed to keep making television and movies because it was felt we were essential to the well-being of people. They need people to be transported from being isolated and unable to communicate. What I want in terms of legacy is to feel that you’re making an impact somehow. I love that this film will live for however long, and then it will continue to make a connection. You’re buying into a kind of a stream of human expression, and that to me is important.

CF: Yeah, if you can draw a line of connection in the immediate between yourself and the material, that’s the place to start. Not every time that I go to work do I feel that connection, and that depth of feeling, and the kind of provocation of thoughts that I felt working on Banshees, and In Bruges, and a couple of other things through the years. It’s the exception more than the rule, or has been in my 20 years of being an actor. If that’s where you start, with your first connection being with the written word, the material. And then after that, you talk to the director, you connect to the director, and then the director talks the wardrobe, and then it goes out. Everyone gets connected.

If the crew are, say holding the boom or microphone and [imitates yawning]  you’re kind of fucked. Because you want the connection to be there the whole way through. If it connects to the crew, then there’s a good chance, once an audience experiences it, it’ll connect to them. And then the rest is out of your control. I would love this film, and a few others that I’ve done, to stand the test of time, however long that time may be. But as Brendan said, it’s about connection. Initially, the purity and the honesty of connecting yourself and having curiosity and a burning desire to get beneath the written word. 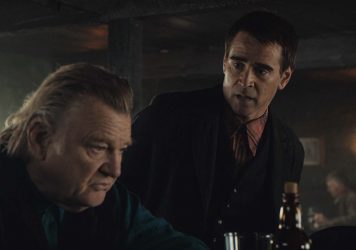 The Banshees of Inisherin

Martin McDonagh deploys his signature acerbic wit to an affectionate folktale as he reunites with Brendan Gleeson and Colin Farrell.