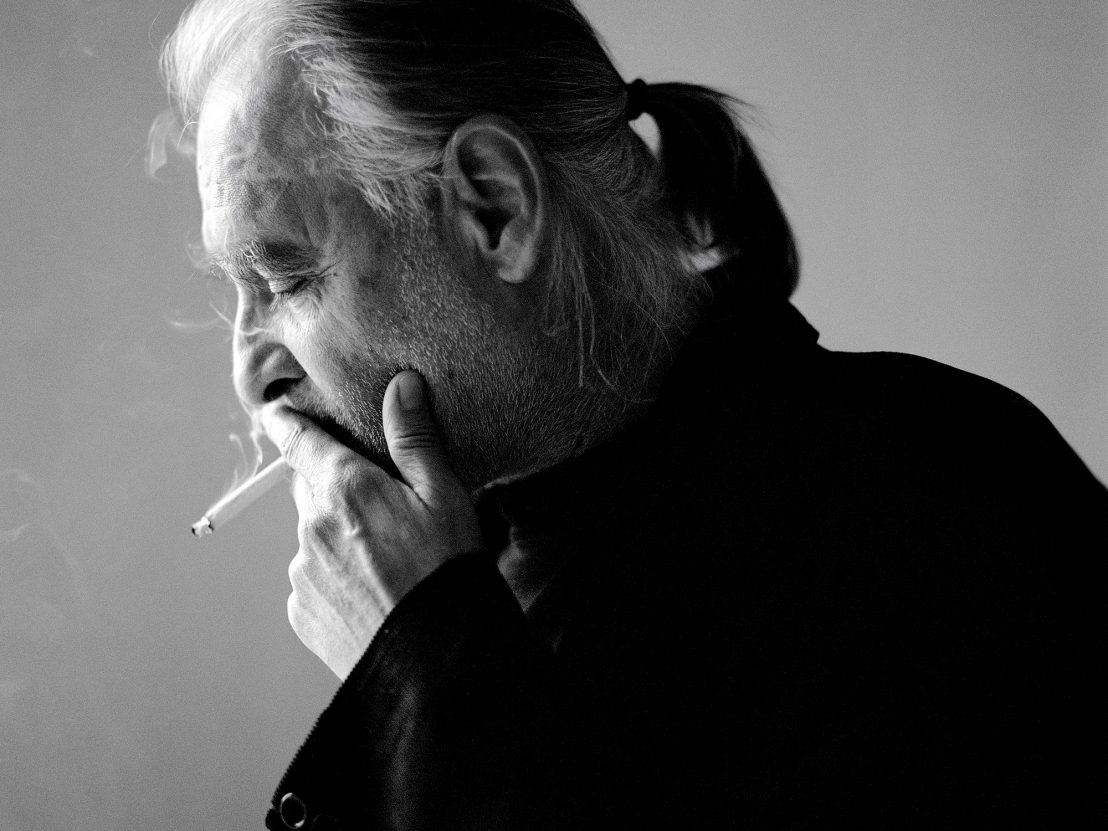 “Time is very cruel, only some films survive” – Béla Tarr on Sátántangó at 25

The legendary Hungarian auteur reflects on the making of his 1994 opus.

Béla Tarr is striding across the concourse of Berlin’s Savoy Hotel with a question forming on his lips. “Is this going to be a long interview, or a short one?” A moment’s hesitation is met by a quick answer. “Short one!” he teases, a wry twinkle in his 63-year-old eyes. He excuses himself briefly for a cigarette.

Sátántangó is a film preceded by reputation. With a runtime that nudges the seven-and-a-half hour mark, it is widely regarded as the retired Hungarian filmmaker’s most imposing artistic statement: an expansive, desolate mood piece that envelopes the viewer and ambles along at a patience-testing snail’s pace. For those who last the distance, however, it remains an indelible, searing cinematic meditation on human desperation.

To celebrate its 25th anniversary, the film has received a 4K restoration courtesy of Arbelos Films. The venerable auteur is supposed to be talking about this fact, but before he does, he settles into his chair and surveys the present. “Films now mostly look like comics. They ignore ‘time’,” he says wearily.

When asked to elaborate, Tarr refers to his signature use of the long take. “Early on, I noticed that when the camera is rolling and the whole scene is moving, everyone starts to breathe in the same rhythm: the actors, the crew members, the cinematographer, everyone. You are all ‘in’. And that is very important. It creates a special tension. It gives a special vibration. Somehow you can feel it on the screen too. You become a part of it.”

Visually speaking, Sátántangó does not veer too far from the blueprint Tarr had already established by 1994 – stylistic traits which previously appeared in 1984’s Almanac of Fall and 1988’s Damnation are merely amplified on a grander scale. The film’s narrative is perhaps its most ambitious aspect, pushing and pulling like the titular tango: six steps forward and six steps back across 12 chapters.

The film chronicles the plight of an isolated rural farming community facing obsolescence when the return of an enigmatic co-worker (played by Mihály Víg, who also provides the loping, carnivalesque score) previously thought to be dead injects fear and hope into the desperate village folk.

“I watched [the film] a month ago and, honestly, I wouldn’t change a thing,” says Tarr. “Twenty-five years is enough time to show you whether something is good or not. So many films disappear. They are like a tissue: used and then thrown out. This is the way that the market works. Time is very cruel and only some films survive.”

Tarr is interrupted by a waiter, who places a drink on the table and is duly thanked for “saving” the filmmaker’s life. He caresses the glass and gathers his thoughts as conversation turns to his professional relationship with László Krasznahorkai, the writer upon whose book Sátántangó was based. “We wanted to make Sátántangó in 1985,” recalls Tarr, “but at that time the Communist Party in Budapest stopped a lot of things. It just wasn’t possible.”

Stifled by an oppressive political climate, the pair decided to pour their collective energy into what would become Damnation. Shortly after its release Tarr, along with his editor and wife, Ágnes Hranitzky, left Hungary for West Berlin. During their time in Germany, significant social changes were developing back home. János Kádár, the communist leader who had fronted the Hungarian Socialist Workers’ Party since 1956, stepped down, ushering in a more liberal era. This proved a pivotal moment in Tarr’s career, as the director reflects. “At the 1990 Berlinale, some guy came up to me and said, ‘Hungary is changing. You can come back’. So I did, and it was only then that I could start Sátántangó.”

Tarr chose Hortobágy, part of the Great Plains of Hungary, as the backdrop for his film. The region’s sodden dirt tracks, fields and woodlands provided an austere yet striking canvass, suiting the bleak tenor of the material and ultimately emerging as a character in its own right. “One-hundred-and-twenty days of shooting with everybody in the Hungarian lowlands in the shit, physically, was really horrible,” admits Tarr. “Mentally, however, it was amazing: the time; the isolation.” 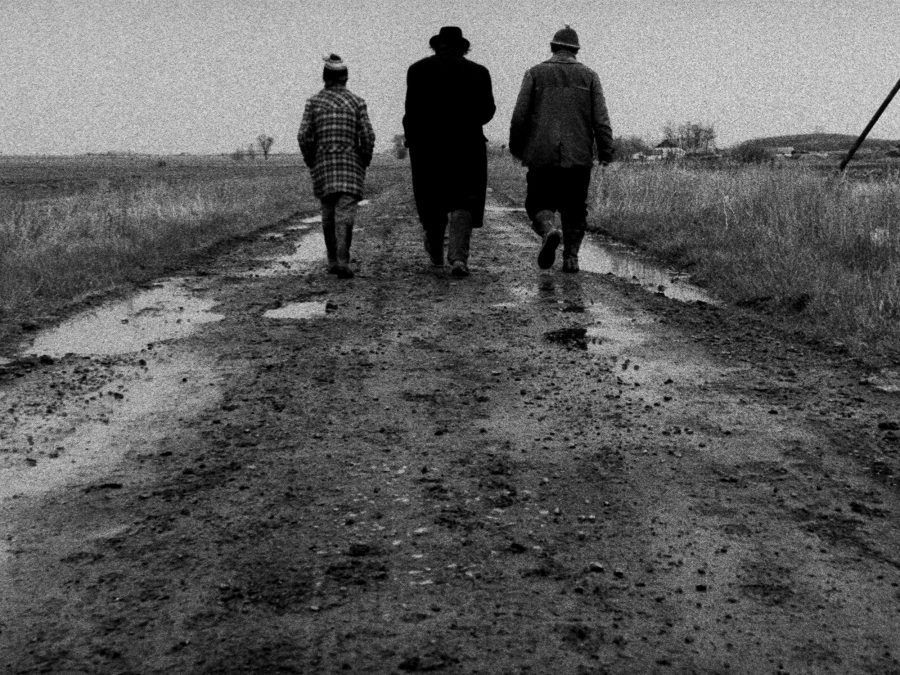 We move onto the delicate subject of Sátántangó’s notorious cat scenes, in which a neglected young girl, Estike (Erika Bók), rolls, tosses and frolics a cat around the concrete floor before poisoning it to death. This sequence remains a source of controversy to this day. When the issue of the animal’s welfare is raised, Tarr jolts upright in his chair, noticeably bristling, as though this is the first he has heard of such a concern.

“Are you crazy?” he snaps. “I had two cats at home. Can you believe that I would kill a cat?! Never! First of all, we knew the cat scene [was coming] and we knew that the cat would have to rehearse with the girl. Every day in the hotel room they would do this kind of ‘turning’ game. By the end, the cat was used to this and did not care.”

Tarr continues, “We knew that the cat has to die, so I called my vet, who was looking after my cat at home, and he came to the location. I told him, ‘You have to give her a sleeping injection. We will push the button on the camera when you give us a sign that the cat is getting dizzy’. We shot on his signal and the cat fell asleep. The whole crew stood around waiting for 25 minutes until she started to wake up. It was totally okay. The cat did not have any trouble, believe me. All the cat noises you hear are samples that we found from the sound archive on the internet, because the cat was totally silent.”

Sátántangó is in many ways the archetypal Tarr film, exuding all of the director’s hallmarks: long, languid takes, roaming tracking shots, abrasive, inclement weather and characters facing an indifferent universe as they struggle to eke out their modest lives. Responding to criticism of his work over the years, he says, “Some people say stupid things such as, ‘Your movies are sad’. I say the question is this: how did you feel when you left the cinema? If you feel stronger, I am happy. If you are weaker, then I am sorry.”

Despite this sojourn down memory lane, nostalgia is anathema to Tarr. “I am hunting new stuff,” he says. “I am a creative person and I have to create – otherwise I will die.” Since 2011’s The Turin Horse brought the curtain down on a 34-year filmmaking career, Tarr has certainly avoided laurel-resting. He has worked as both a professor and the head of programming at the film.factory film school in Sarajevo, while also curating an exhibition, ‘Til the End of the World’, a hybrid work comprising film, theatre and installation, for Amsterdam’s Eye Filmmuseum. He continues to serve as a visiting professor at several film academies and recently completed the documentary Missing People, which is due for release later this year.

He confirms, however, that his days making features are over. “We did these films together, Mihály, László, Ágnes and I. László was the writer, Mihály was the musician, Ágnes was the editor. I was just the conductor. I simply put them all together.” A humble gesture from an singular artist whose distinct style has unquestionably broadened audiences’ horizons and expanded the possibilities of cinema. 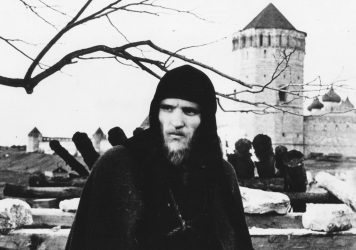