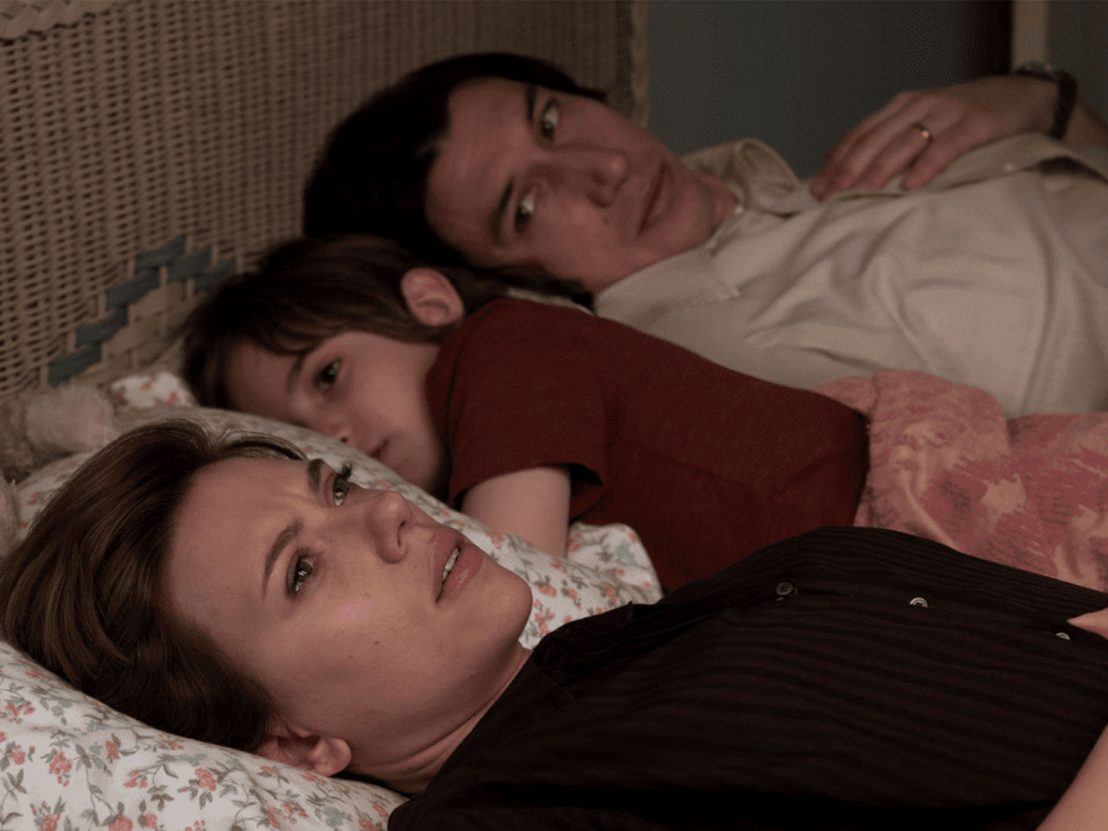 This is a bit of a strange one, but the film that came to mind while watching Noah Baumbach’s punishingly incisive dissection of a messy break-up and divorce was not Ingmar Bergman’s Scenes from a Marriage – which is even name-checked as a framed magazine article on the wall of a New York apartment – but in fact Steven Spielberg’s Jurassic Park. Yes, there is a lot of yelling, but the real reason for the connection is that it is a film about how lawyers are sub-human scum and should, were it permissible in polite society, be fed to a long-extinct lizard monster while at their most humiliatingly vulnerable.

Some context: Scarlett Johansson is Nicole, a one-time teen movie icon who decamped to the east and shacked up with avant garde theatre director Charlie, played by Adam Driver. She found a sense of creative rejuvenation as the lead actor in his off-broadway doodles, while he was able to build a name for himself as a talent so white hot that even the cover of Time Out New York couldn’t say no. They became a couple and had a boy named Henry. They enjoyed one another’s quirks and built what, on the surface, appeared like a cosily symbiotic union centred on an undying love for their son.

Baumbach opens his film with the pair listing the small, silly things that each partner loves about the other. Even though the details picked up on suggest a level of perception that transcends a romantic fling gone wrong, it soon becomes obvious that there is trouble in paradise. His obsession with his job has stifled her ambitions, and central to everything is her desire to move to Los Angeles – where they met, where they were married, where her family live and where their son was born. Plus, she’s been offered a part in a TV pilot and he is unable to comprehend why she would ever countenance such an artistically moribund career move. It’s actually symbolic of some deeper need for freedom, but he can’t see that.

It’s a story driven by fine details and social minutiae, a lot of it looking like it was gleaned from memory or anecdote: there’s certainly a sense that the writer-director has at least some first hand experience with the rocky terrain of divorce. There’s no scurrilous interest to be found in attempting to pick apart who the characters are based on, as Baumbach will always have the prerogative of fiction to cover his tracks.

And yet, it may explain why the film comes across as a withering critique of male narcissism and psychological torment (Baumbach staples), and if Charlie is indeed a manqué for for the director, this really is a 135 minute apologia for years of ambient neglect and shortsightedness. But tonally, the film is mostly upbeat: Adam Driver makes for the nicest, friendliest, most lovable gaslighter in the history of cinema.

Even though the scales of empathy are tipped towards Nicole, there is a common enemy, and that’s the lawyers. It’s an entertaining if obvious conceit, as Baumbach portrays them as the conduit for a malevolent evil – it’s a job that involves looking for the worst in good people. Nicole retains the services of Nora (Laura Dern), a glamorous LA legal assassin who goes for the jugular and then just keeps on stabbing. In one sublime monologue, she even suggests that she would even have a solid line of argument if it came to Mary suing God for parental rights to Jesus.

Charlie, meanwhile, hires Alan Alda’s mom ’n’ pop ex-entertainment lawyer, whose toothy grins, tortuous jokes and passive battle technique end up getting him nowhere. So in comes Ray Liotta, who is willing to play Nora at her own game, and it’s knives out all the way. Even though the pair claimed to want an amicable break, Charlie is unable to accept that his demands for Henry to return to New York are not acceptable to Nicole, and so matters almost naturally drift towards ugliness. Every moment the pair spend with each other becomes another chance to land a below-the-belt punch in court.

Much of the first half of the film comes across as rather bitter, even as the regular inclusion of goofy sight gags and the odd comic set bring a sense of levity to its heavy themes. The writing is suitably dense and literate, though Baumbach really cherishes the characters as individuals – it never feels as if Nicole and Charlie are avatars for his own poetic musings on the differences between love and fidelity. Marriage Story is at its best when it just the two leads talking in a room – and what with them being in the process of splitting up, that’s less often that could be hoped for.

But these are mere niggles, and all is forgiven and forgotten when you’re in the company of one of the greatest living comic actors – all hail Julie Hagerty, utterly sublime as Nicole’s ditzy pant-suited wine mom.