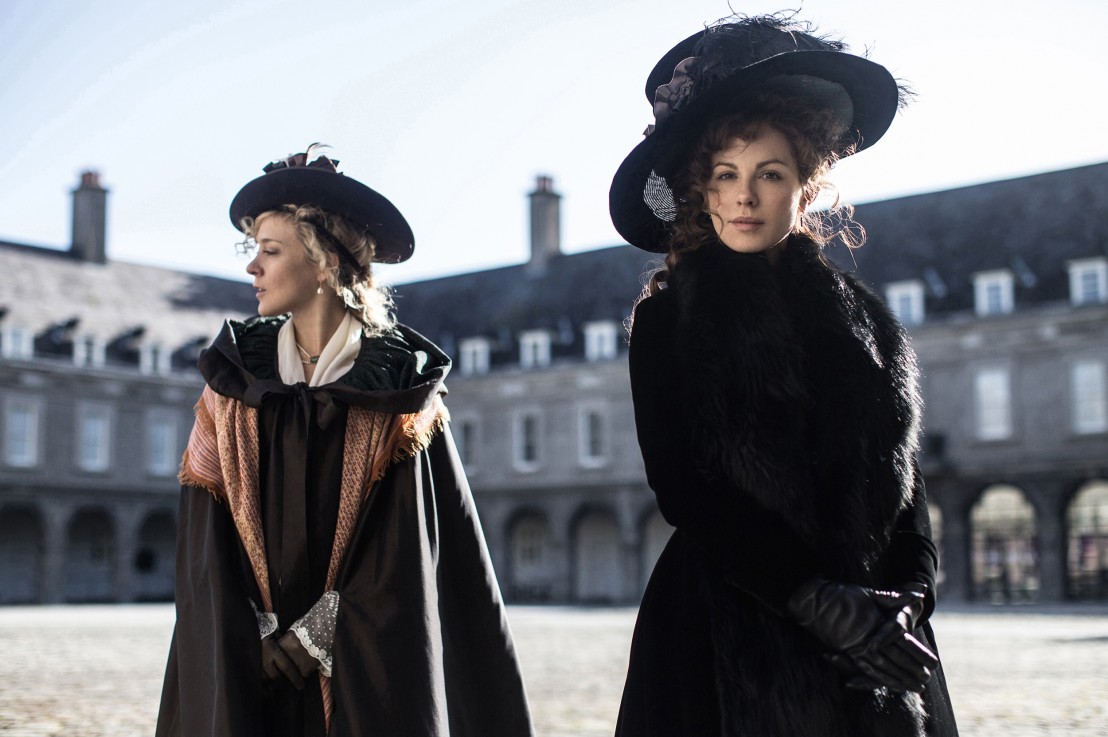 Whit Stillman is a director fascinated by the idea of people gladly displaced from their own time: foppish debutantes abide by romantic era courting rituals in nineties Manhattan in Metropolitan; a good old limbo contest trumps modern jazz in Barcelona; and lovers of disco music band together while boxes of wax platters are torched at baseball games in The Last Days of Disco.

With his ebullient and scaldingly droll latest – a superlative screwball adaptation of Jane Austen’s novella ‘Lady Susan’ – Stillman may have finally located an ensemble of characters who exist in their own time. The problem, though is that quite a few of them want out, desperate to embrace whatever progressive notions the future holds. In fact, while his past work has often offered a celebration of nostalgia and even kitsch, this new film is his first to reject such fripperies in favour of hard, unsentimental reason. And it’s all the more hilarious for it.

Perhaps the closest thing imaginable to a modern day Ernst Lubitsch film, Love & Friendship sees puffed-up gentry adorned in lace-trimmed garments (colour-coded as to the capacity of their imagination) trying to get their prissy minds around the concept of modern romance. Or in some cases, doing their best to keep antiquated traditions of courtship burning bright.

Kate Beckinsale astonishes as what Rose from Damsels in Distress might have referred to as a “playboy” or “operator” type, a maven of social manipulation named Lady Susan Vernon who is introduced to us in a top-to-toe black combo replete with ostentatious feathered plumes. To call her a chiseller would be over-stating it; she’s just ruthlessly independent and out to preserve her own tiny island of high-minded gratification, the only other soul allowed to visit being Chloë Sevigny’s displaced American society dame Alicia Johnson. Horse-drawn carriages and discreet, covered byways are the venues of their plotting, as Mr Johnson (Stephen Fry) has prohibited his spouse from fraternising with Lady Susan due to her unsavoury reputation.

Recently widowed, Susan takes on the task of coupling up her bashful daughter Frederica (Morfydd Clark) with any wealthy loon who’s happy to take the bait. Opting to use the grand country stack of Churchill (not Church Hill) as her figurative chess board serves to complicate matters, as all of her scheming is being witnessed firsthand and interpreted (sometimes correctly, often not) by coldly sympathetic sister-in-law Catherine Vernon (Emma Greenwell) and her lantern-jawed, non-oafish brother, Reginald DeCourcy (Xavier Samuel), himself possibly harbouring designs on the sphinx-like Susan.

While it all remains exorbitantly enjoyable on a superficial level (just hearing these actors twist their tongues around the dialogue is a delight in itself), there’s more to the film than even those with their spyglass pressed to the screen might see. While its roots are sunk deeply in the traditions of chamber comedy, the film also depicts politics and business as games of verbal double-dealing which require the player to expunge all traces of physical and emotional weakness. While Beckinsale might instantly recall the hardened, self-assured likes of a Bette Davis, a Katharine Hepburn or a Barbara Stanwyck, she also brings to mind Ian Richardson’s Machiavellian minister Francis Urquhart in TV serial House of Cards.

The film is possibly, probably Stillman’s most commercially viable to date, though that’s more to do with the vapours of Downton-mania that still hang in the air than any obvious attempt to dilute his genteel stylings. His work has often favoured building up characters and wrapping a loose-weave narrative around their eccentric travails, though Love & Friendship is plotted to intricate perfection, with staging, choreography, timing and geography all paramount to the subtle mechanics of the comedy.

On a technical level, it’s up there with the likes of Eric Rohmer. The illusion of frivolity, where levity and absent-mindedness help to flesh out delicate philosophical intimations, plus the comic discrepancy between what a character says and what he/she is really clearly thinking, are all cap-doffs to the late French master. And praise does not come higher than that.