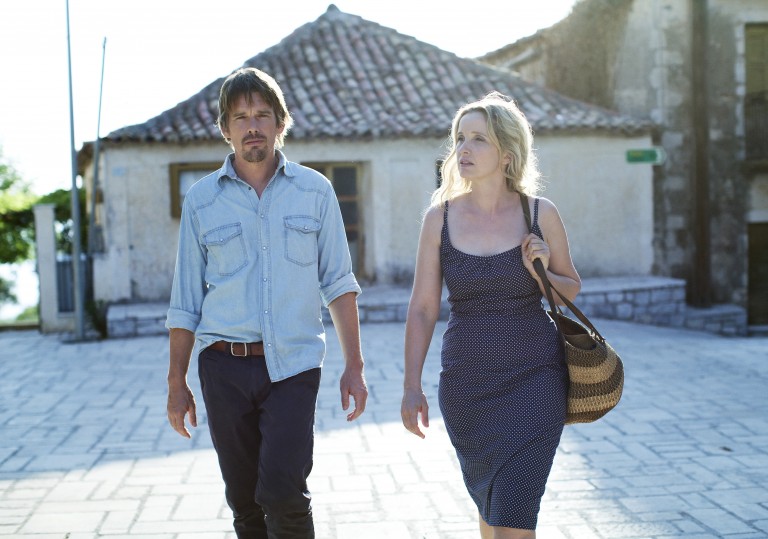 We love Linklater at any time of day, but his Before films are extra special.

Predictably, it’s just as great as the first two.

Perhaps lacking that cinematic sucker punch, but still an astonishing achievement. Part four? Why the hell not...

Monitoring the real-time adventures of ultra-loquacious lovebirds Celine (Julie Delpy) and Jesse (Ethan Hawke) can sometimes be an unnerving business. So intimate are we with their combustible on/off romance on the back of 1995’s Before Sunrise and 2004’s Before Sunset, that revisiting them now as a married couple can only mean one thing: trouble’s a brewin’.

Without spoiling any of the film’s whimsically articulate machinations, the minute-by-minute process of watching this third instalment – especially if you’re a fan of the first two – makes for knife-edge viewing. Celine even at one point fears that Jesse may have some life-threatening illness after he ominously admits he’s got something he wants to tell her. For a moment, it’s devastating.

The pair are spending the summer season idling on the Peloponnese peninsula with their two tousle-haired (though surprisingly mute) twin daughters. The ancient ruins that litter the landscape act as a constant reminder of the passing of time and that the unmediated passions of youth must now make way for family obligations and responsibilities. Richard Linklater demarcates the emotions via the light in the sky: with the sun comes humour and sarcasm and sex talk; with the moon comes bitterness and frustration. And more sex talk.

As much as Before Midnight impresses as a kind of caustic bourgeois soap opera, it’s the cadence, inflection, intonation, rhythm and tone of words that are the film’s foremost pleasures. Delpy and Hawke have not merely learned their lines and barked them at one another, but have developed an elaborate catalogue of gesticulations and voices that blur the line between what is being said and what is being meant. Even though one suspects the characters of Jesse and Celine are just simple extensions of Hawke and Delpy, this feeling is never enough to shatter the illusion that the people we’re spending time with are impossibly fragile and sensitive and that their relationship runs deeper than the fiction of the film’s world.

What’s also great about Before Midnight is that it never strays into the academic. Linklater, Delpy and Hawke have written the film in such a fastidiously loose way as to make the challenge of attaching a single umbrella meaning to all the walk-and-talk entirely futile.

This isn’t a cold study in behavioural dynamics, but a warm, meandering collection of semantic odds and ends. It’s not about the difficulty of dealing with big problems, it’s about the ever-widening chasm between romance and mutual compatibility. It also deals with the depressing idea that it’s only when two people are truly in love that they are able to offload their most jagged barbs.

If there’s a problem with the film, it’s that it ends up only being about what it’s about. While we can happily read into the myriad nuances of Celine and Jesse’s interactions while seeing our own relationships refracted in their gloriously circuitous bicker sessions, the film lacks the playful cinematic dimension of Abbas Kiarostami’s Certified Copy or the sublime miracles of Roberto Rossellini’s Journey To Italy (from which this lovingly cribs).

Politically, though, it’s on far sturdier ground, containing as it does perhaps the most perceptive and trenchant discussion of how childbirth can prevent women from attaining the same professional satisfaction as men. Indeed, with this film, Linklater proves himself to be one of the greatest living sculpters of screen dialogue.

We love Linklater at any time of day, but his Before films are extra special.

Predictably, it’s just as great as the first two.

Perhaps lacking that cinematic sucker punch, but still an astonishing achievement. Part four? Why the hell not...