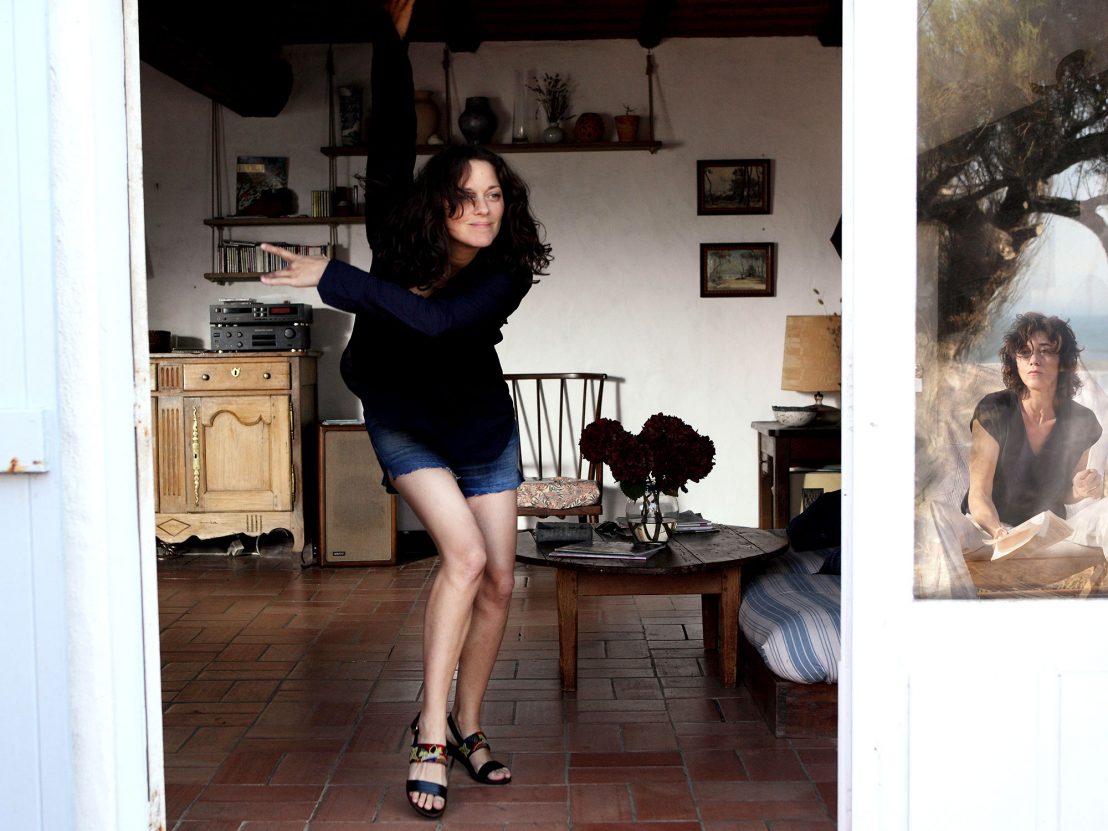 The very simple idea that people lead more complicated lives that we could ever hope to fathom is played out over a twisting and impulsive duel narrative in Arnaud Desplechin’s entertainingly scattershot and impetuous Cannes opener, Ismael’s Ghosts. Charlotte Gainsbourg, playing an ethereal waif and astrophysicist named Sylvia, claims she wants to remove the mask of her shabby, charming film director lover, Ismael (Mathieu Amalric). But when she begins to tug at the edges, she sees more than expected – a tumult of wrenching experience and a reality that now haunts his dreams.

19 years prior to their meeting, Ismael was married to Carlotta (Marion Cotillard), who one day just hopped on to a train and started a new life. Unable to fathom the distress she caused him, she returns, a little cracked and crazy in a bid restart her life with him and nudge the doting and very accommodating Sylvia out of the frame. This is a film where characters lives are are guided by their heart. They feel their way through situations and understand that there is no way of predicting cause or effect. Desplechin writes the film in a similar manner, flitting between timelines, subjects and perspectives, wringing out the emotion in front of us with little care for exactly where it falls.

It sounds pretentious to talk in these terms but Desplechin’s filmmaking feels like it draws its energy from poetry and music as much as it does literature and film history. This winding, indulgent film has involved verses and then, suddenly, a soaring emotional chorus, and then there’s a noodly bridge section and then an off-kilter harmony segueing in from the secondary plot-strand. There’s a moment where two characters wax analytical about Jackson Pollock’s painting, Lavender Mist, specifically the biographical details hidden within the unformed pastel blotches. Maybe this is the director giving himself an out, assuring that there is conventional form to this wild tale, you just have to search for it.

But while he dances around, filling the mouths of is characters with the most exquisite romantic utterances, from nowhere he’ll pull just an emotional molotov from his camo trench-coat and hurl it towards the screen. Carlotta cheekily bops to Bob Dylan as way to inveigle her way back into the life she was so quick to discard, while Sylvia, looking on, reacts by not knowing whether to sob or chuckle. The film is at its best when the characters interact in close quarters. Exposition sequences and the stretches where a marble-gathering time out is taken slow things down and drain the visual energy.

The film-within-a-film element is a bizarre John Le Carré spy pastiche starring Louis Garrel and Alba Rohrwacher. It’s hard to see where the two stories bisect beyond being a realisation of Ismael’s boyhood fantasy, or maybe the invented life he would’ve lead had he never met Carlotta. There are hat tips to a lot of Alfred Hitchcock films such as Vertigo, The Lady Vanishes and The Man Who Wasn’t There, but they seldom betray more depth than just being arch cinephile reference points.

Yes, it’s a mess, an occasionally glorious one all told, and the last thing you’d ever want to happen is for Desplechin to settle down, mothball his fixations (diplomacy, rap music, iris shots, the northern French city of Roubaix) and make something for the kids in the peanut gallery. Underneath it all is a mournful lament to the pain of ageing and the feeling that, even while you’re still breathing, you can chose to stop living and loving. Maybe this is the end of a cycle for this idiosyncratic maestro? Can’t wait to see what he does next, even if he does feel like taking one more bite of the cherry.