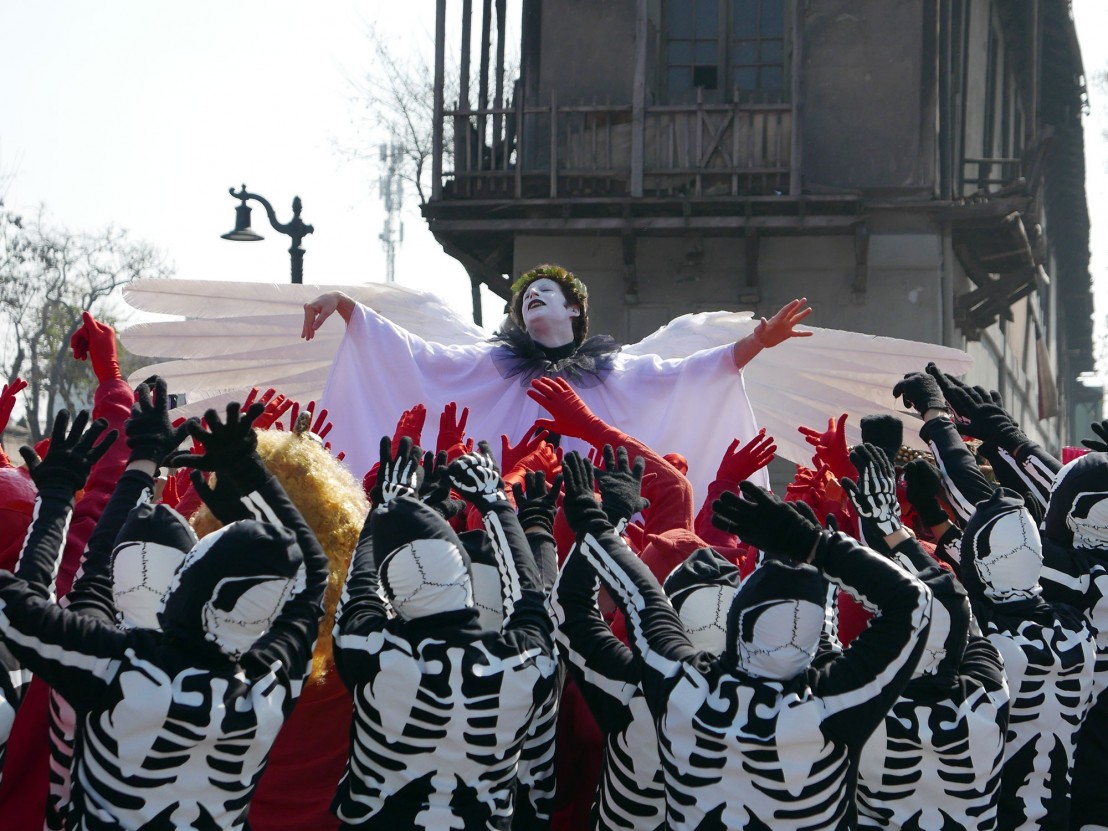 A poet is born in this autobiographical epic from Chilean maverick, Alejandro Jodorowsky.

Ironically, this new film by Chilean hippie-freak Alejandro Jodorowsky feels much less ‘endless’ than his previous feature, The Dance of Reality – a film that dragged something rotten. Even though this one is near identical in its carnivalesque aesthetic, literary structure, its presentation of ideas and its abiding fondness for the gaudy grotesque and corporeal excess, it’s a far less bitter pill to swallow. It means that we’re afforded a rare sighting in a Jodorowsky movie: spare, naked emotion, simply and movingly stated.

Picking up almost exactly where Dance left off, we shift over from the father to the son, as little ‘Alejandrito’ defies the violent insistence that he should seek social value by becoming a doctor, and follows his waking dream of writing poetry. The decision he has to make is clear: it’s either poetry or parents. And so he flees for an artistic commune and the film then catalogues the wild experiences he goes on to quickly accrue. The director makes canny use of a tight budget, building a city from giant 2D cut-outs which is populated by black-clad scene changers who lurk just off stage.

It’s maybe worth getting the film’s virulent seam of homophobia out of the way at the top, as it really does stick in the craw. Jodorowsky’s bawdy, anything goes attitude on occasion comes across as a little too unreconstructed, and his attempts to depict an era when homosexuality was a dirty word sadly comes across as a belief he continues to hold. Referred to exclusively as “faggots” (per the film’s English subtitles), these characters are depicted as alternately fay, effete and melodramatic, or as barbaric rapists, and Jodorowsky’s youthful realisation that he isn’t gay is framed as an entirely affirmative epiphany.

Beyond that, this is a surprisingly conventional piece of film autobiography, with Jodorowsky’s own son, Adan, stepping into the oversized clown shoes of the director in the years leading up to Carlos Ibáñez del Campo’s second premiership of 1952. It’s a fascinating film about the impossibility of learning how to be creative. It states that hard experience is usually all you need to get the juices flowing. Finding and losing love with his first muse, and later receiving affirmations from the members of his clique, is what enables him to progress through life. There’s the standard issue weirdness involving midget sex and mischievous mockery of Chilean public heroes (most notably Pablo Neruda), but it’s a little more tame and open than usual.

As with the previous film, the strongest moments are when the real Alejandro Jodorowsky (wearing a purple suit) drops into the action and breathlessly comments on proceedings, placing a hand on his manqué son’s shoulder and whispering him advice from the future. Though it maintains its disruptive bent throughout, there’s a sincerity and passion which shine through strongest during the film’s closing passages, where the director essentially reveals that this film is made as gift for the parents he never really knew. It’s perhaps the closest the director has come to sentimentalism, but then you remember the vomit-filled top hats and menstruation blood rituals, and all switches back to normal.