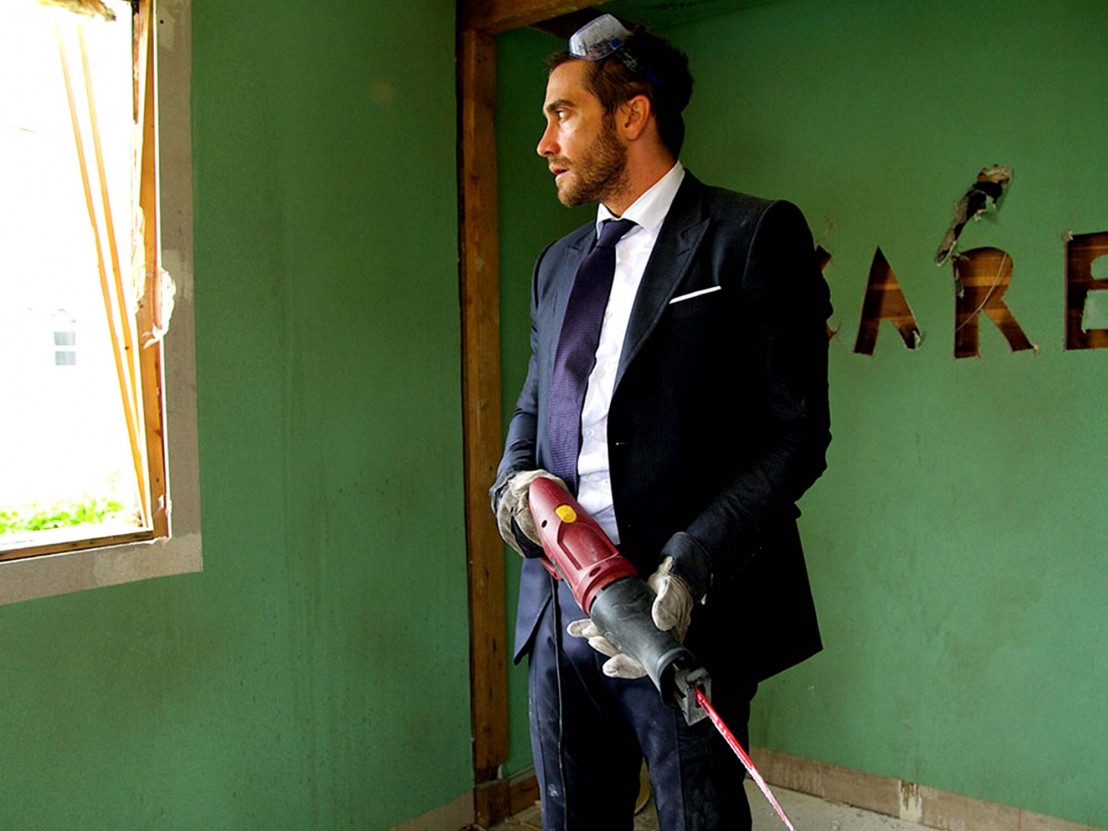 Jake Gyllenhaal trades his shark-skin suit and a strict regime of below-the-chin hair removal for tan Caterpillars, cargo pants and a sledge-hammer in Jean-Marc Vallée’s delightfully (pointedly) ramshackle examination of grief’s crooked shadow, Demolition. As bad as this sounds, think Peter Weir’s Fearless meets a PG-13 Fight Club (with Falling Down trimmings), and aimed at people who attend poetry readings – in a good way!

Following the sudden death of his wife (Heather Lind) in a traffic accident (at which he was present but left mysteriously unscarred), Gyllenhaal’s steely hedge fund jackal Davis Mitchell takes his good sweet time to locate the correct outlet to express exactly what he’s feeling. His father-in-law/boss (Chris Cooper) does not take kindly to this wacky transition, so he’s allowed some time off for self-repair.

On the back of an inadequate vending experience at the intensive care unit where his wife passed, Davis strikes up a strange, confessional postal correspondence with the cannabis-smoking customer service manager of the company, Karen (Naomi Watts), and embeds himself within her family while he sets out on a course of destruction therapy. His days are duly consumed with smashing houses and dismantling appliances. He also offers some top cool tips to Karen’s gender-bending, potty-mouthed son.

Demolition works as a fine companion piece to Vallée’s underrated Wild, another study of how eccentric, immovable personal goals can be employed as an apparatus to transcend depression or self-immolation. Instead of wallowing in histrionic emotion, the film employs levity and humour to disarming effect. Yes, this is essentially the story of “what’s going to bother Jake’s bone-dry tear ducts in the final scene?” but that “journey” is satisfyingly devoid of simplistic life lessons and Little Book of Grief aphorisms. There’s a messiness to the film which coalesces with its characters responses to surroundings and people.

Gyllenhaal – not the most earnestly emotional of actors – has found a perfect role in dead-eyed Davis Mitchell, a hollow shell of degraded humanity who embraces his inner punk while hiding behind a championship-level poker face. Though his newly found truth-teller schtick garners a decent quota of laughs, it masks the deeper issue about what he actual felt about his wife, and whether her death is at all problematic for him. It unlocks him from the pained rigours of his desk job, but the interesting question the film asks is whether death can evoke a skewed sense of happiness and freedom, though still within a framework of empathy.

The film’s loose structure allows Vallée to make it feel like a narrative patchwork, with tiny asides sewn in between the larger blocks of narrative. If the film has a fault it’s that it’s far too glibly judgmental about 1 per centers, and while that might work for some as satisfying, class-baiting grist to the mill, it’s so open and careful with its characterisations elsewhere, that it means that that Davis doesn’t really have anyone substantial to bounce off of.