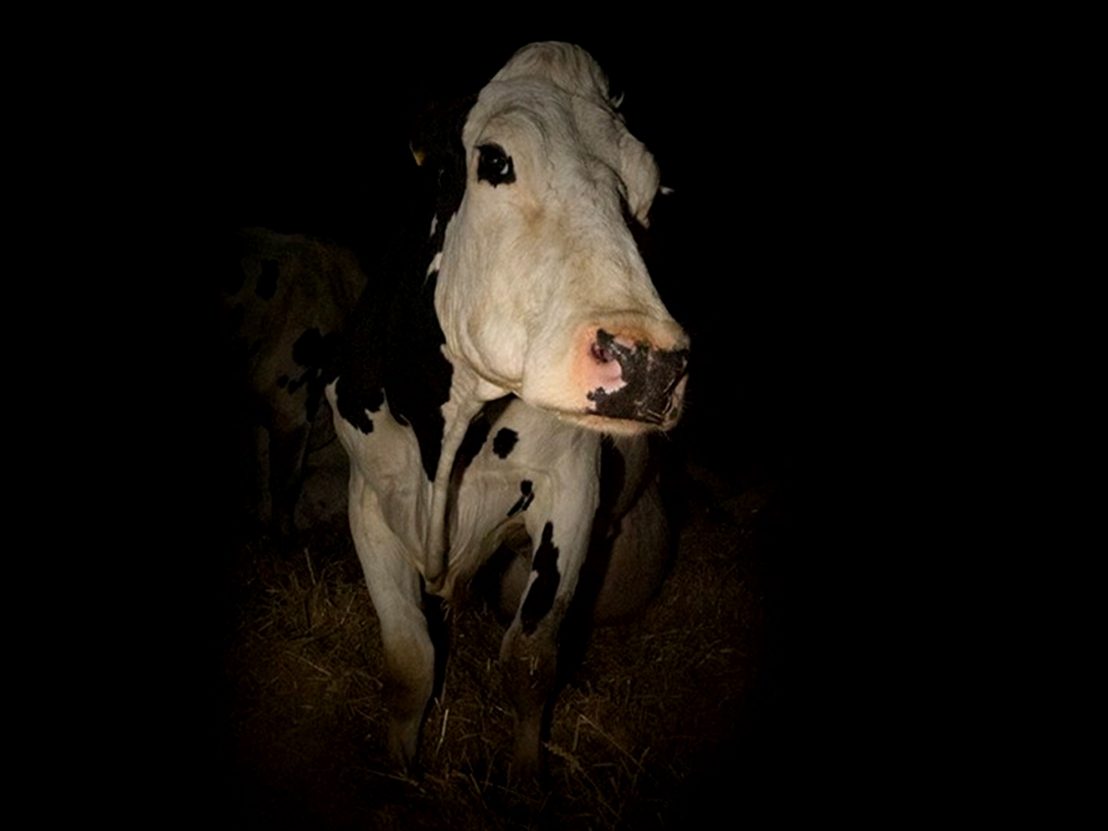 “Thank you for giving your time to our cow,” said Andrea Arnold introducing the Cannes premiere of her documentary, Cow. In cooperation with the dairy and cattle people at a British farm, the director of such bruising social realist films as Red Road, Fish Tank and (to a lesser extent) American Honey has switched her focus to the humble bovine for a feature-length chronicle that presents without comment the conditions in which dairy cows live out their days.

Although there is a large ensemble cast, one cow – Luma – has been singled out as the protagonist. She gives birth to a beautiful baby calf, aided by birthing chains attached to the newborn’s hooves and heaved out by the farmers. The camera zooms in on Luma’s large pink tongue licking yellow birthing fluid off her calf. The intensity of these shots frame an animal that is ubiquitous-to-the-point-of-invisibility in a new light. Handheld close-ups on demure brown eyes, long white eyelashes, heaving udders and hefty flanks drum up a sense of awe and respect for these docile creatures.

Cows are centred in every shot, with human presence initially reduced to sights and sounds that leak into the frame when milking, feeding, herding or otherwise going about their cow-based business. The voices are affable, the hands practised and brisk. One feels that maybe this isn’t going to be a call-to-action film that shines a light on the horrors of the dairy industry. Perhaps instead a cinematic love letter to a cow?

The rapture of the focus on Luma and her pals in the cow barn leads to emotional investment and the question: are they happy? Every aspect of their daily life is governed by humans: when they eat; how they sleep; when they have time to run free in a field; when a bull is brought into mate; when they give birth; when a vet has a hand inside them. Keeping the camera so closely trained on these procedures invites empathy when a cow flails, when having its horns cauterised or stands unnervingly still in the metal pens where they are kept flank-to-flank.

Regrettably, to the untrained eye, one cow looks very much like another and there are times when the ensemble cast overwhelmed the fragile sense of a narrative afforded by cleaving to Luma and her calf. There were stretches where I feverishly wished that this was an hour long documentary about a cow, rather than a 90 minute one. To her credit, Arnold finds humour through editing, cutting from a shot of a bull mounting his mate – pink organ unsheathed – to fireworks exploding in the sky.

A mild sense of dread mounts as time ticks by. While there is a lack of direct editorialising, and the farmers are shown in an amiable light, the sheer fact of the cows’ captivity, living to serve one specific purpose, transmutes an anxiety over what will become of them. Strangely, for a film with a logline that seems to be low on dramatic stakes, Cow feels like an Andrea Arnold picture. There is a visceral appreciation for her helpless subjects that flows out of the film like spilled milk.