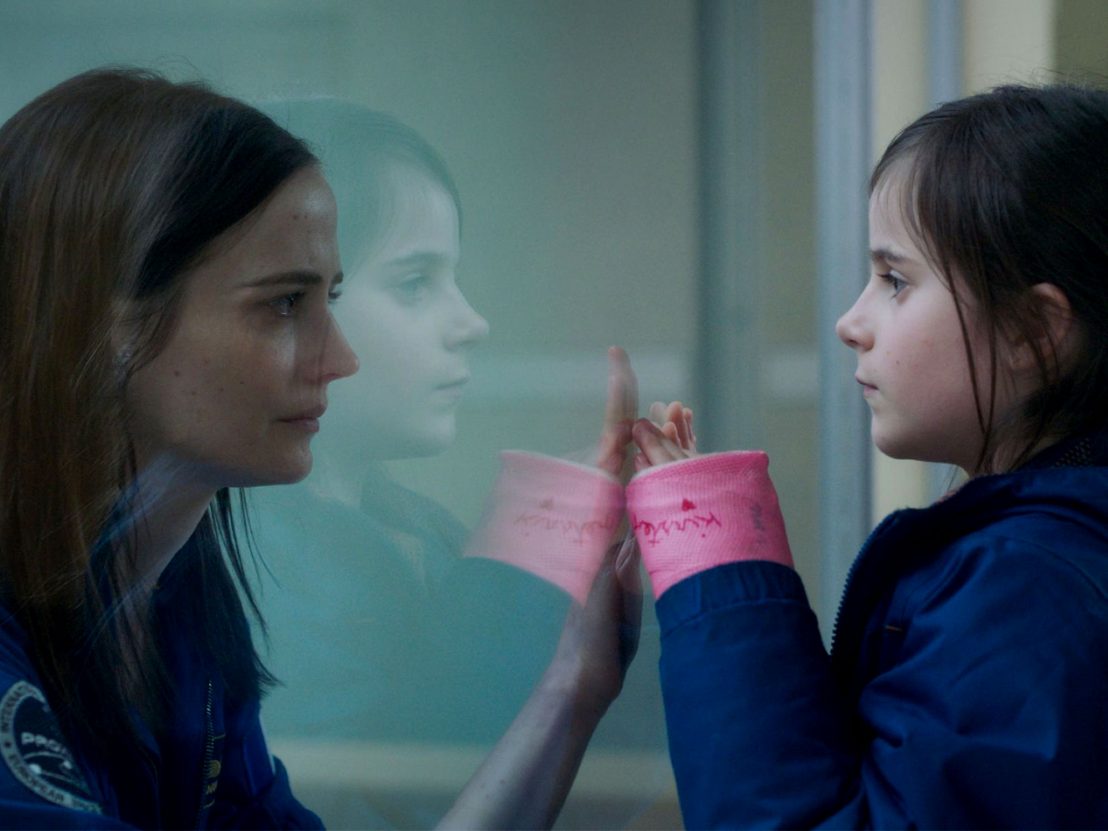 In the end credits for Proxima the names and images of mothers and their children are shown, family portraits where each of these women are kitted out in full astronaut gear. These brave women are the real-life individuals that Alice Winocour’s film honours. Through exploring Sarah Loreau’s (Eva Green) aspiration of leaving Earth, while battling her role and responsibility as a mother to her young daughter, Proxima unites the roles of mother and astronaut; both are synonymous with venturing into the unknown.

While pregnant astronauts are prohibited to fly in space, many individuals who have had children have ventured beyond Earth’s orbit. Anna Fisher was the first person to travel into space as a mother, launching and returning the Space Shuttle Discovery in 1984. Though other women have come before Eva Green’s Sarah in Proxima, no amount of preparation can ever fully equip someone for leaving the Earth or raising a human. Both are intrepid adventures tackled in different ways and with no set instruction manual.

Exploring uncharted territory is what intrinsically connects the journey of motherhood and astronautical exploration. Climaxing with daunting prospects of childbirth and liftoff; two moments of immense pressure, hopefully then followed by a miraculous celebration of human life and achievement.

Both these feats of human engineering, one within the body creating a new life and the other a triumph of technological power, act as efforts in the preservation of humanity. The miracle of life is celebrated as a child is born and as a space shuttle takes off, both motherhood and the role of an astronaut ask for a dedication from the body that is ultimately for the progression of humankind.

“Parents often remark on how their worldview has changed since having a child, similarly to how astronauts’ view of the world is forever changed when they see Earth from a distance.”

To venture beyond the boundaries of Earth is to put your life in the hands of others and hope they’ve made the right calculations, in the same way a child innately relies on their caregiver to survive. Sarah’s gravity is the love she has for her daughter, which anchors her to Earth and repeatedly pulls her back into her child’s orbit. Choosing between mother and astronaut is not an option because these roles are not interchangeable, they are one and the same.

Parents often remark on how their worldview changes after having a child, similarly to how the outlook of an astronaut is forever changed when they see Earth from space. Both eventualities result in an experience of shifting perspectives on morality, humanity and reliance.

This blurring of mother and astronaut is also seen in Proxima visually. Astronaut training requires Sarah to undergo tests and simulations to prove her readiness for space travel. In doing so, her body is put under intense strain as her willpower to withstand inhuman experiences is assessed. In replicating zero gravity, the astronauts have to perform tasks underwater with restricted movement; the moment replicates a womb-like experience of floating in darkness, disorientated. In the process of experiencing outer-space, Sarah finds herself returning to a place innately human: the womb.

Other reincarnations of replicating outer-space show Sarah connected to the space shuttle via a tether that appears like an umbilical cord. These visuals further the thematic links of dependency and connection that tie into the comparison between space exploration and motherhood. With a vehement determination, Sarah embarks on a journey of emotionally testing motherhood and an astronomical adventure in a way that is innately caring, doing everything she can to be close to her daughter while the space between them grows.

Perhaps the most adventurous trip in the experience of being human, comparable to leaving Earth for space, is the journey of raising another life.