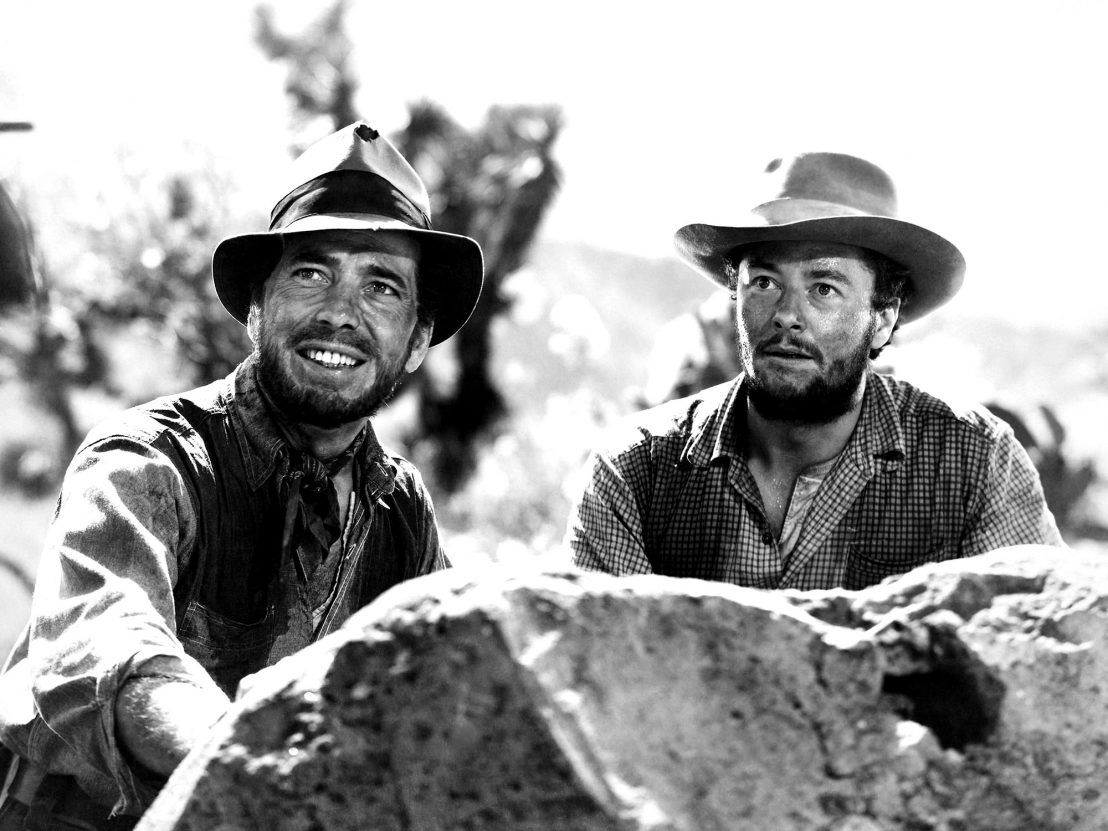 Upon leaving one of his favoured New York haunts, Humphrey Bogart remarked to critic Archer Winston, “Wait till you see me in my next picture, I play the worst shit you ever saw.” That may not sound like a ringing endorsement for any film, but Bogart wasn’t talking about any old picture. The Treasure of the Sierra Madre is a hot, sweaty, pressure-cooker tale of temptation and greed that is today rightly regarded as one of the great American classics from Hollywood’s golden age. It is to filmmakers what Pulp Fiction is to film students, and 70 years on, its legacy and influence are plain to see. Not that it was clear from the outset.

After reading the eponymous novel by B Traven – an author who commanded a Pynchon-esque aura of mystery – Huston decided it was to be his follow-up to The Maltese Falcon. Yet the road to making the film was rocky one. Huston’s dark script was twice rejected by Warner Bros, who wanted something lighter. Then came an even greater obstacle as Huston joined America’s fight in World War Two, leaving the project stranded in development hell. Huston’s prolonged absence led to numerous script edits and other directors and stars being attached, but producer Henry Blanke managed to hold the fort for Huston, even (allegedly) commissioning bad rewrites to further stall production.

By the time Huston returned, Bogart was now a huge star. With the script finalised and Tim Holt and Walter Huston (John’s father) cast in the other major roles, everything was set. But tensions between Huston and the studio ran high as the director insisted on shooting on location in Mexico. Up to that point the vast majority of Hollywood productions were filmed on backlots, but the tide was beginning to change thanks to the likes of Orson Welles, who in 1947 shot The Lady From Shanghai at various locations across California and Mexico.

Huston won out, yet while filming outside of the US lent the film a rough and ready atmosphere, it didn’t make for a smooth production. With the studio unable to exert its grip across the border, and the dailies not making for happy viewing for studio head Jack Warner, Huston and co were eventually ordered to return to the Warners backlot where the film was completed – 29 days over schedule and several million dollars over budget.

The finished product was not what Jack had originally imagined, but unlike The Lady from Shanghai, which suffered from heavy studio edits, Warner conceded, recognising the films greatness. Privately he predicated it would be a flop – and it was. Unsure of how to market the film, the studio settled on playing up the western and adventure elements, but it ultimately failed to find a wide enough audience and recouped only a fraction of its bloated budget. The Academy were fully behind it, however, twice recognising Huston at the 1949 Oscars and awarding Huston Sr the supporting actor gong. Hollywood’s first father and son winning combination.

No such reward for Bogart though, whose Fred C Dobbs represented the antithesis of his screen persona – a character perhaps too daring for its time but now widely recognised as one of the actor’s finest achievements. Bogart relished the opportunity to play a down and dirty antihero, gradually growing more filthy and unkempt so that by film’s end there doesn’t appear to be any inch of him that isn’t covered in dirt or sweat. As he descends into madness, gradually consumed by paranoia and an insatiable lust for gold, his hair becomes a tangled mess and his face rodent-like in appearance; gaunt and hollow-eyed with a demented toothy grin. Bogart’s total commitment in creating this truly despicable character alienated his fanbase, who had come to see ‘Bogie’ not the monstrous Dobbs.

The Treasure of the Sierra Madre is a technical tour de force, too. Huston keeps his camera fairly restrained, complementing the action while slowly and subtly building a sense of unease. To begin with the film’s visual style is relatively uncomplicated, with Huston employing wide lenses and bright daylight, but as events progress he adds in more night scenes. This is when the film is at its darkest, figuratively and literally. Fire provides the main light source and shadows constrict the frame as the story takes on a noir like quality. The background becomes blurred and the edges of the frame become increasingly warped. Huston fills the narrow 1:33:1 (4:3) frame with close-ups, showing characters’ faces glistening with sweat, their eyes glowing as their mental states unravel.

Stanley Kubrick named The Treasure of the Sierra Madre among his favourite films, its dramatic ending clearly mirrored in his 1956 film The Killing where Sterling Hayden is blown away into the night like gold dust. George Lucas and Steven Spielberg also took inspiration, borrowing Dobbs’ fedora and unshaven look for Indiana Jones and channelling Ted McCord’s noir-tinged cinematography. Paul Thomas Anderson watched it several times while writing There Will Be Blood, another atmospheric drama about the corrupting power of gold (or rather liquid gold). The opening shot of a mountain range instantly evokes Huston’s film, suggesting that Daniel Plainview is about to undertake a similar journey. Seventy years on from its original release, The Treasure of the Sierra still manages to slowly worm its way under the skin, creating a feeling of achromatic anxiety from its very first frame.