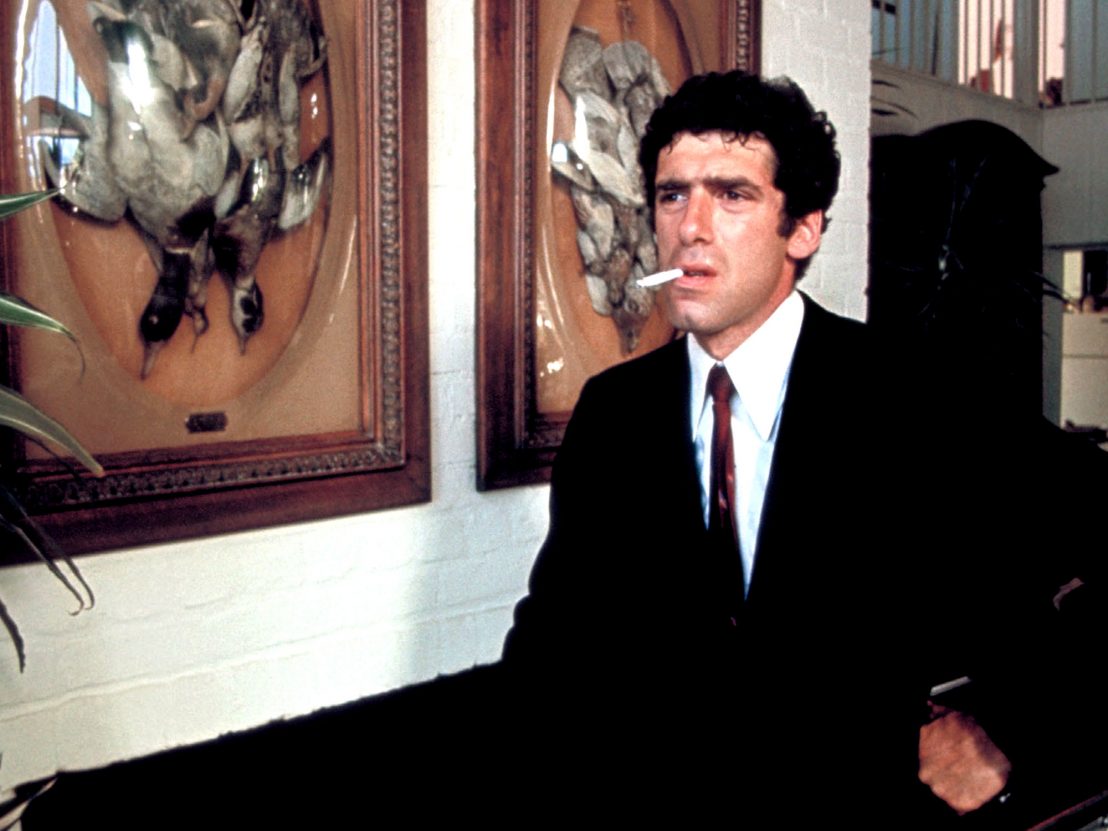 Robert Altman borrowed the title of Raymond Chandler’s The Long Goodbye for both his 1973 film, but it could just have easily been called Hooray For Hollywood (the Doris Day song is ironically played over the end credits); the Los Angeles suburb drawing much of the directors focus and itself as much a character as Elliott Gould’s Philip Marlowe.

A lot had changed in Hollywood since the book’s release in 1953 and the beginning of Altman’s involvement in the early 1970s. Marlowe, a man of morals and integrity seemed at odds with contemporary society, though rather than becoming a stumbling block this conflict became the film’s thematic driving force.

Gould’s interpretation bears little resemblance to the usual Marlowe’s archetype, defined by the Bogart era, he shuffles and shambles, unkempt and wearing his suit like pyjamas rather than as a statement of intent. But the PI’s moral code remains intact, the burden of conscience casting him adrift in a societal cesspool. And, of course, that ever-present cigarette remains. Marlowe averages one about every three minutes, in the pulp era this would be commonplace, but now it earns him the nickname “Marlboro man” and his free-spirited neighbours would much rather whip up some ‘brownies’.

With pulp fiction out of fashion and Chandler’s work past its prime, a faithful adaptation was never on the cards. Accordingly, screenwriter Leigh Brackett took many liberties with the novel to give it a more cinematic structure, and in turn Altman deviated further still. The opening sequence where Marlowe unsuccessfully attempts to feed his cat was all Altman’s doing, and this disarming moment outlines the director’s true intention.

When Marlowe cannot provide the right type of cat food – it’s Coury brand or nothing – the cat runs away. It turns out that the animal has only been using Marlowe for food, and this display of disloyalty is later mirrored in the film’s ending, when it is revealed that Marlowe’s other supposed friend, Terry Lennox (Jim Bouton), has betrayed him. Marlowe’s supposed acceptance with the hedonistic society (“It’s okay with me”) reaches its end when he discovers he has been used, and in an out-of-character moment he shoots Terry. Altman felt this ending was so crucial he had it written into his contract that it could not be altered in the edit.

The idea to create a disconnect between Marlowe and modernity was developed early on, with Altman jokingly referring to him as ‘Rip Van Marlowe’ as if he had just woken from his ’40s and ’50s heyday. The film represented an opportunity for Altman to satirise rather than remain faithful to the hard-boiled genre, instead revising it for the present day, just as he did with the war genre in M*A*S*H, the western in McCabe & Mrs Miller and the musical in Nashville. Gone were the harsh shadows and venetian blinds, replaced with a woozy, bleary-eyed haze.

Not so much hard-boiled as a shaggy-dog story about a cat, the plot is not the director’s primary concern. Rather, his focus is on the characters and their interactions – and in Altman’s Hollywood, characters serve themselves rather than the plot. Events unfold unpredictably, and no one but Marlowe is interested in tying everything together if there’s no promise of personal gain. The world is at odds with Marlowe, and Altman emphasises his disdain throughout the film.

Aside from the casting of regular collaborator Gould (who owned Marlowe’s ’48 Lincoln Continental), other characters became embellished by their actor’s off-screen lives, particularly that of Eileen and Roger Wade, played by Nina Van Pallandt and Sterling Hayden. Pallandt had suffered a messy affair Howard Hughes hoaxer Clifford Irving, and her musical duo Nina & Frederick famously covered ‘Puff, the Magic Dragon’, a song that chimed with a California which had swapped tobacco for marijuana. And Hayden – who had fallen foul of The House Un-American Activities Committee – had long been racked with the guilt of naming names, perfectly captured Nixon-era paranoia.

Along with cinematographer Vilmos Zsigmond, Altman uses the visuals to side the audience with Marlowe; the camera is in constant motion and images are often obscured by natural framing in order to create a voyeuristic effect, much in the way that Marlowe experiences events being a PI. It’s almost as if the audience should not be witness. This also adds to the film’s unpredictability – so much so that many were led to believe the dialogue was largely improvised, which was not the case.

Altman wanted to evoke old postcards for the film’s palette, something more like memory. Fitting with the notion of Marlowe’s long slumber, Zsigmond suggested ‘flashing’ the film stock, which the pair had experimented with on McCabe & Mrs Miller. This meant exposing the negative to excess light reducing the contrast and softening the Technicolor spectrum to more pastel hues to create to films fabled haze-like effect, inducing into the world of Marlowe. The soundtrack also has a beleaguering effect. The eponymous track (composed by a pre-Spielberg fame John Williams) morphs and mutates through different sources – a dive bar piano, market muzak and even a Mexican marching band – in order to create a continuation of disorientation.

Marlowe’s journey through the seedy underbelly of Altman’s Hollywood created a marketing dilemma, with the studio unsure of exactly how to convey the film’s tone. It was ultimately released under a more traditional guise, with the tagline ‘Nothing says goodbye like a bullet.’ Because of this, the film flopped, failing so catastrophically that Altman pulled it from theatres entirely to focus on a new marketing approach. It was eventually re-launched in New York, with a tongue-in-cheek MAD Magazine style poster, with quipping caricatures such as Pallandt and Altman with the to and fro: “How do you want me to play it?” “From memory!”

Though successful in its second run it was too little too late. A film based on Chandler – though not presented in the style of typical cinematic Chandler – had alienated its core audience. But Altman always believed his Marlowe was faithful to Chandler’s character. Gould had made him fallible and flawed, his interpretation a stark contrast – in obvious ways – to earlier, more heroic incarnations. Altman knew it wasn’t Chandler that audiences were wanting, it was Bogart. But when Marlowe exits into the distance at the end of the film – with a skip in his step and a click of his heels – the feeling is that this is unmistakably an Altman film. Hooray for Hollywood indeed.