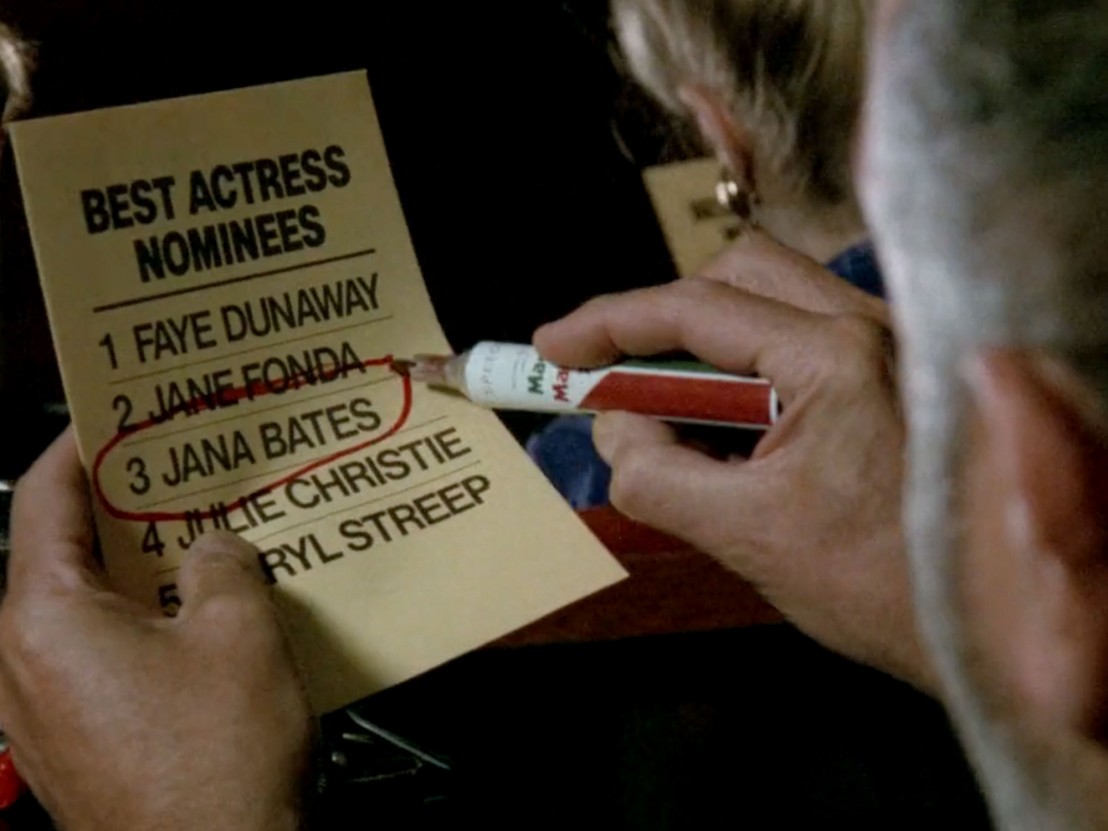 “I‘d like to point out that for the first time in the entire history of the Cannes Film Festival, this prize is awarded to an actress playing in a horror movie.”

It is 1981, but these words from the man officiating over the awards ceremony towards the end of David Winters’ The Last Horror Film (aka Fanatic) hold true even today: while away from the Croisette there is always plenty of backroom horse-trading over B-movies and genre titles, horror is generally considered too low a form to merit the kind of acknowledgement and acclaim that an international film festival’s prize would confer (notable, and notably rare, prize-winning exceptions include Kwaidan in 1965, The Shout in 1978 and Thirst in 2009).

So when we see the Cannes Jury nodding approvingly during a screening of a film in which a character played by scream queen Jana Bates (here played by genuine scream queen Caroline Munro) continues screaming as her face is burnt off, and then her name being ticked for Best Actress (over Faye Dunaway, Jane Fonda, Julie Christie and Meryl Streep), we already have an idea that this is just another layer of wish fulfilment in Winters’ mesmerising metahorror.

Itself a genre film shot on location during the actual 1981 Cannes festival, The Last Horror Film exploits the realities of cinema’s biggest dream market, while weaving into this world of cutthroat deals the kind of slasher plot that can only happen in the movies. As such, this is horror of a decidedly self-reflexive stamp, made two decades before Brian De Palma’s Femme Fatale would again use Cannes as the backdrop to all manner of postmodern play in the world of genre. It was also made over a decade and a half before Wes Craven’s Scream took the crown for the supposedly innovative nature of its meta approach to horror – and, whether by coincidence or not, the film-within-a-film which has just won Jana her award is also called Scream.

Into this world of red-carpet glamour wanders schlubby, sweaty, decidedly unglamourous Vinny Durand (Joe Spinell), an avid viewer of – and masturbator to – horror films. If Jana’s surname Bates points to Psycho, Vinny embodies the spirit of Hitchcock’s film. A manchild living under the thumb of his mother (who is played by Spinell’s own mother, Filomena Spagnuolo), Vinny dreams of making Jana, for whom he harbours an unhealthy obsession, the star of his very own Oscar-winning movie. Vinny is both a fantasist and, in his regular oneiric encounters with a more successful version of himself, somewhat schizophrenic – and his coexisting personas all allude slyly to Spinell’s past filmography.

So on the one hand Vinny is a deluded New York cabbie, recalling Spinell’s memorable appearance in the opening scene of Taxi Driver as the man who hires the not dissimilar Travis Bickle to pick up night fares – and as Vinny prowls after Jana in Cannes, we keep hearing background news reports about the recent attempted assassination of Ronald Reagan by a man expressly obsessed with Scorsese’s film and its female star Jodie Foster. There is an anxiety of influence in this blurring of fiction and reality, with different characters (members of the press, an Orthodox priest) asking aloud what psychological effect films of violence and horror might be having on their viewers, even as horror star Jana finds herself being stalked by a deranged fan, and everyone around her disappearing or being viciously killed.

Working out where the truth lies in this hall of mirrors is half the fun – while the other half is wondering to what degree the unhinged Vinny might be reprising Spinell’s titular role as the murderous mamma’s boy in Maniac. And when we see Vinny disguising himself in a gendarme’s uniform, we are reminded of his rôle as a policeman in Cruising, the William Friedkin film that carefully plays upon the thin blue line between harmless dress-up and psychotic imposture.

“I believe people understand the difference between real life and illusion,” insists Jana at a press conference to promote Scream. “I’m just an actress playing a part in a movie.” The truth is that, even as Winters was shooting his film on location in Cannes, an actress really did win a Jury Prize for her performance in a horror film (unprecedentedly so, as the announcer says, unless you count Susannah York in 1972’s Images). For in 1981 Isabelle Adjani garnered a Best Actress nod for two films, Quartet and Possession, the latter very definitely horror (and destined for ‘video nasty’ status in the UK).

Adjani herself is glimpsed in The Last Horror Film arriving at a screening, and Croisette posters for both her winning films are also included (including a multi-angle mini montage of the Possession billboard). “Art,” as Jana puts it, “is also an imitation of life.” Still, it wouldn’t happen again until Charlotte Gainsbourg won in 2009 for her turn in Antichrist – and while The Last Horror Film would itself win numerous prizes, mostly at genre-dedicated festivals (and certainly not at Cannes), its improbable star Spinell, so fleshily human, so creepily monstrous, so pathetic and pathological, would go, as ever, criminally unrecognised.

The Last Horror Film is available on DVD from 14 March courtesy of Fusion Media Sales.