Discover this medieval monster movie inspired by Army of Darkness 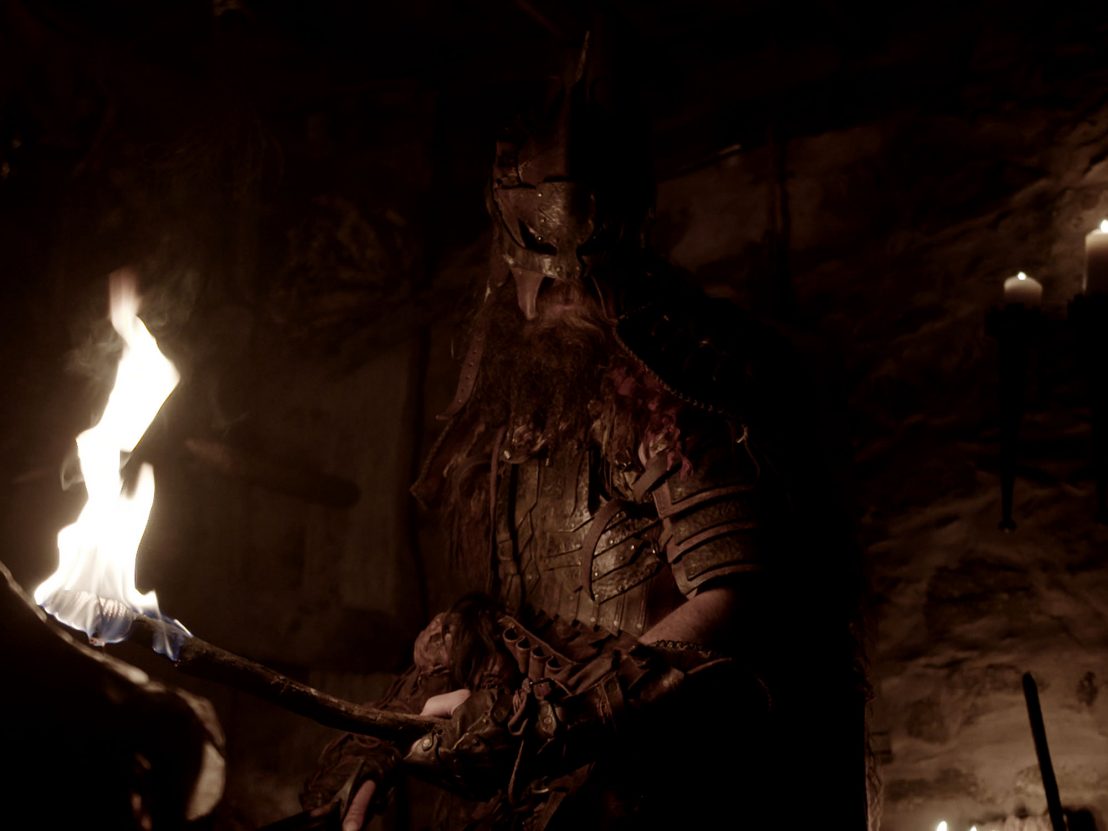 “Shhh, it’s okay,” the Father (Christopher Rygh) reassures his sleepy young Daughter (Cora Kaufman) in her makeshift tent of twigs, at the beginning of The Head Hunter. Something ferocious has invaded the perimeter of their snowy encampment, but the Father, a bearded hulk of a man, has just fought and slain it in an off-screen battle, heard but not seen. What is visible is the copious blood on the Father’s sword and indeed on his hands, and now on the fur that covers his Daughter. “I always thought I could protect her,” he is next heard saying in voiceover. “What took her from me is still out there. Now I wait for it to return.”

The Head Hunter is a film of ellipses and aftermaths. Just as we do not see the creature that the Father fights at the start, or the murder of the Daughter by something else, we also do not witness the many other fights of this professional monster slayer. Instead, we see their consequences: the horrific, gaping wounds that he bears on his body (but quickly cures), and the severed heads of the vanquished creatures that he places on stakes inside his stone cottage.

In this unnamed Northern country, during a Dark Age where mythic monsters still walk the land, the Father leads a solitary life away from the Castle community. He spends his time repairing his armour, brewing a special salve that miraculously heals even his most grievous injuries, and visiting his Daughter’s grave. And whenever a distant horn sounds an alarm to summon him, he heads out to take down the next ungodly threat to the kingdom. When the monster that killed his daughter does eventually return, he takes its head – only for that head, now magically revived, to go on a desperate search for a new body. 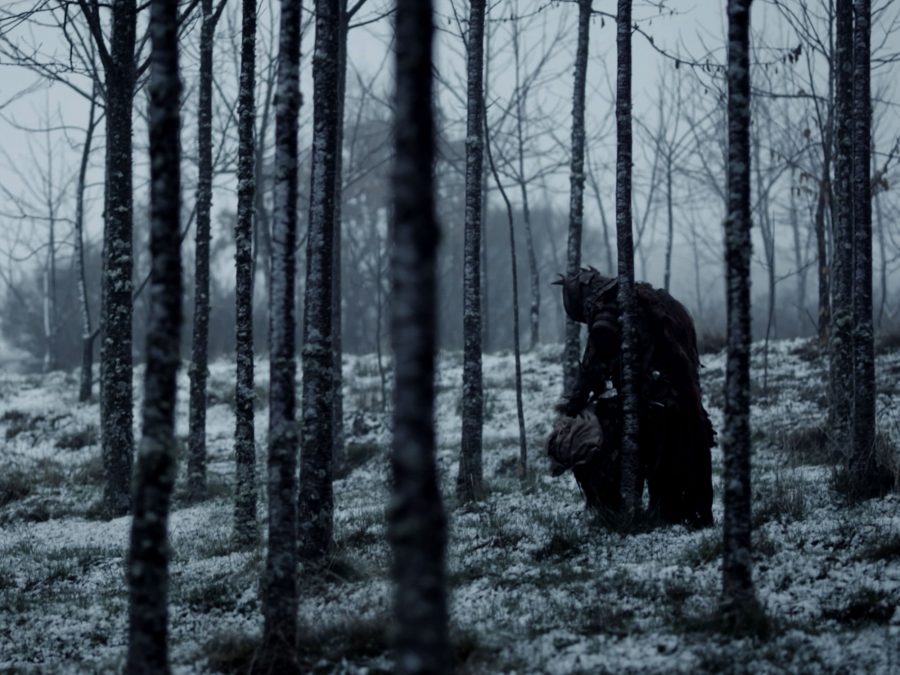 Directed and edited by Jordan Downey, who also co-wrote the screenplay with cinematographer Kevin Stewart, The Head Hunter is a medieval monster movie which makes a virtue of its micro-budget. For by focusing more on the inner workings of its protagonist’s day-to-day existence than on the external spectacle of his slayings (which the film could never have afforded to show anyway), it comes across as a close study in psychodrama.

Played by Rygh (in his first lead role) with a gruff intensity, the Father is an efficient predator who hardly seems more human than the creatures he faces. Holed up in a hovel whose filth you can practically smell, this social exile talks only to the dead and lives only to kill. And although his story seems very simple, he leaves us wondering whether he might in fact be less loyal knight than rogue murderer inhabiting the confused and guilt-ridden perspective of his own confused headspace, and struggling not so much with monsters “out there” as with inner demons that threaten to take over the last vestiges of his humanity.

Ellipses are just parts missing from a narrative’s body, demanding substitution. We do not know much about the Father’s background (or indeed what happened to the Mother), but we do know that he is now a literal serial killer, and what is more that he collects gruesome trophies from his slayings. We cannot be sure how the Father’s daughter died, but we do know that when we last see her, he is kneeling over her supine body with bloody hands.

When the creature that killed her later digs up her headless skeleton to use as its own body, and the Father – after begging her forgiveness – decapitates the monster from her, might this addled warrior not just be restaging an unspeakable act that he has already committed on his Daughter’s body? If the killer creature is just a construct of the Father’s traumatised, psychotic mind, then ultimately The Head Hunter finds a way to literalise this notion, and to show the monstrous head that rules the man’s hulking frame.

So there are (at least) two ways of interpreting the Father’s tragedy. On the one hand, it is a straight story of a vengeful monster hunter meeting his messy end. On the other, it is a more internalised, unreliable representation of a mass murderer inventing fanciful scenarios to avoid confronting his deeds and himself, until eventually he yields fully to the control of the monster within. 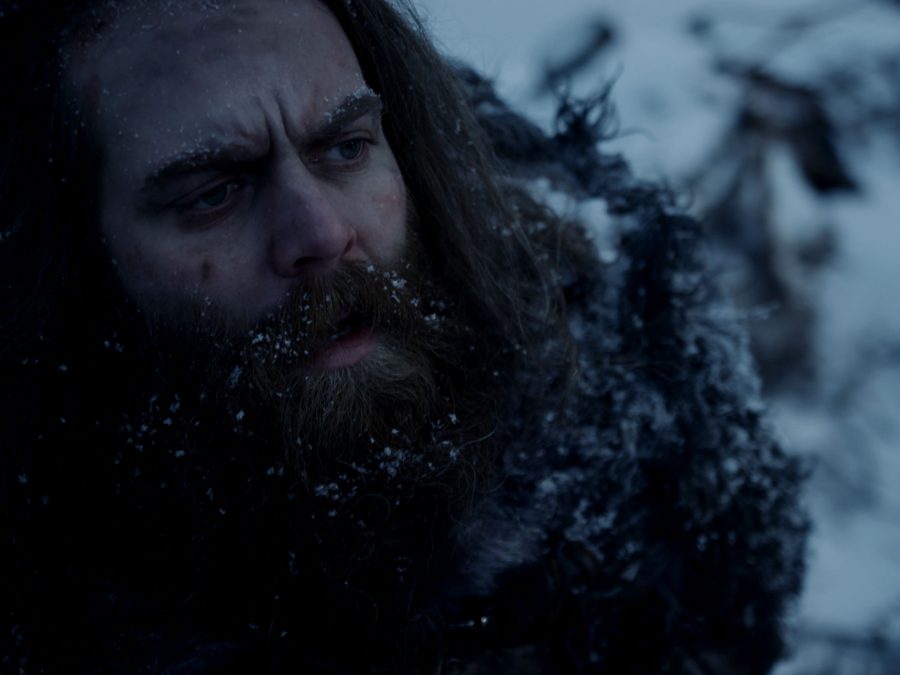 The film’s principal intertext, the Evil Dead trilogy, supports either one of these readings. Like Sam Raimi’s films, The Head Hunter features a cabin in the woods, a bound book of monsters, and demonic beleaguerment – and the Father is a precursor to Bruce Campbell’s Ash Williams, similarly surviving extreme bodily damage, and similarly having to do battle with endless monsters, including a buried, decapitated loved one who has risen from her makeshift grave.

Yet the demons that Ash must fight are often extensions of his person, be it the possessed hand that he cuts off his own arm in Evil Dead II, or the ‘Evil Ash’ doppelgänger that proves his ultimate nemesis in Army of Darkness, which like Downey’s film has a medieval setting. The Father too may be merely in conflict with himself and his own fracturing psyche. A panicky scene near the end in a dark tunnel evokes Ben Wheatley’s Kill List, another film about a psychologically disturbed man who externalises his inner conflicts as elaborate paranoid plots.

One other allusion here suggests the Father’s status as an ur-slasher – a psycho-killer avant la lettre. For in the Father’s cottage there is a chair that he has fashioned from the bones, teeth and skin of both animals and his victims – a chair just like the ones decorating the slaughtermen’s home in Tobe Hooper’s The Texas Chain Saw Massacre.

Accordingly, the Father is both hero and villain of this ambiguous fable which, like a headless corpse, requires a certain supplementation for its proper identification. Any way you piece it together and read between its scenes, though, Downey and his skeleton crew have crafted a richly atmospheric and relentlessly dark saga of evil incorporated. This gritty, gory labour of love is far more than ok.

The Head Hunter is available on Blu-ray from 101 Films on 12 April. 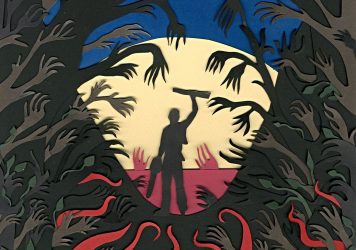 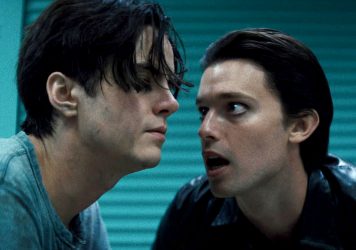