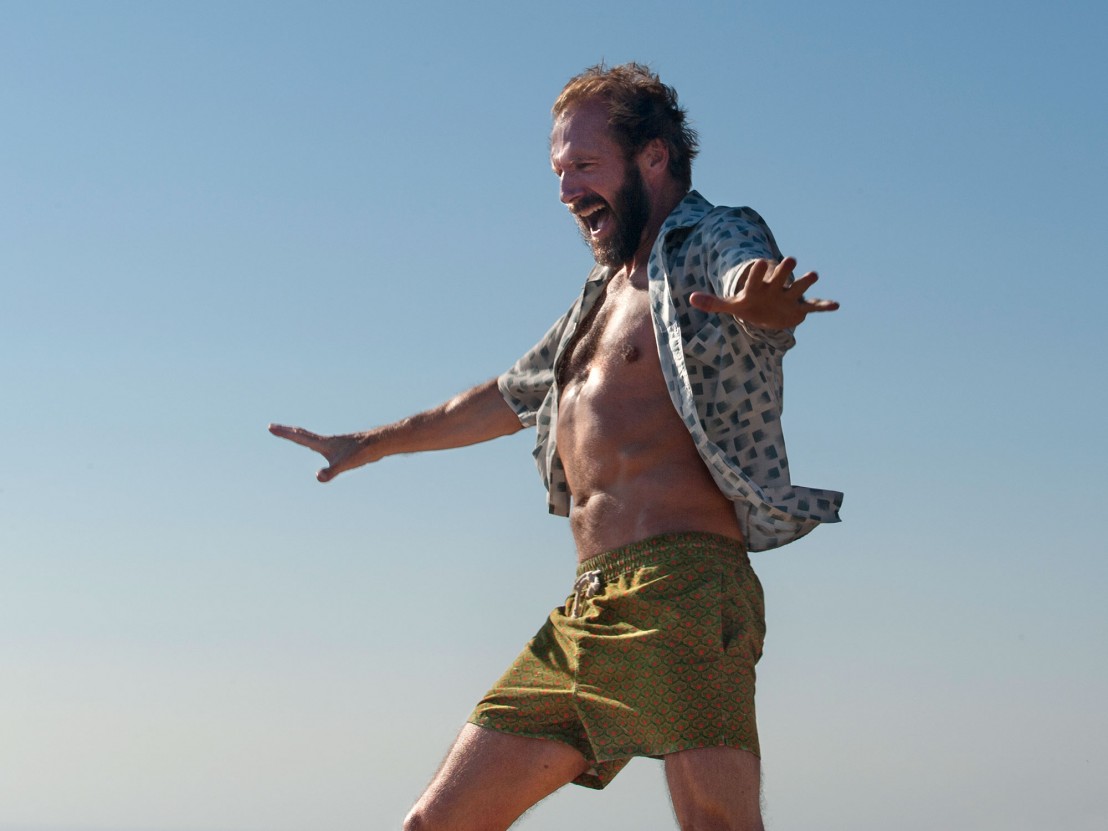 Departing from his typically straight-laced on-screen persona, Ralph Fiennes throws some serious shapes in director Luca Guadagnino’s new film, A Bigger Splash. Fiennes plays Harry Hawkes, an eccentric music producer who springs an unexpected visit on his rock-star ex-lover Marianne Lane (Tilda Swinton), who is holidaying with her boyfriend (Matthias Schoenaerts) on the Italian island of Pantelleria. In a stand-out scene, Hawkes gyrates to the Rolling Stones track ‘Emotional Rescue’ while strutting around Lane’s villa.

Fiennes’ erratic, infectious frugging looks like inspired improvisation but was actually carefully planned by choreographer Ann Yee to perfectly encapsulate the maniac garishness of his character. This dazzling dad-dancing got us thinking about other memorable dancing scenes. From eloquent hip-thrusting to ball-room dancing here are 10 boogielicious performances from actors who really learned their moves.

Amazingly, Toby Maguire actually undertook special training to perfect these god-awful moves, working with a choreographer plus a number of other movement specialists. The question of whoever thought a sinister Peter Parker finger-clicking his way around New York would be a good idea remains a mystery.

Never give into peer pressure. Mark Ruffalo learns this the hard way as he’s bullied by Jennifer Garner into giving a rendition of ‘Thriller’. Ruffalo’s apparent struggle to learn the iconic dance is clear in this awkward, arrhythmic performance which quite literally embraces the horror elements of this Michael Jackson hit.

It should come as no surprise that Lee Grossman – a foul-mouthed, ill-tempered studio executive who gets down to Ludacris – was entirely Tom Cruise’s creation. Embodying the energetic swagger of a first-time clubber, Cruise’s jiving is eye-catching for all of the wrong reasons. Lord of the Dance he ain’t.

Mimicking the intensity of musical legend Otis Redding, Duckie’s (Jon Cryer) dedication is never in doubt, quite literally throwing himself around the new wave music store, TRAX. Cryer collaborated with renowned choreographer Kenny Ortega just one night before shooting this scene. The result of their labours gets an A+ for effort but is docked marks for execution as it’s really more rhythmic stumbling than dancing.

A Bigger Splash isn’t the first time Ralph Fiennes has got his groove on. Fiennes exhibits his dancing versatility as Count László Almásy in this intensely romantic foxtrot. Fiennes and Scott Thomas required hours of rehearsal with choreographer Carolyn Choa in order to capture their characters’ instant attraction during this ballroom dance. Although the end result is technically unshowy, the scene delivers an affective emotional punch.

5. Julia Stiles – Save the Last Dance

Insistent on performing all the dancing herself, Julia Stiles worked with Fatima Robinson and Randy Duncan, a hip-hop and ballet choreographer respectively, training six hours a day for six weeks. Stiles’ perseverance is rewarded, her convincing fusion of dances is the highlight of this clichéd chick flick.

Despite Audrey Hepburn’s previous ballet experience she still required lengthy rehearsals with choreographer Eugine Loring and her dancing and acting idol Fred Astaire in order to master this toe-tapping solo number. Hepburn’s fluid, infectious and surprisingly expressionistic performance is sure to instil belief in even the most klutzy viewer.

With no previous dancing experience, Nick Frost went from complete novice to salsa king in Cuban Fury. Practising seven hours a day, every day for seven months, Frost surely wins the award for most committed. Frost for Strictly, anyone?

Controversy lingers over how much of Natalie Portman’s display is genuine and how much was performed by her dance double, Sarah Lane. Yet this really shouldn’t detract from Portman’s efforts, especially considering she worked with ballet teacher Mary Helen Bowers for five hours a day, six days a week for several months prior to filming. Portman even undertook toe exercises to hep strengthen her metatarsals for the demanding routines in the film. Elegant and hypnotic, this is ballet at its most expressive and evocative.

Helping to popularise disco music around the world, John Travolta’s joyous hip-thrusting masterclass to Bee Gees classic ‘You Should Be Dancing’ has only grown in stature over the years. Dance instructor Deney Terrio and choreographer Lester Wilson helped train Travolta for three hours a day over nine months. Additionally, Travolta ran two miles every day, shedding 20 pounds in the process. If Travolta’s suave, electrifying disco fever doesn’t get you up on your feet then nothing will.

Which memorable dancing scenes have we missed? Let us know @LWLies