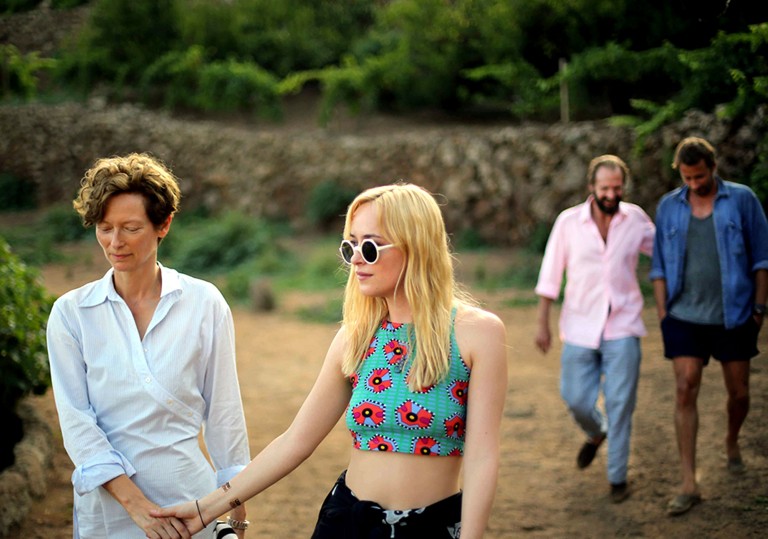 I Am Love was a beautifully decadent outlier on the art-house circuit in 2009.

A modern cinematic opera – the sun-kissed bacchanal followed by the tempestuous comedown.

In an early scene of Luca Guadagnino’s A Bigger Splash, his follow-up to 2009’s I Am Love, dinner companions admonish Harry (Ralph Fiennes) over his choice of urinal – “Harry, that’s a grave!” “Yeah, well,” he quips, “Europe’s a grave!”

Riffing on Jacques Deray’s 1969 film La Piscine, A Bigger Splash pursues this death-of-Europe narrative with a level of bawdy panache that belies the seriousness lurking beneath its polished veneer. Casting aside Deray’s more brooding eroticism, the picture puts forward a friskier, more wanton vision of sexuality. Imagine the self-obsessed bourgeois navel-gazing of Lawrence Kasdan’s The Big Chill distorted into a sun-kissed bacchanal. It’s a terrific picture; cool, lascivious and hot as hell.

Tilda Swinton plays Marianne, a rock singer rendered temporarily mute. She is holidaying in the Italian countryside with her partner Paul (Matthias Schoenaerts), a quiet, burly photographer, still reeling from a recent suicide attempt. Their sojourn is interrupted by the unscheduled arrival of brash, flamboyant Harry, a former flame of Marianne, along with his recently reacquainted teenage daughter, Penelope (Dakota Johnson).

A Byronic cad, Harry – Fiennes at his peak – is a gabby, preening rake who is clearly there to win back Marianne. In fact, the 19th century poet proves to be a surprisingly pervasive influence; not only does the setting recall Villa Diodati, the mansion on Lake Geneva where Byron, fleeing from debt and rumour, holed up in 1816, but, just as Byron was the last of the Romantics, Harry himself feels like the last of their modern day iteration – a libertine from the age of the rock star.

Read an interview with Luca Guadagnino exclusively in LWLies Weekly

The late-period Rolling Stones are another fixation throughout. In a key scene, Harry breaks into an impromptu dance to ‘Emotional Rescue’, the record which marked the end of the band’s golden era. Guadagnino makes A Bigger Splash feel like ‘Emotional Rescue’, with its high gloss and louche millionaire swagger, before shifting into the apocalyptic doom boogie of ‘Gimme Shelter’ (“A storm is threatening / my very life today”).

The key to this transition is Penelope. With the camera lingering over her midriff, she is introduced as a slinky, seductive presence, but it soon becomes clear that she, with her slyly deployed barbed comments, is the savant of the group (eagle-eyed viewers will note her revealing choice of reading material); the disrupter ushering in the storm.

The third act plot turn which blights La Piscine is beautifully handled in A Bigger Splash, with the picture’s operatic structure, along with Guadagnino’s irrepressible flair for high melodrama, amplifying the sensory impact. In the final act, the tensions and resentments which were hitherto concealed by carnality bubble over.

For much of the film, we’re swept up in its intoxicating pre-coital rush. But as darkness descends in the closing moments, finer points come into greater focus, culminating in a morally ambivalent epitaph for the modern Romantics; the bohemian rock stars and their libertine pretenders. Which brings us full circle to Lord Byron and the end of 19th century Romanticism, dying in exile with its principal progenitors in Italy and Greece. Perhaps Harry is right – Europe is a grave.

I Am Love was a beautifully decadent outlier on the art-house circuit in 2009.

A modern cinematic opera – the sun-kissed bacchanal followed by the tempestuous comedown. 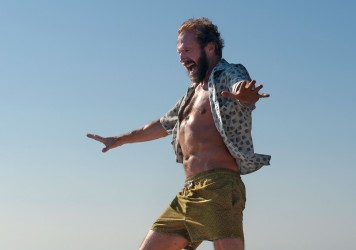