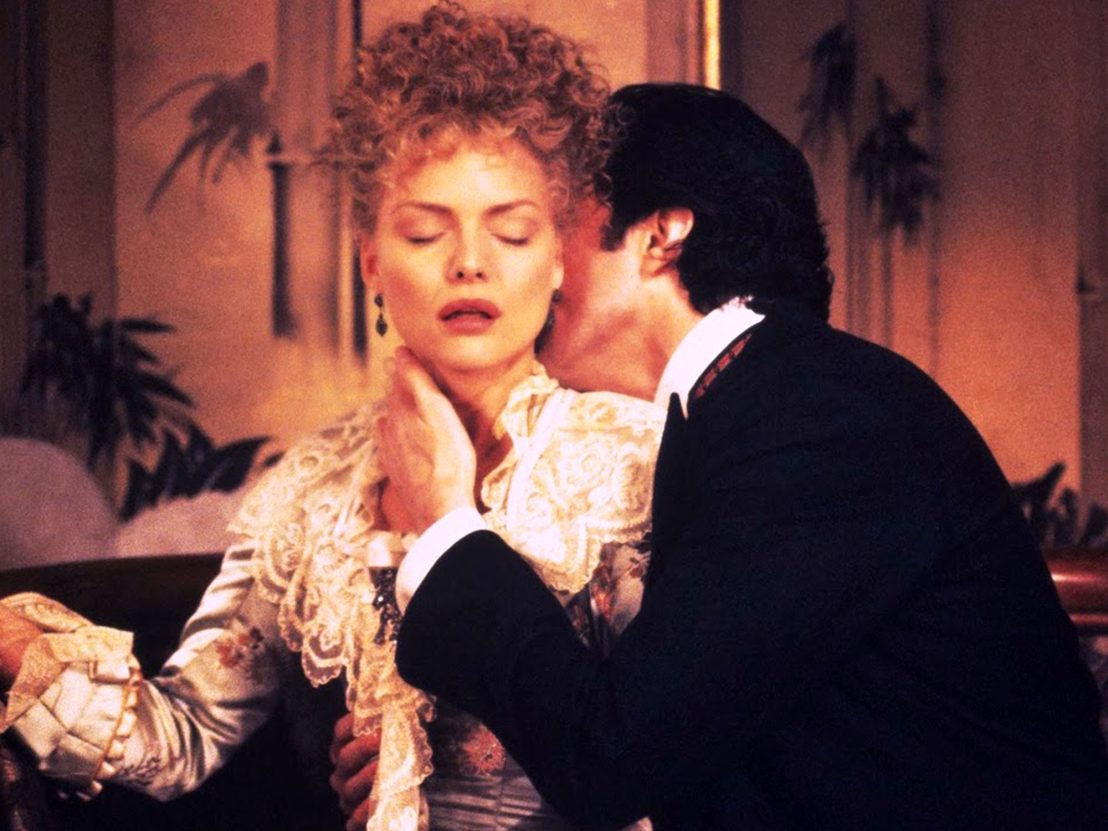 No profanity, no bloodshed, no sex, no De Niro and no DiCaprio, but The Age of Innocence is a Martin Scorsese film through and through. The director’s period romance rarely features in discussions of his greatest work – it even failed to crack the top 20 in our recent ranking of his films – and yet it is full of his trademark themes and stylistic flourishes. Scorsese himself holds the film in high regard, once describing it as “the most violent [film] I ever made,” which is a fairly bold claim from a filmmaker who has brought us some of the most brutal scenes in movie history. So what makes The Age of Innocence a violent film? In an interview with Roger Ebert, Scorsese elaborated:

“What has always stuck in my head is the brutality under the manners. People hide what they mean under the surface of language in the subculture I was around when I grew up in Little Italy, when somebody was killed, there was a finality to it. It was usually done by the hands of a friend. And in a funny way, it was almost like ritualistic slaughter, a sacrifice. But New York society in the 1870s didn’t have that. It was so cold-blooded. I don’t know which is preferable.”

Nestled between Cape Fear and Casino, Scorsese’s adaptation of Edith Wharton’s Pulitzer Prize-winning novel about society elites was his first PG-rated film since 1977’s New York, New York. Scorsese was given the book by critic-turned-screenwriter Jay Cocks, who knew of the director’s fondness for costume drama. After making two grisly crime-dramas in the early ’90s, Scorsese apparently felt it was the right time to explore a different kind of violence, “the spirit of exquisite romantic pain.”

In bringing Wharton’s rich, atmospheric prose to life, Scorsese spares no detail or expense in immersing us in the settings described in the novel. It’s as faithful a recreation of old New York as his later epic, Gangs of New York. So committed to authenticity was Scorsese, he even commissioned 200 copies of paintings by period artists such as James Tissot, purely to create a more convincing backdrop. Michael Ballhaus’ camerawork drinks in the opulent objects and ornate fixtures that furnish almost every room in the film. This materialism is exposed as gaudy and profligate, but as in The Wolf of Wall Street, Scorsese’s real skill is his ability to make it all this lavish excess seem perversely attractive.

The world Wharton evokes in her novel is one governed by artifice and propriety. It’s a novel that demands multiple readings, as so much of what the characters think and feel is buried under formalities, or teasingly implied by the caustic narrator. It’s a stark contrast to Scorsese’s most iconic films, which are typically marked by volatile characters such as Travis Bickle, Jake LaMotta and Tommy DeVito, each of whom wears his emotions on his sleeve and is easily provoked into explosive fits of rage. 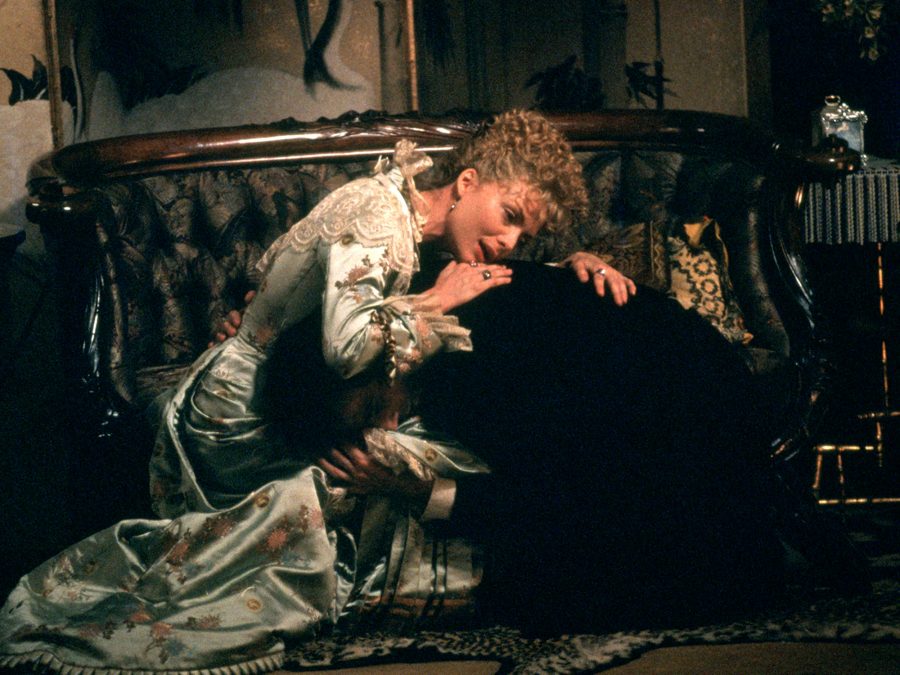 But really, The Age of Innocence just shows another side of the same coin. Where Taxi Driver and Raging Bull are about the chaos that ensues when the id is unfettered, this film explores the turmoil created by a society where true emotions are stifled and superficiality rules. Either way, the characters end up alienated and alone.

Newland Archer (Daniel Day Lewis), a wealthy dandy, and Countess Ellen Olenska (Michelle Pfeiffer), a divorcee considered to be damaged goods, are lovers who struggle against rigid social conventions. Archer is engaged to a woman he doesn’t love, the naive but respectable May Welland (Winona Ryder). Ellen is expected to shy away from the public after her scandalous separation. That they’re torn apart by such arbitrary codes of “form” is tantamount to the murder of genuine love.

Then again, this sense of finality in death which Scorsese alludes to is noticeably absent in the gut-wrenching final scene, where a much older Archer arrives at Ellen’s door but is unable to summon up the courage to go inside. With the shutters of her apartment are symbolically closed above him, Archer sits on a bench reflecting on what he has lost. Daniel Day-Lewis is outstanding in the role, conveying the hurt and melancholy brought on by a lifetime spent asking ‘what if?’.

It’s an ending written by Wharton, but one in keeping with other memorable Scorsese denouements. As with Raging Bull, Goodfellas and The Wolf of Wall Street, the lingering image we’re left with is one of overwhelming dissatisfaction, of characters questioning just where it all went wrong. It’s more affecting and unsettling than the sight of any physical barbarity.

Yet it is Michelle Pfeiffer’s Ellen who is the heart of the story. There have been many criticisms levied at Scorsese over the years that he is a misogynist who reduces female characters to crude archetypes. Cameron Diaz’s limited role in Gangs of New York is often cited as a prime example, but passive wives, girlfriends and prostitutes with scant dialogue abound in his films. Ellen Olenska, however, is a symbol of late 19th century female transgression, self-confidence and defiance in the face of social decorum. Pfeiffer is perfectly cast, striking just the right balance between seductive and vulnerable, thereby preventing her character from becoming a mere cipher for liberated sexuality.

Pfeiffer’s chemistry with Day-Lewis is crucial and completely absorbing. And where there is titillation and sex in many of Scorsese’s other films, here we have genuine eroticism. The moment where Ellen and Archer steal a kiss in the back of a carriage is charged with a sensuality not present anywhere else in the director’s canon. Scorsese immediately follows this swell of passion with a jarring scene in which Archer stares insipidly across at May, who will eventually tear him away from his true love. It’s a quietly devastating piece of storytelling that further draws our attention to the emotional turmoil at the core of the narrative.

The Age of Innocence isn’t a perfect film. Parts of it seem a little dated now, not least the use of a narrator quoting entire passages from the book. No amount of reappraisal is likely to convince anyone that this is Scorsese’s best film, but perhaps it’s time to recognise it simply as an exquisite piece of cinema as well as a terrific screen adaptation. You’ll struggle to come across another PG-rated period drama quite as brutal as this.