Meet the East African VJs whose unusual craft represents an art form in its own right. 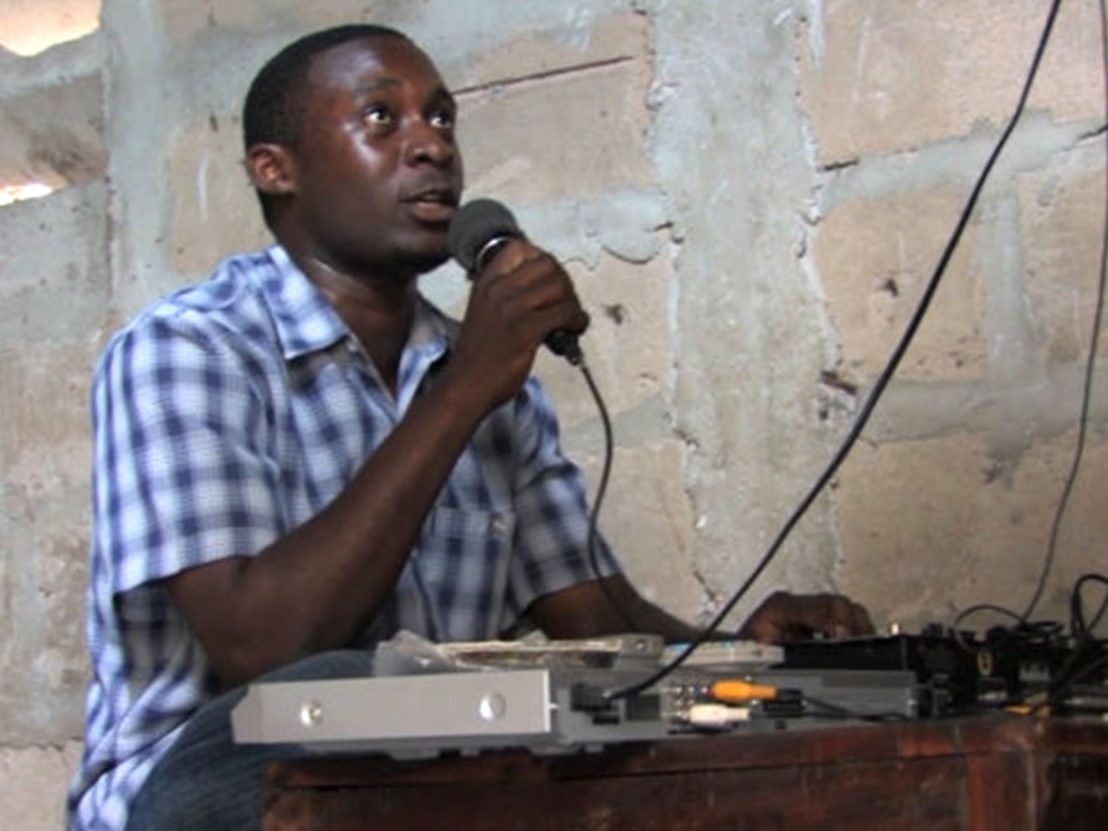 In Tanzania, foreign films are pirated on video and narrated in Swahili by video jockeys known as VJs in order to be intelligible to a local audience. Popular video narrators are local celebrities in their own right, fading the original soundtrack in and out, reenacting filmic dialogue and adding their own commentary to proceedings. The superimposing of one narrative art form over another serves as a linguistic and cultural translation, and has been described by Lufufu – the original Tanzanian video jockey – as “turning rice into pilau”, equating foreign films as a raw material that must be prepared according to certain principles of local cuisine in order to be turned into a palatable dish.

Lufufu initially had the idea while watching Chinese live interpretation of Vietnamese propaganda films while based in China for military training, and the practice is either performed live in public video parlours or recorded and sold in shops. In its present form in East Africa its roots lay in Uganda, where Lufufu learnt the technical aspects of the job, and to this day Uganda is the country leading the way in this art form. Understandably, the craft has been interpreted as an amalgamation of film with the much older medium of oral storytelling, but despite this precedent video narration is an entirely modern phenomenon.

One film that has been appropriated in this way is James Cameron’s 1997 epic Titanic, which has certain themes that resonate with African viewers, such as the conflict between collective social norms and the portrayal of a society marked by social inequality. Yet the foreign content must undergo a domestication, and that’s where the VJs come in. Their craft can be understood as one of repair, filling the inevitable leaks in meaning that occur in the transferral from one cultural context to another.

On such VJ star is DJ Mark, whose trendier, slang-filled commentary is popular with younger audiences. In particular, his use of geographical references is much closer to the everyday life of Tanzanian spectators than the social differences between the early 20th century elite and working classes:

Tanzanian VJs have considerable agency in their appropriations, and the result is not a faithful interpretation but rather significant remediations. The foreign images lose their governing function in telling the story, and instead the voice-over takes the upper hand in the narrative. One sequence from Lufufu’s translation of Titanic exhibits this well. The original film relies solely on images to transmit Jack’s uneasiness and unfamiliarity when he is invited to dine in first class, as he imitates a little pantomime to get accustomed to the appropriate gestures. However, Lufufu’s translation never stops, and he provides an internal monologue of Jack:

“Everyone here has his partner. And what about me? If only I had someone else by my side… One hand must be held behind the back, and I should stand like this while I greet people, ‘shikamo, shikamo’ [a traditional respectful greeting]. This is poverty! Indeed, poverty is something bad. Even the girl I am waiting for is the fiancée of someone else.”

The hierarchy of the original and the copy is thus reversed, imbuing the commentary with considerable subversive potential. This is further demonstrated in instances where the VJ distracts the audience completely from the original in order to fulfil personal gain. In the scene where Jack is drawing Rose, DJ Mark uses the lapse in dialogue as an opportunity for shameless self-promotion:

“Slowly the young man begins to draw with intense concentration so that he can depict her the way she is… Remember this film goes by the name of Titanic and is brought to you by MGL Video Library which is found in Yombo Vigunguti by the bridge, and who can be reached on number 0713381436. This film is announced by DJ Mark AKA Jogoo and I’m available on my number which is 0712532484.”

A Tanzanian graphic novel similarly remediates the Titanic myth for a local audience, taking the allegorical potential of the sinking ship as an educational lead-in to a national tragedy of similar proportions. The sinking of the MV Bukoba in Lake Victoria only a year before the film was released was a result of overloading caused by negligence, relating to the portrayal of the Titanic in Cameron’s film as seeking the glory that comes with breaking a speed record. This interpretation of the tragedy as being caused by a naive belief in technological progress resonates with an African audience, and demonstrates the different meanings the Titanic myth has acquired in its African versions.

In the case of Swahili narrations of Hollywood films, it’s clear that VJs are cultural producers who relish these creative encounters with transnational global media. There is a wealth of material to fuel this phenomenon, and it would be interesting to look at the Swahili narration of sci-fi films such as Star Wars, or fantasy films like The Lord of the Rings, to see how the VJs attempt to make these other worlds – set in an imagined future and past respectively – resonate with East African audiences.