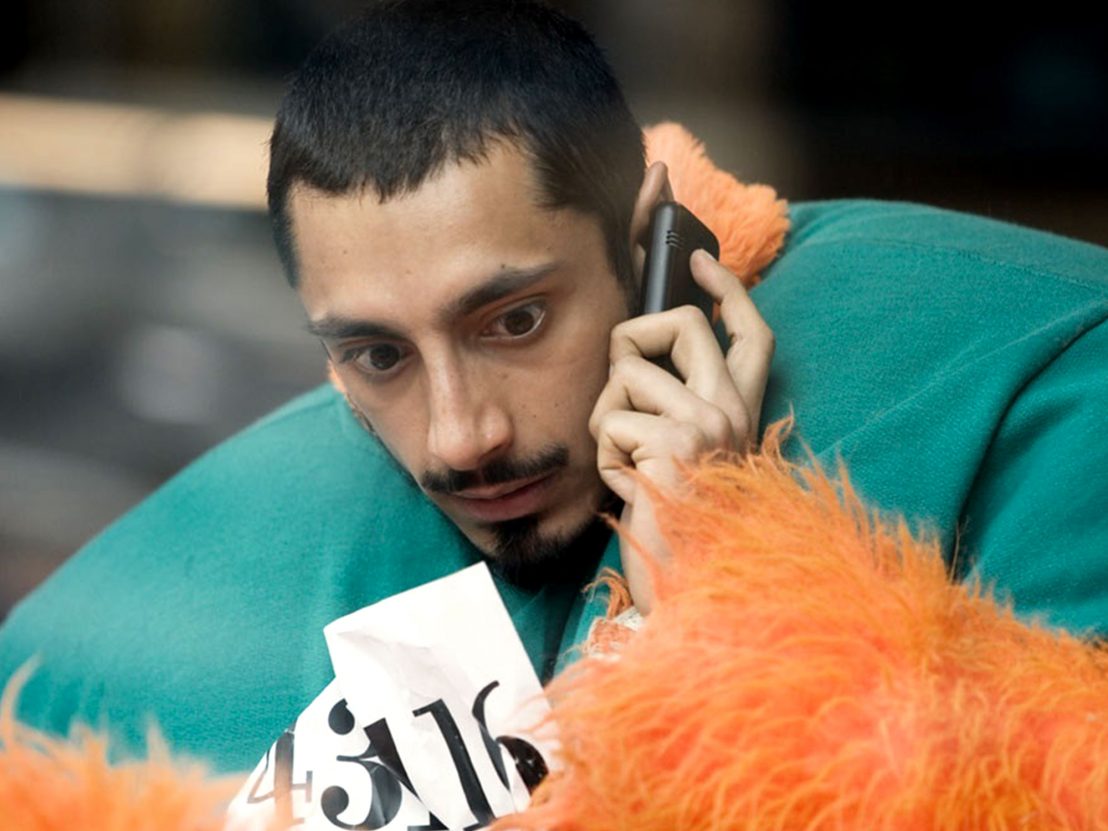 On paper, the premise of Four Lions – an inept terrorist cell in Sheffield plans a suicide attack – sounds like the opening of a tasteless joke. Most of the Islamic extremists depicted are punchline-producing caricatures who range from bumbling to brash: Faisal (Adeel Akhtar) buys bottles of bleach a dozen at a time while disguising himself as a bearded woman; Barry (Nigel Lindsay) itches to instigate the final jihad at whatever cost necessary; and Hassan (Arsher Ali), the “Mujahedeen making a scene”, prefaces a bomb hoax with a rap of his own invention.

But then there is Omar, played with characteristic poise by Riz Ahmed, who fancies himself as the leader of the group. Though he does make mistakes of his own – in his hands, a missile launch quite literally backfires – his relative competence sets him apart. While the others provide the belly laughs, Omar carries the film’s narrative and thematic weight on his shoulders. His stern presence acts as a reminder that, despite the many moments of black humour on display, the subject broached is a serious one.

Of course, Omar’s reasons for keeping a straight face differ from those of the viewer. For him, terrorism is not a taboo, but a duty. An early scene sees him give a motivational speech about what it means to be a “proper soldier”, to “hold a sword, touch the sky”. Elsewhere, he unleashes scathing tirades and pep talks peppered with anti-Western putdowns. Ahmed delivers such monologues with fire in his eyes – in these instances, Omar is presented as being in his element, overcome by both ambition and rage.

This anger does not always bubble to the surface. Omar often exchanges banter with a co-worker and shares warm moments with his wife and son. A blunt acting performance would separate the seemingly conflicting sides of his character, as if to ask, in the style of a tabloid headline, how a loving family man could harbour aspirations to kill. In Ahmed’s subtly unsettling interpretation, though, every personality trait becomes connected to his central mission. Personas are worn to suit a given occasion, but all are underpinned by the same steely resolve.

As a result, the behavioural shifts appear not only believable, but also callously considered. In this respect, they match the skill of Omar’s rhetoric. When speaking to his son, he adopts an air of paternal dignity, wrapping propaganda up in a story about The Lion King. Later, while tearing apart one of the group’s rash plans, he brings up the death of a relative. Ahmed utters the line with deliberation, striking a sombre tone that falls ambiguously between sincerity and deceit. Even the viewer is being played, left uncertain where the facade ends and truth begins.

The primary target of Omar’s emotional manipulation is his cousin, Waj (Kayvan Novak). A notoriously gormless theme park fan, Waj is drawn in by Omar’s suggestion that life is like being “stuck in the queue at Alton Towers”. Though the pair are close in age, Omar addresses Waj in a coaxing, craftily childlike manner, using popular culture references and fostering a sense of camaraderie in order to win him over. Omar repeatedly persuades Waj to participate in the planned attack, claiming that any seeds of doubt in his mind have been sown by the devil.

Only on two occasions does Omar’s determination waver. His mask first slips when group morale is at its lowest. After openly deriding Waj, he finds himself unable to tease his brother, who he usually delights in riling up. Passing him as he plays football with friends in a rainy park, Omar mutters that they look like “something rubbish”. His murmur is barely intelligible, his stare vacant. Here, Ahmed gives the impression of a man robbed of meaning, his surface scratched away to reveal not heroism, as he would hope, but vulnerability.

The other instance comes in the film’s closing scenes, with the group’s plan finally underway. Only when Waj holes himself up in a kebab shop, threatening to detonate his bomb, does Omar become struck by overdue guilt. His previously steadfast conviction fades into something closer to quiet resignation – for once, he is preoccupied by something other than his own jihad. In these final minutes, Ahmed’s facial expressions speak volumes: a heavy-lidded blink, a skyward flick of the eyes, a furrowing of the brow, a strained attempt at a smile.

Despite bearing all the hallmarks of a controversy-courting comedy, Four Lions ends with surprising pathos. Ahmed’s portrayal of Omar is instrumental in ensuring that this change in mood succeeds. His calculated charisma, maintained for most of the running time, illustrates how effectively individuals can be groomed into radicalisation. When his steely resolve breaks at the film’s denouement, overshadowed by guilt about his prior manipulations, it encourages viewers to recognise the tragedy not only of innocent victims, but also – more contentiously – of misguided perpetrators.