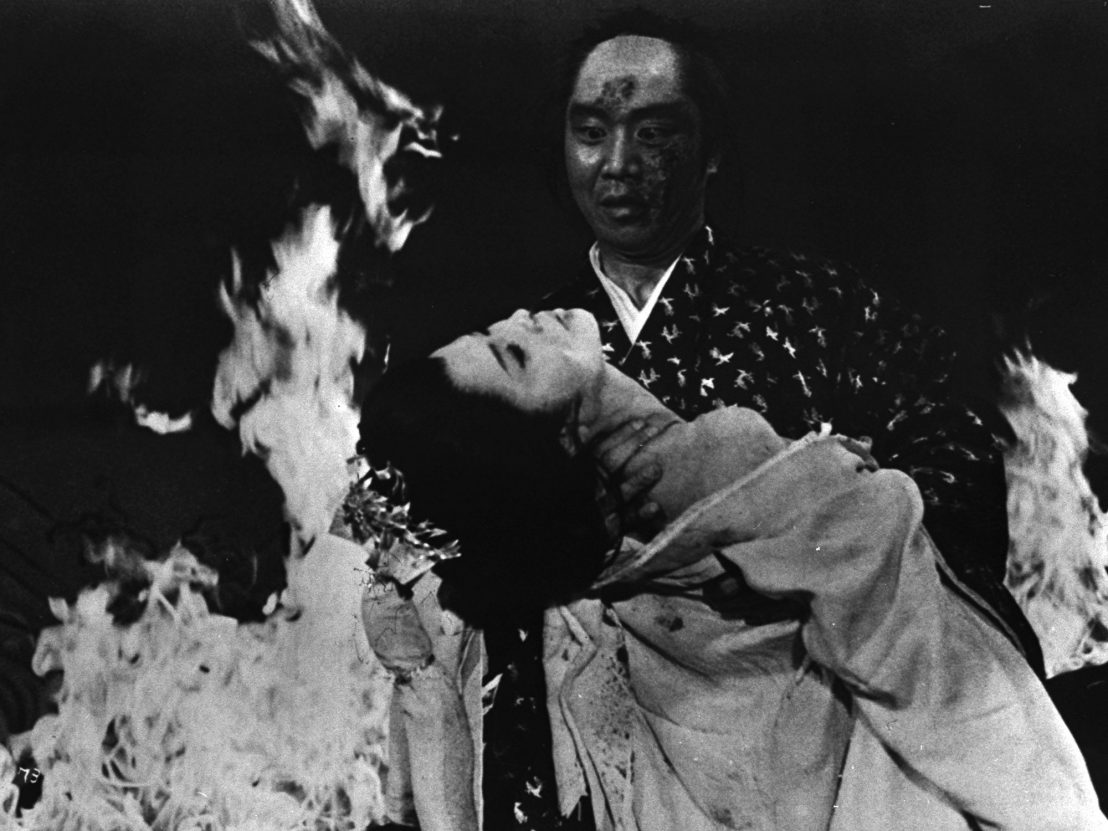 We know from the opening title sequence that this is going to be a deeply strange experience. Butoh founder Tatsumi Hijikata swings down from his niche in a display cabinet whose other compartments house various naked, bound people (including a man drinking blood from a tube attached to a woman). Hijikata then performs an angular gestural dance among hanging mirror panels, with first blood pouring, and then a chicken hanging, from his mouth.

This prologue, with its focus on perversion and deformity, is the spirit of ero guro made flesh, and sets the tone for what is to follow: three stories set in the Genroku era (the Golden Age of the Edo period) whose ostensible prosperity and pomp conceal, as the doctor Gentatsu (Teruo Yoshida) puts it at the film’s beginning and end, “depravity and a sickness of the soul”.

The first episode is also the most conventional, telling the story – familiar from so much Japanese cinema – of a fallen woman. While trying to rescue her profligate sister Kinu (Kei Kiyama) from debt, the good Oito (Masumi Tachibana) is seduced by the unscrupulous Hanji (Toyozo Yamamoto), who is soon pimping her out for his own profit. Hanji deceives and corrupts Oito, but Oito’s boundless, somewhat naïve love for Hanji elevates her even as it exposes his shortcomings. Yet even as Hanji repents too late, we are left with the paradoxical impression that if Oito had shared just a little of Hanji’s dishonour and cynicism, she might not have ended up a martyr to her own morality.

The second episode concerns Ochise (Mitsuko Aoi), a wealthy merchant’s daughter whose ‘shameful secrets’ are a kink for lowly, deformed lovers, and for S&M. She is abetted in this by her besotted servant Chokichi (Akira Ishihama), who lets her play ‘horsey’ with him, and who hires dwarves and men with ‘imperfect faces’ to ravish her. It emerges that Ochise’s perversion goes back to her teenage years, when she was abducted, bound and repeatedly raped by a man with severe burn scars on his face.

The third and final part, linked to the others by the presence of Gentatsu, is perhaps even more uncomfortable for the viewer. For it concerns a Lord (Asao Koike) who arranges spectacles of grotesque sadism for his own viewing pleasure. These include dressing maidservants in red to be gored by angry bulls (whose horns are aflame) while he gleefully watches with his court, or, like the eponymous villain form 1964’s Goldfinger, covering his concubine Okon (Yujie Kagawa) – who has betrayed him with a dog – entirely in gilt paint and placing her in a reflective hall of mirrors that displays her unnaturally hued, lead-poisoned body from all angles.

The Lord’s eye is drawn to servant Mitsu (Miki Obana), whose aroused response to his acts of cruelty marks her as a perfect match for him. “I’ve been looking for a girl just like you,” he says. But the ardour of his desire, more perverted than even he realises, will eventually bring his whole house down in flames – even if the Lord, with the sort of wayward spectatorship that the viewer inevitably in part shares, is all too happy to “watch the world burn”.

Its product is us, and its symptom is our desire to watch films like this. Many viewers can probably resist Ishii’s deviant blend of kinbaku, paraphilia, monstrosity and surrealism – but those who cannot are in for a heady treat that casts them too, like the Lord’s only surviving heir, as falling somewhere between human and beast.