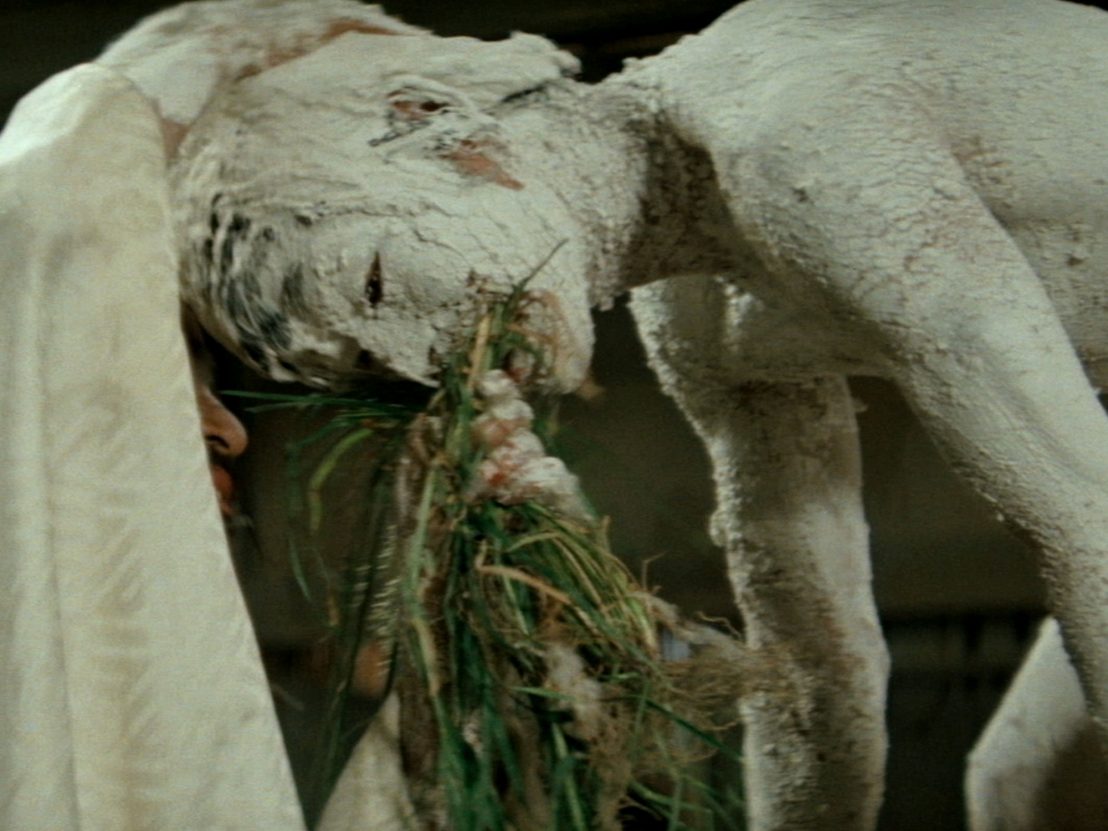 “This story begins in a grey room,” intones our protagonist Hirosuke Hitomu (Teruo Yoshida). It is 1925, and Hirosuke, as disoriented as we are, finds himself in a cell otherwise filled with babbling, half-naked women, one of whom chases him with a knife and, laughing, stabs him repeatedly in the chest. This is an institution for the insane, although Hirosuke – a Tokyo medical student – has no memory of how he came to be here.

He is, though, still very much alive, as the woman was armed with a false, retracting blade – a sign of the disguise, deceit and double dealing to come, in a film where nobody and nothing are what they at first seem. “Have I really gone insane?”, Hirosuke wonders, mesmerised by a strangely familiar lullaby that he can hear being sung outside the window of his cell, and by some even stranger impressionistic memories of a seaside cliff and monstrous figures.

Hirosuke does not stay in the asylum for long, and is soon traveling incognito to the Sea of Japan to solve the riddle of that lullaby, as well as that of his own identity and provenance. Yet no matter where Hirosuke goes in Horrors of Malformed Men (full title The Collected Tales of Edogawa Rampo: Horrors of Malformed Men), he finds a mad house.

Edogawa Rampo is the nom de plume of writer Taro Hirai, and involves a Japanglish play on the author Edgar Allen Poe, one of the principal inspirations for Edogawa’s pioneering work in Japanese mystery fiction. Edogawa’s most famous character (and Japanese literature’s first recurring detective) was Kogoro Akechi, a Sherlock Holmes-esque sleuth who settled into a series of novels called ‘The Boy Detectives Club’, aimed primarily at younger readers, but who first appeared in the 1925 story ‘The Case of the Murder on D Hill’. He subsequently featured in many of Edogawa’s pre-war, decidedly more adult stories which bristle with the surreal erotic grotesquery of the genre known (in another Japanglish term) as ero guro nansensu.

The fugitive Hirosuke is on a twisty path to the truth, leading first to a travelling circus, and then to the noble Komoda household which he infiltrates by impersonating its recently deceased head Genzaburo (for whom, mysteriously, he is a dead ringer), and finally to the private island owned by Genzaburo’s estranged father Jogoro (Tatsumi Hijikata). There, all the domestic intrigue and depravity that has been building will assume its most degenerate and shockingly surreal form.

As played by Tatsumi Hijikata, founder of the Japanese method of avant-garde dance known as butoh, Jogoro cuts a striking figure, all flowing hair, sinuous, snaky movements and webbed fingers. That digital deformity, a birth defect, is the source of all Jogoro’s disturbance, and the reason behind his desire to realise on his island a grand, utterly mad vision of an environment where everyone is hideously disfigured. An embittered sadist, driven by his sense of betrayal, Jogoro is one of the most straightforwardly insane villains ever to have appeared in cinema, creating a bizarre world in his own damaged, demented image, while also – anachronistically – embodying the trauma (and mutations) of post-Hiroshima, post-Nagasaki Japan.

Jogoro is also a figure for the author/director. His 30-year-long wish to create, through unorthodox surgery, hybrid humans and “a statue of a horse-headed god… to be crowned with a living horse’s head… us[ing] living human flesh to build it,” is matched by the way Ishii stitches together several Edogawa stories into one teetering, ungainly monster. Jogoro’s own storyline is inspired mostly by Edogawa’s novel ‘Strange Tale of Panorama Island’, as well as HG Wells’ ‘The Island of Dr Moreau’, but interlaced into Hirosuke’s adventures are elements from Edogawa’s short stories ‘The Stalker in the Attic’ and ‘The Human Chair’, with supersleuth Kogoro Akechi (Minoru Oki) himself making a surprise eleventh-hour appearance to tie all these disparate strands together through logical exposition.

No amount of sharp detective work, though, will prepare viewers for the exuberant irrationality in the climactic explosion of forbidden love, as the film’s incestuously conjoined parts are finally separated again and Hirosuke, ever seeking to escape a legacy of madness, once more loses his head. The results are a deliriously unhinged glimpse into the disintegration of Japan’s dynastic structures and patriarchal dreams.

Horrors of Malformed Men is released in a brand new 2K restoration presented on High Definition Blu-ray, from Arrow on 17 September.