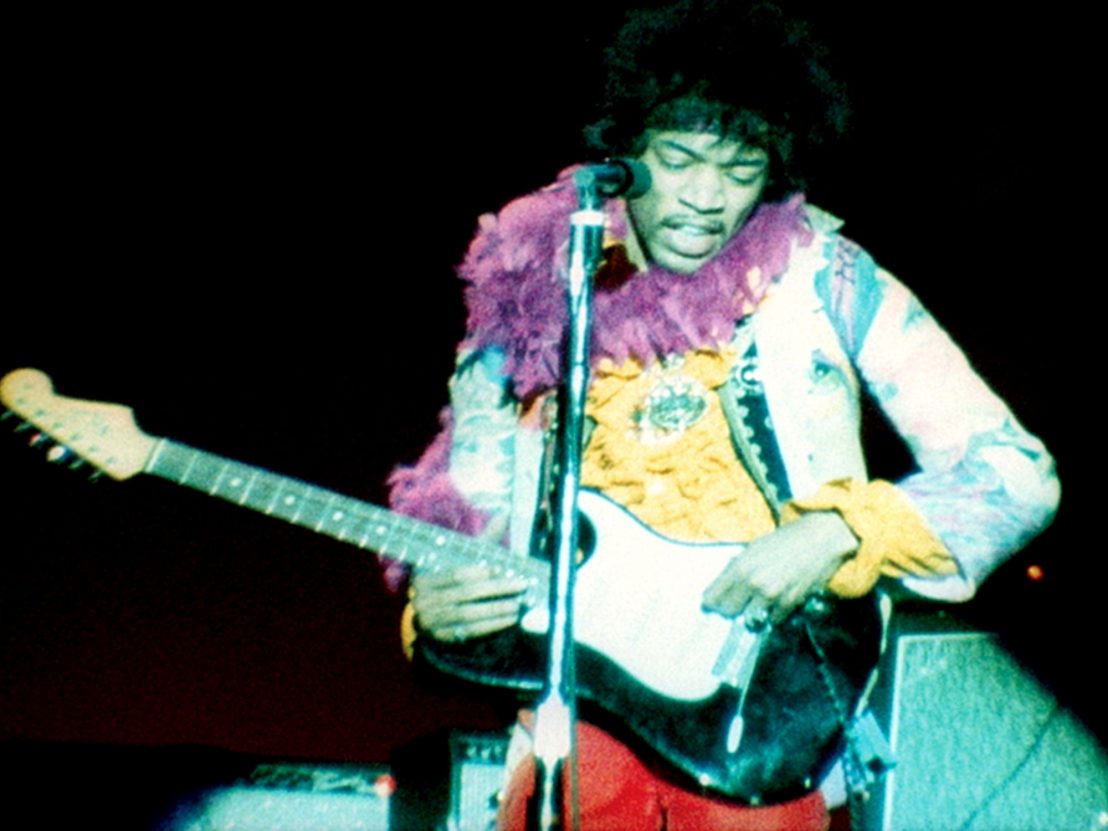 Concert documentaries are inevitably historical artifacts. By capturing the thrilling spectacle of a live performance, they seek to keep and contain specific, fleeting moments in time. They preserve places and faces but also that revelatory, spellbinding quality that is released then evaporates, only ever to be experienced in this way at this moment by a select number of people, united for a matter of hours and minutes.

Of course, the advent of YouTube may have diminished the element of surprise once inherent in concertgoing and thus the necessity of the concert documentary itself. After all, once an artist’s tour finally makes its way into your city, there’s a definite chance you and everyone else in the audience may have already seen the show in its entirety on your phone. But the concert doc has never fully receded and, indeed, some of the sub-genre’s most dazzling pinnacles remain pinnacles of documentary filmmaking – from Albert and David Maysles’ Gimme Shelter and Martin Scorsese’s The Last Waltz to Jonathan Demme’s Stop Making Sense and Alek Keshishian’s Madonna: Truth or Dare to Wim Wenders’ Buena Vista Social Club and Michel Gondry’s Dave Chappelle’s Block Party.

It’s difficult to imagine any of these films existing without the awe-inspiring influence of Monterey Pop, DA Pennebaker’s 1968 documentary chronicle of the Monterey International Pop Musical Festival. The three-day, pre-Woodstock music event, held at California’s Monterey County Fairgrounds in June 1967 augmented the rising, short-lived stardom of Jimi Hendrix and Janis Joplin and brought together acts as disparate as Canned Heat, Eric Burdon & The Animals, Hugh Masekala, Otis Redding, and The Mamas & the Papas, whose notorious lead singer John Phillips planned the festival and commissioned Pennebaker’s film along with record man and fellow organiser Lou Adler.

Pennebaker’s essential landmark of Direct Cinema is back in US theatres this month to commemorate the 50th anniversary of the actual festival, arriving on screens in a pristine 4K restoration of the director’s 35mm print, which was enlarged from its original 16mm for the initial theatrical release. At less than 80 minutes, Monterey Pop is a breezy, compact account of an invaluable juncture in music history. It may not be as mammoth in scope as Michael Wadleigh’s three hour-plus Woodstock, which employed then-upstarts Martin Scorsese and Thelma Schoonmaker as editors and assistant directors, but in no way is it a minor achievement.

Nor has it aged into an empty nostalgia trip, despite the fact that so many of its breathtaking performance scenes and observational, atmospheric sequences have been ripped and edited into plenty of other, lesser documentaries. These films, typically bio-docs of relevant figures from the era, look to include nothing more than the opening, epoch-encapsulating sight of flamboyantly-dressed hippies spinning in the grass as Scott McKenzie’s ‘San Francisco (Be Sure to Wear Flowers in Your Hair)’ sparkles over the soundtrack.

Despite such banal employments, Monterey Pop has only grown more fascinating in the decades since its debut, if only because Pennebaker, who helmed the experimental Bob Dylan documentary Dont Look Back directly prior to this, clearly sees these flower children as something deeper but also more ordinary than eccentric archetypes of a generation. Pennebaker, his five additional cinematographers (including Albert Maysles), and editor Nina Schulman incorporate so many of the festival’s young attendees into their final product, finding them at the actual shows as well as the scattered campgrounds surrounding the main stage.

Spliced with the concert footage are impressionistic montages that unfold like moving scrapbooks, comprised of close-ups of what must amount to hundreds of faces and figures, most of them absorbed within the romantically communal groove of temporary festival life or else intriguingly standing apart. Unsuspecting lovers lock lips in private corners. Onlookers flaunt their colourful, patterned duds. In one concise yet chilling shot, a gang of Hells Angels sit in a line of folding chairs close to the stage, eerily prefiguring the events that would transpire just two years later at the Rolling Stones’ fatal Altamont concert, cemented in movie history in the Maysles’ Gimme Shelter. 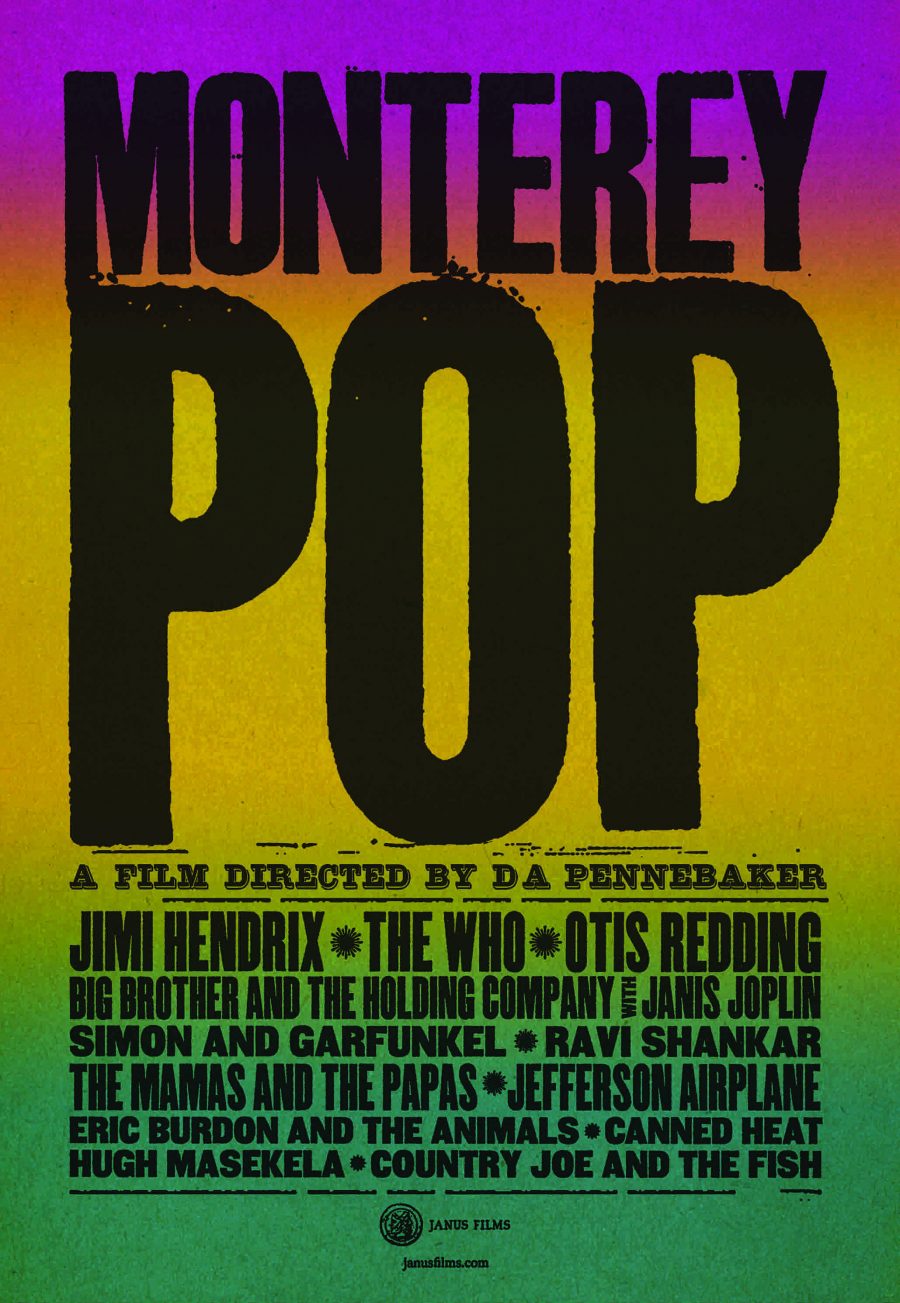 These insertions, whose shots flit by in seconds are distinguished by an on-the-fly compositional style, never impart the feeling of a sociologist quizzically observing a counterculture from behind a glass wall but of fellow spectators attempting to immerse themselves within a sensorily overwhelming and often warmly inviting environment. Then again, it would be deceptive to say that the wandering cameras of Pennebaker and his cohorts are invisible instruments when the people they photograph frequently respond to the filmmakers in their midst, locking eyes with the lens and reacting with a grin, grimace, or something in between.

These to-camera acknowledgments might signal amateurishness in any other project, but here they express a basic truth about the very purpose of documentary filmmaking, which at its essence is intended to capture and thus confront real life as lived. And by capturing so many subjects from a multiplicity of perspectives, Monterey Pop is ultimately a democratic document, mirrored by the actual festival.

Not that every act is afforded the same amount of time in the final film: turtle-necked Simon & Garfunkel and their mellow rendition of ‘The 59th Street Bride Song (Feelin’ Groovy)’ are given far less screen time than, say, Jefferson Airplane, whose kohl-eyed lead singer Grace Slick fills the screen during magnetic versions of ‘High Flyin’ Bird’ and ‘Today’, so much so that they inspired Jean-Luc Godard to embark on One AM, an unfinished cinematic collaboration with the band. Even so, Pennebaker communicates the humbling ethos of a music festival, in which performers both established and emerging are all granted the same stage and spotlight with which to share their gifts.

This spirit is perhaps most electrifyingly evoked in two of the film’s most definitive sequences, the breakthrough performances of Hendrix and Joplin, whose raw, unrehearsed performative grandeur is elevated on film by Pennebaker’s acute eye for detail, which would go on to generate one of the most successful and productive careers in nonfiction film. Hendrix’s literally explosive take on ‘Wild Thing’ – in which the rock god lights his electric guitar on fire, bristles at the minuscule results, and then proceeds to destroy said instrument – is enshrined in the minds of many die-hard music fans, but it’s made all the more visceral by the numerous, up-close angles that record Hendrix grinding around the stage, running through position after position with which to, ahem, play his guitar.

Joplin’s nervy, star-making interpretation of ‘Ball ’n Chain’, which would get her and Big Brother and The Holding Company signed by Clive Davis and Columbia Records that weekend, is perhaps even more storied for providing a rounded, multifaceted experience. Pennebaker and Schulman fill the performance with so many grace notes, including the deeply funny shots of Cass Elliot sitting slack-jawed in the audience as Joplin’s cavernous growl fills the space at full volume. Just as vivid (and poignant) are the shots of Joplin’s heels getting stuck in the bell bottoms of her stretchy gold lamé pantsuit and the naked, unforgiving close-ups of Joplin’s pock-marked face, stretching and stifling with each unlikely note that Joplin nonetheless hits or, more fittingly, wrecks.

Pennebaker’s film hinges on these details, which demythologise legends both late and living and veer away from wide-eyed hagiography by seeing everything and everyone with equal clarity. Pennebaker and company don’t just capture The Who, also on the precipice of American fame, as they rage against the machine during their anarchic, derisive delivery of ‘My Generation’, but Adler and the stagehands who hurriedly rush on stage to put this destruction to an end. Otis Redding makes rousing appeals to the audience during his infectious set, which wouldn’t be even nearly as joy-inducing to witness without the images of the onlookers responding with glee. Looking back at the moments five decades on, historical performances become urgent, lived-in experiences, which is the most any documentary, concert or otherwise, could aspire to.

Monterey Pop set this mode and it ends in the most rewarding way imaginable: Ravi Shankar’s full performance of ‘Dhun’, the surprise power of which is cleverly set up in a perfectly-edited preceding sequence. It’s the final day of the festival. The sky is overcast, the ground is mucky, and a few are already hitching rides back into the city. The sizeable crowd that has stayed behind to watch this foreign, scarcely-known instrumentalist is bleary-eyed and blank-faced. And yet Shankar’s presentation manages to work some kind of palpable magic on the increasingly rapt audience, culminating with sitar strumming that seems to move faster than the speed of its own sound. When the performance ends, every single viewer leaps to their feet in ecstatic applause as a beaming Shankar tosses a handful of petals over their heads.

In the very last shot, Pennebaker and Schulman cut to footage from a cameraman embedded within the audience as he feverishly scans the throng of new converts. In the background, we briefly spot another man grabbing ahold of his handheld camera and quickly pointing it at the stage. He, too, wants to commit this moment to memory.

Monterey Pop opens in New York on 14 June, followed by Los Angeles and across the US on 16 June. For more info visit janusfilms.com