Mike Flanagan’s latest Netflix outing, set in a small island community, is his most ambitious and personal work to date. 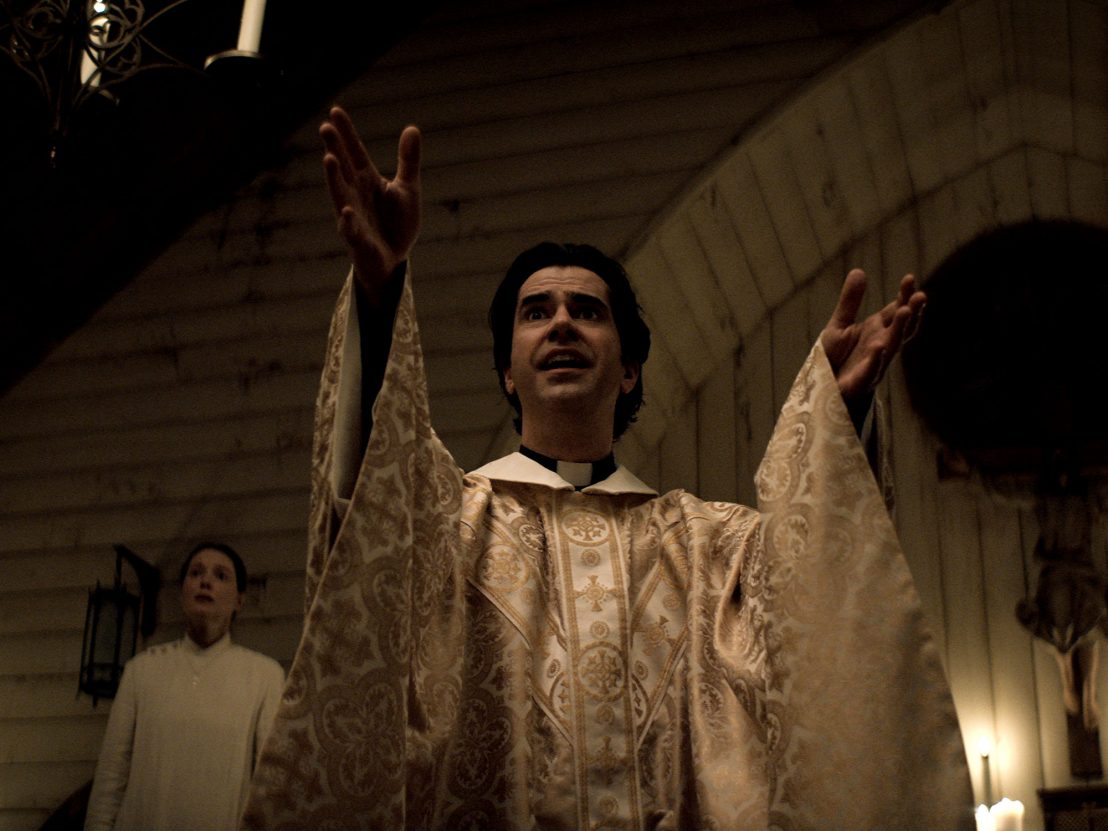 As a filmmaker, Mike Flanagan’s ambition cannot be faulted. The Haunting of Hill House, probably his greatest work to date, managed to be a scary and moving adaptation of the entire oeuvre of Shirley Jackson. His follow-up Doctor Sleep was by no means perfect, but to create a cohesive sequel to both Stephen King’s and Stanley Kubrick’s The Shining was no mean feat. So even if The Haunting of Bly Manor descended into saccharine nonsense, the optimistic anticipation of Midnight Mass is justified.

Flanagan and his Netflix overlords have requested that journalists disclose as little as plot as possible. Suffice it to say Midnight Mass takes place on Crockett Island, 30 miles from the mainland, connected by an infrequent ferry. The community, “once hundreds, now dozens,” sees a prodigal son return in the form Riley Flynn (Zach Gilford) after spending a few years in prison following a drunken incident.

Also recently returned to Crockett is Erin (Kate Siegel), a pregnant teacher at the local school, who has escaped drugs and domestic abuse to start anew. When the ageing Monsignor proves too ill following a pilgrimage to lead the island’s modest congregation, Father Paul (Hamish Linklater) also arrives to take his place, aided by the devout local busybody Bev Keane (Samantha Sloyan).

Midnight Mass is clearly an intensely personal work for Flanagan; at times he seems to be confessing his greatest fears and self-loathing directly down the lens. It has been many years in the making, with the physical Midnight Mass texts appearing in both Hush and Gerald’s Game. It could be argued that it is just as much a tribute to the literary legacy of Stephen King as his previous works were to Jackson and James – but to even allude to the specific texts it draws from would spoil some of the fun. 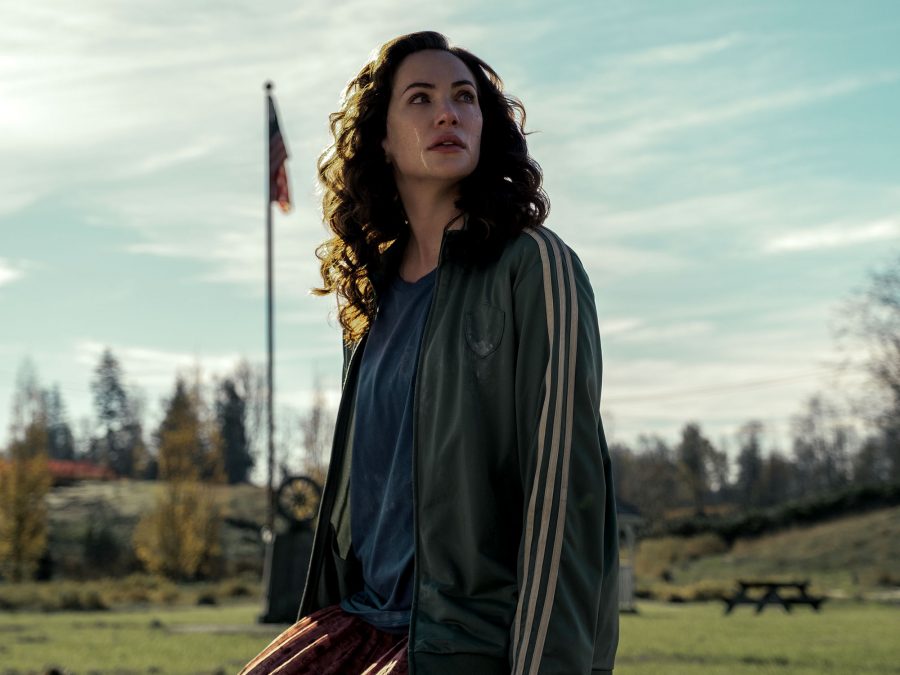 The majority of the scenes are duologues, with various pairings discussing their guilt, their faith, and their hope for redemption. Whether or not you engage with Midnight Mass may come down to whether you enjoy characters, for no particular reason, staring into the middle distance and giving long, uninterrupted reflections about the unjust treatment of 19th-century Hungarian doctor Ignaz Semmelweis or the fast-tracking of Muslim police officers post 9/11.

While that may sound heavy-handed, the total lack of subtext is what makes Midnight Mass soar. Flanagan has such confidence in his actors’ ability to sell their soliloquies that the cumulative effect is mesmerising. The antepenultimate episode, where you might expect the action to be speeding towards a grand finale, is mostly just two actors sitting on fold-out chairs in an empty hall. Nothing much happens other than an intense discussion around the nature of remorse, but Flanagan has invested so much in the pair that it is completely compelling.

Midnight Mass has fewer of the gimmicks that Flanagan used to varying degrees of success in his previous Netflix outings. Instead, he introduces a familiar mythology and makes it clear by the halfway point of the series where this is all headed. As a horror director, Flanagan has undeniable technical prowess, and Midnight Mass shows his flair for using the power of suggestion to build suspense. He keeps macabre figures to the fringes and utilises jump scares and grotesque violence infrequently enough to give them their full power. Above all, Midnight Mass, like The Haunting of Hill House, is a human story; more sad than it is scary and all the richer for it. 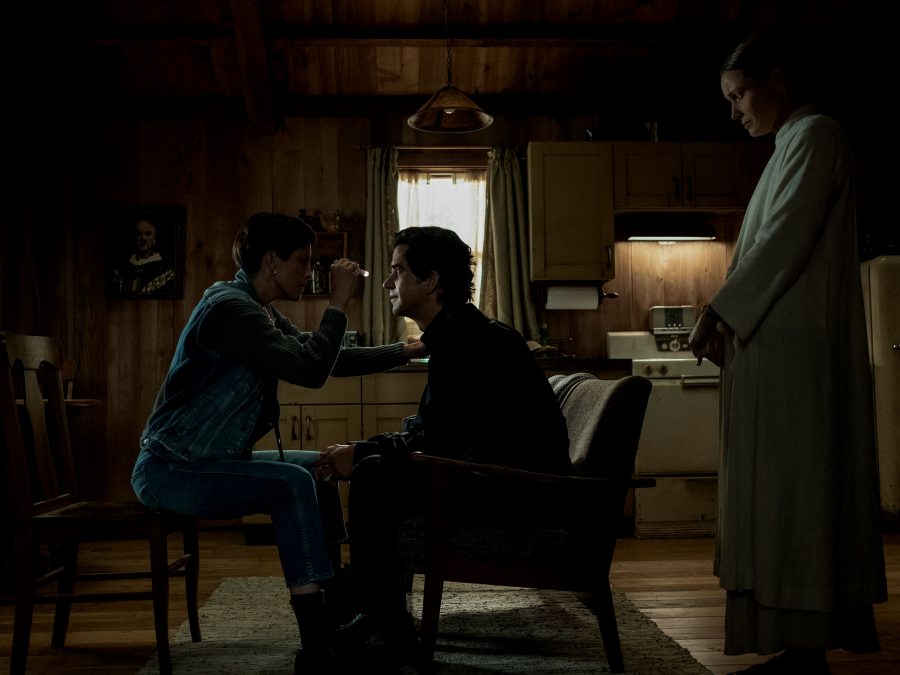 It might also be Flanagan’s cruellest work to date. The fates of many of these characters are unrelentingly gruesome. At one point they almost break the fourth wall to beg him, “Please, God have mercy, our sorrow is too much – it is too much.” He punctuates this with cuts to credits after some of the worst moments, one in particular paying direct homage to Rose Glass’ finest flourish in Saint Maud. There are dual focusses, addiction being at the fore for the first half of the season and religious zealotry taking over after that. Flanagan tackles both with aplomb but has his most interesting ideas with the latter.

He manages to have fun with the most macabre symbolism of Catholicism while asking pertinent questions around the confirmation bias of fanaticism and the banality of mob violence. When it comes, the violence is often disarmingly matter-of-fact. For all that it can be difficult to criticise a writer/director baring their soul the way Flanagan does here, it’s a joy to be able to praise it. For those who grew up with complicated relationships with faith, community and addiction (and sought comfort in Stephen King) Midnight Mass will come as a welcome tonic. Flanagan has created something difficult, devastating and truly wonderful. 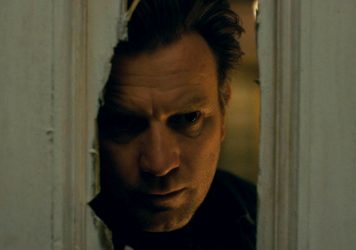 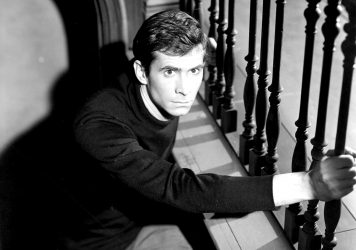