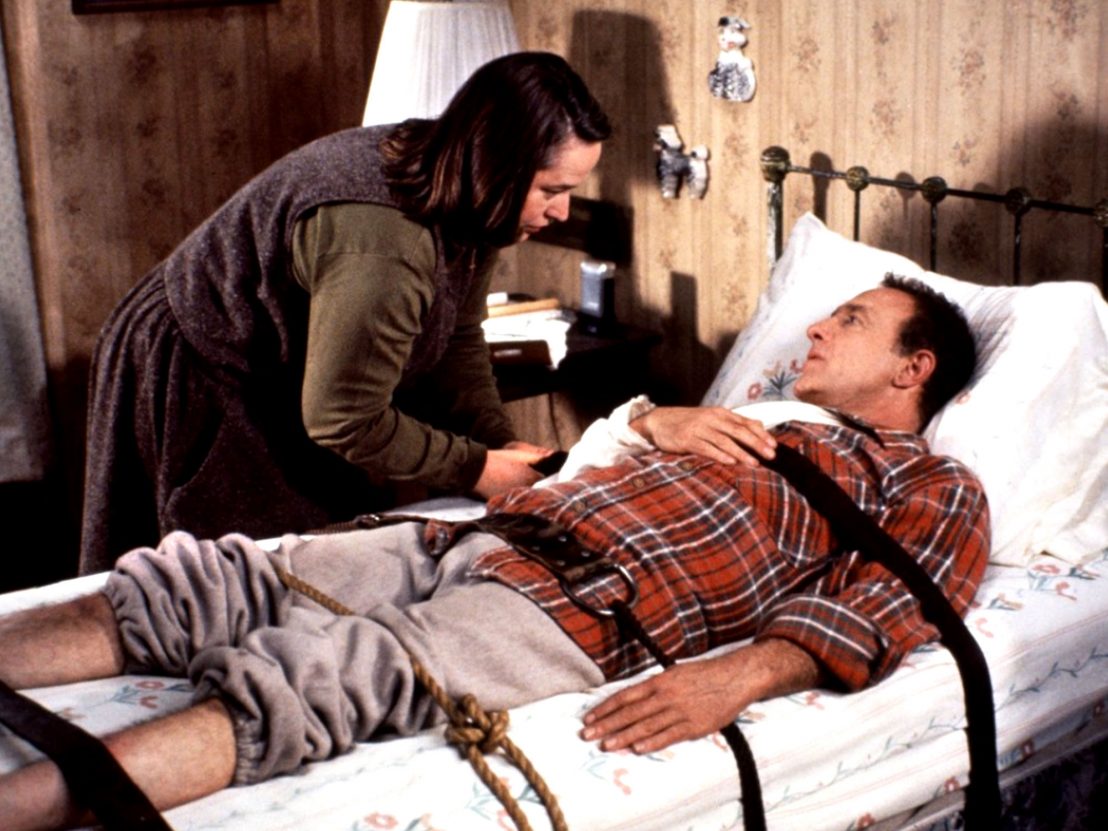 With 54 novels and almost 200 short stories to his name, King perhaps rivals only Shakespeare and Dickens as the most adapted author in history. This year alone, we have Andy Muschietti’s IT, Nikolaj Arcel’s The Dark Tower, AT&T’s serialised version of Mr Mercedes, a Netflix movie version of Gerald’s Game (perhaps the most challenging novel to adapt given its static setting) and you can probably count Stranger Things in that list too, as Eleven and co simply wouldn’t exist without the horror maestro’s preceding work. Here are 10 of our favourite Stephen King adaptations from TV and film.

You know the 1990 miniseries and now the 2017 movie, but you’ll probably be unfamiliar with Woh, a Hindi-language adaptation of ‘IT’ from 1998. Woh combated the time issue by telling the story across 52 (!) episodes, leaving ample room to cover the text sufficiently, and it’s fascinating to see how things have been altered for an Indian audience. Notable changes include swapping the storm drain for a swimming pool in George’s death scene, and changing Pennywise’s name to The Joker (Batman copyright issues are another story…)

The infamous hobbling scene was something of a red line for potential stars and directors, with George Roy Hill, Warren Beatty and Bette Midler turning the movie down because of it. Interestingly, the book is far gorier: once writer Paul Sheldon (James Caan) winds up at the mercy of deranged nurse Annie (Kathy Bates) following a car crash, she not only breaks his leg but cuts it clean off. There’s also a particularly gruesome scene with a policeman getting caught up in a lawnmower, which director Rob Reiner filmed but thought it too comical for audiences.

Even screenwriter Bill Phillips thought this premise was a joke when it was pitched to him. An absurd idea fashioned into a brilliant movie, Christine tells the tale of bullied nerd Arnie Cunningham (Keith Gordon) who purchases a wrecked Plymouth Fury with a mind of its own. The taglines were as ridiculous as the plot – ‘Body by Plymouth. Soul by Satan’ – but by 1983 King had become a box office brand, and his popularity was such that the film went into production before the book had even been published.

Rarely has an adaptation of a novel been so despised by its original author. King and Kubrick notoriously loathed each other, with King accusing the director of stripping his source material of its charm and his characters of depth. In King’s eyes, Shelley Duvall’s Wendy was, “one of the most misogynistic characters ever put on film. She’s basically just there to scream and be stupid.” Nonetheless, it remains an iconic and much-loved horror movie, and is a perfect example of how a book and its cinematic counterpart can be equally brilliant for dramatically different reasons.

Much of King’s work relies on making the familiar absolutely terrifying, and after waging war on the nuclear family and the suburbs, King threw the family dog into the mix. Cujo the film opts for a different ending to the book, with (spoiler alert) the son surviving, whereas in the novel he doesn’t. King was apparently happy with the change, aware that what works for an audience on the page might not perform similarly onscreen. Despite mixed reviews, King cites this as one of his favourite adaptations to date.

You’d be forgiven for not realising that this is a King flick: his brand is so synonymous with horror that it’s easy to forget he has a string of heartfelt stories under his belt. Despite receiving a lukewarm response upon its theatrical release, this tale of friendship in the US prison system found its audience on home video, and has gradually been elevated to the status of modern classic. In 2015, the US Library of Congress selected the film for preservation, finding it “culturally, historically or aesthetically significant.” Not bad going for a former novella.

With Darabont again directing, the similarities between this and Shawshank are apparent from the get-go: another grim prison, another inmate banged up for a crime he didn’t commit. Set on death row in 1935 and starring Tom Hanks alongside Michael Clarke Duncan, The Green Mile was nominated for four Oscars, reinforcing the killer King-Darabont combination and further toying with King’s reputation for being nothing but a horror writer. That’s not to say there’s nothing to fear here – the electric chair scene still haunts us to this day.

Not a straightforward adaptation, Creepshow is an anthology film composed of five vignettes, two of which were initially short stories. The results are patchy in places but lots of fun, paying fond homage to the 1950s EC Comics with its humour and periodic descents into melodrama. Highlights include ‘The Lonesome Death of Jordy Verill’, starring King himself, and Ted Danson and Leslie Nielsen’s performances in the highly disturbing ‘Something To Tide You Over’, made all the more sinister by the casting of comic actors. As with Stranger Things, it’s the sense of nostalgia and a clear affection for the source material that make it work.

King’s book about a time traveller attempting to prevent the Kennedy assassination required considerable research: King claimed the process was “like breaking in a new pair of shoes.” The 2016 Hulu adaptation is surprisingly faithful, and James Franco makes a great Jake. The series deserves kudos for its meticulous attention to detail, and quirky spin on the time travel subgenre – here, the past doesn’t like to be changed, and obstacles crop up to sabotage Jake’s mission, from falling chandeliers to a cockroach horde. It is a King work, after all.

The adaptation that started it all… King’s tale of tormented teenager Carrie (Sissy Spacek) enacting telekinetic revenge on her bullies cemented him firmly on the map as a writer Hollywood should watch. Disappointingly, the 2015 remake depicted a Carrie much more in control of her powers, whereas in the 1976 original she is simply chaotic. The difference is stark, with Carrie 2.0 effectively becoming the villain of the piece.