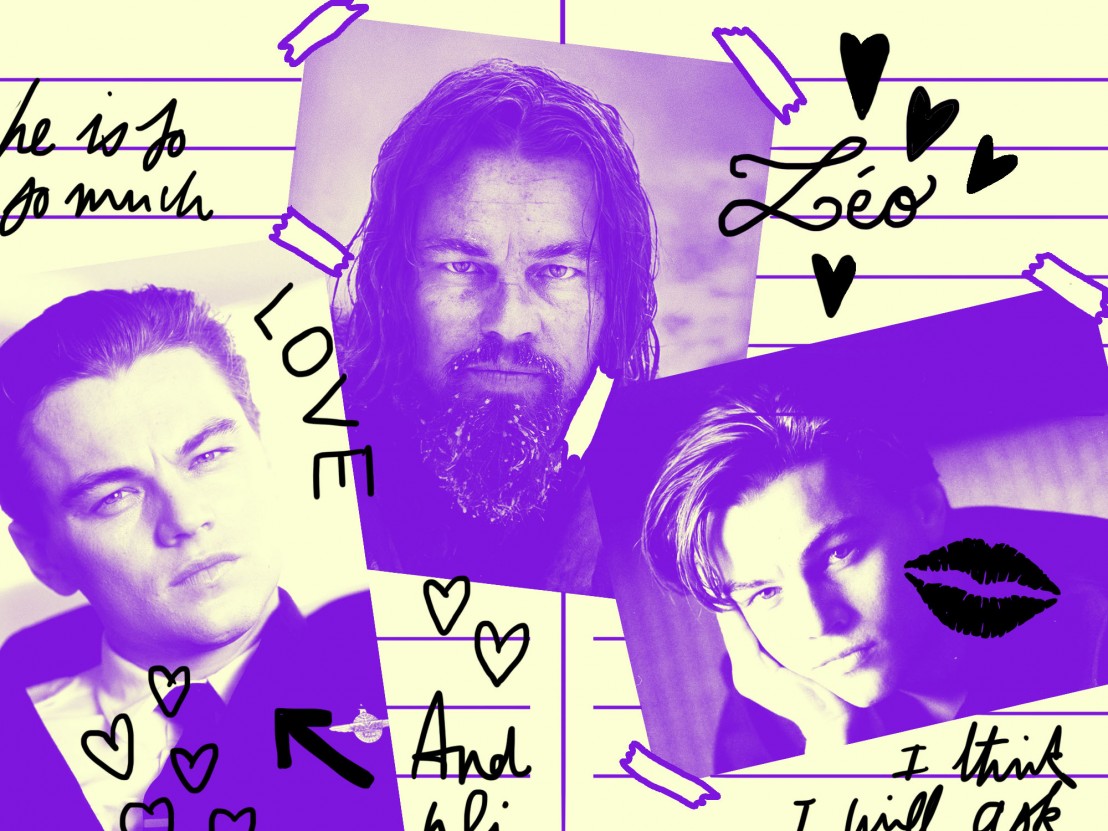 Last night was the London premiere of Titanic in Leicester Square. I was so excited that you were coming to my town. Ever since Romeo + Juliet, your sensitivity has overwhelmed me like an apothecary’s potion. You tend to play wounded people. I cry for them and worship you for bringing them to life with power and nuance. I feel like your characters are real and I’m really connected to this slip of a man with dramatic eyebrows and flawlessly serene features. When I have sleepovers with my friends, I’m allowed to rent videos from Blockbuster and always campaign for your films. So far I’ve seen: The Basketball Diaries, This Boy’s Life, What’s Eating Gilbert Grape and The Quick and the Dead. You’re so emotional in your performances and especially good at crying. I’m emotional, too. I wish you could know me like I know you.

My plan was to come down to the Titanic premiere and see you. Perhaps you’d notice me as you walked past, our eyes would meet across the red carpet, you’d come over and I’d conjure up something so powerful to say that our lives would be forever interlaced. I know that makes me sound crazy, like Annie in Stephen King’s ‘Misery’ (I read a lot. Do you?) I didn’t exactly believe that any of this would happen but the mere thought of it brought tears of joy to my eyes. But then my mum wouldn’t let me go!!! She said I was too young – as if age means anything to feelings. I cried for hours, mourning our love from beneath my Romeo + Juliet poster. Maybe our paths will cross again some day.

All my love,
Sophie xoxoxoxo

It’s great that Martin Scorsese has followed millions of admiring fans and fallen for your charms. I’m excited to see your career progress with such discernment. You’re never over-exposed. You choose a peach role, give it your all, then move on, but not with too much speed. It’s clear that you’re enjoying the perks of an A-list lifestyle *wink wink*.

For a while I continued to loyally watch everything you were in. I watched Celebrity and was disappointed to find that you had such a small part. I don’t quite know why you stopped being the most exciting aspect of my cinema-going experience, but I do believe that the heart must go on. As you are a symbol of a quality films, I’m keeping up, and with each performance am flushed with pride. You’re like a plucky kitten that has grown into a big cat with glossy capable muscles – for drama and comedy! The Beach, The Aviator and The Departed are all under my belt. But I’m saving what I hope to be the best till last: Catch Me If You Can.

Steven Spielberg’s rollicking caper looks to be the perfect showcase for your twinkly-eyed, silver-tongued, light-fingered, Romeo-on-the-run routine. You’re a 28-year-old playing a high-school student playing a 28-year-old – a helix of impersonation that suits you to a tee. Right now, you’re at this fascinating juncture between teen heartthrob and man of the world. It’s the perfect time to play a con artist whose job is made easy by the fact that everyone he meets, after he starts role-playing, wants a piece of him. I bet you enjoyed that role and relished the fact that we have no way of knowing where Frank ends and you begin.

You remain a consistently magnetic performer. You never phone it in. Directors who are lucky enough to have you as their leading man must watch characters coming alive in ways that they never dared to dream. But, if I may be so bold, are you playing it safe, prestige art-house style? Just as you have a type when it comes to romance (young, blonde, a model) you have a type when it comes to directors (old, male, a name). No doubt you will find it impudent that I am wading into your personal affairs like this!

But if you’re still reading, Leo – my dear, darling, virtuoso Leonardo – I implore you, take a chance! Your name alone could get a film made. Scorsese doesn’t need you, Clint Eastwood doesn’t need you, Baz Lurhmann doesn’t need you, Alejandro González Iñárritu doesn’t need you. And shall I tell you what you don’t need? A shiny gold statuette. You don’t need to eat a fucking bison heart for them, babe. Eat one to please yourself, by all means, but not for peer approval. You are an exceptional talent and history will see you that way. Fuck trinkets when you already have the power to draw millions of eyes to interesting, marginalised, profound material.

You don’t play losers anymore. You play rugged anti-heroes that generally suffer from a position of privilege, riches and swaggering capitalist alpha male values. J Edgar wielded great power, ditto Calvin Candie, Jay Gatsby and naturally, your wolf of Wall Street. Hugo Glass starts The Revenant as a vulnerable figure but his arc is basically the emergence of a caricature of vengeance-obsessed masculinity. The last time you took a chance on a complex nobody of a character for an unknown director was in 2001 for Don’s Plum, a film you have capably sought to bury. I tracked it down, Leo. The writer of said film, Dale Wheatley, is on a mission to ‘free Don’s Plum’. I found that plum and I tasted it. The film is a failure but an interesting one.

I wonder where you might go from here. At 41 you’re essentially in your prime. Decades of rewarding creative work and discovery lay ahead, if you want it. Please, Leo, take a risk on a smaller, more personal films; collaborate with unproven but promising talent. Play weird underdogs and imbue them with a vitality that is your own. It’s your true gift.