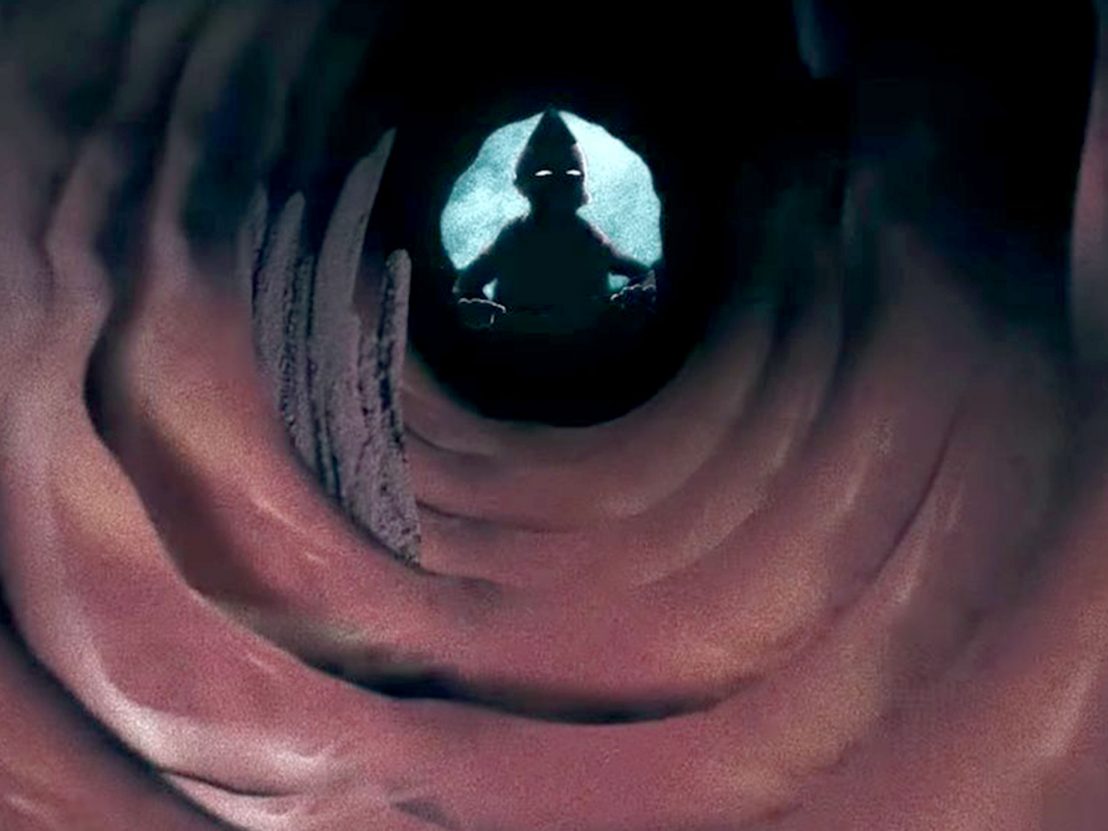 This is one of those movies where the knee-jerk temptation is just to describe it. And by cataloguing the instances of vile, visual grotesque – the blithe parade of unholy transgressions – that acts as its own, implicit critical adjudication. But Kuso, written and directed by the electronic musician Flying Lotus (along with a rogue’s gallery of collaborators/enablers), is a sick portmanteau that lives or dies by not knowing what’s lurking around the next ominous bend in that festering cinematic intestinal tract.

When the film was written about after its Sundance premiere in January, the headline was that patrons found themselves dashing to the exists. They apparently found Kuso to be an affront to the bounds of basic human decency, and a sick joke planted by a festival whose apparent mandate is to showcase wholesome, bittersweet indie gems starring slumming A-listers.

But if you were at that Sundance screening, and you did run for the door, know this: you are a lightweight, because even though the film’s commitment to including at least two varieties of bodily fluid in each scene is certainly laudable, it’s outrageous in the most jovial and ironic manner possible. At the film’s international premier, as part of the Glasgow Film Festival, there were no leavers, but a whole lot of laughers. And it’s really not difficult to synch up with the film’s wry, button-pushing antics.

Flying Lotus, aka Steven Ellison (who styles himself in the credits as Steve) weaves together a gaggle of short, surreal scenes which depict life in the aftermath of an LA earthquake. The only real physical upshot of the disaster is that all characters now have giant boils on their face. Some have matted scars where the pus bubbles have popped. A kinky couple attempt to level up their auto-asphyxiation sex games, but she’s no longer into it, possibly due to something hiding under that giant choker.

Then there’s the abused, incontinent bald man-boy who is drawn to weeping woodland orifice. And the Japanese woman looking for her baby through a giant, cockroach-infested hole in the floor. And then there’s the man who has developed a strange fear, and so visits a walk-in clinic run by George Clinton and his chesty assistant.

If you find someone trying to tell you any more information than that, put fingers in you ears, say “la la la la la” and walk away, because the surprise will be so much more effective. But while the vulgar punchlines often make for the most interesting talking point, it must be noted that Ellison packs his film with visual delights, from cut-and-paste collage animation, scuzzy, sloganeering asides, dazzlingly original make-up and and character designs, and an astounding scat-rap intro/outro care of Regan Farquhar (aka Busdriver).

The influences mostly derive from an understandably grotesque seam: the violent sexual boundary-teasing of Gaspar Noé and Lars von Trier; the ingenious conceptual gore found in films like György Pálfi’s Taxidermia and some of the early, more comically-inclined titles by Japan’s Takashi Miike; the satirical strips of Robert Crumb; the imposing trash-art follies of Matthew Barney. It may lack the camp ingenuity and empathy of John Waters at his best, even though it plays a little like the Prince of Puke’s raucous, CG-assisted sex odyssey from 2004, A Dirty Shame. Added to the noxious brew is some gorgeous graphic design, particularly a sequence in which a blocky spaceship covered in throbbing veins glides majestically overhead.

Ellison certainly has the visual ideas and the comic timing, but the film too often dashes for the quick, easy fart gag over anything more profound or dramatic. It’s more likely those Sundance wags were walking out due to mild tedium than any affront to their sensibilities. The film piles up miniature set-pieces and instances of designer nihilism, often forgetting that it’s the anticipation of those set-pieces which enhances the overall effect.

That said, this is a purpose-built midnight movie aimed entirely to tap the gag reflex, not the heart strings. On that level, it works like gangbusters. We can only hope that, when it goes into rotation (which it really should!), audiences are given Mr Quiggles tees, for he should be our new political emblem of hope defeating fear.