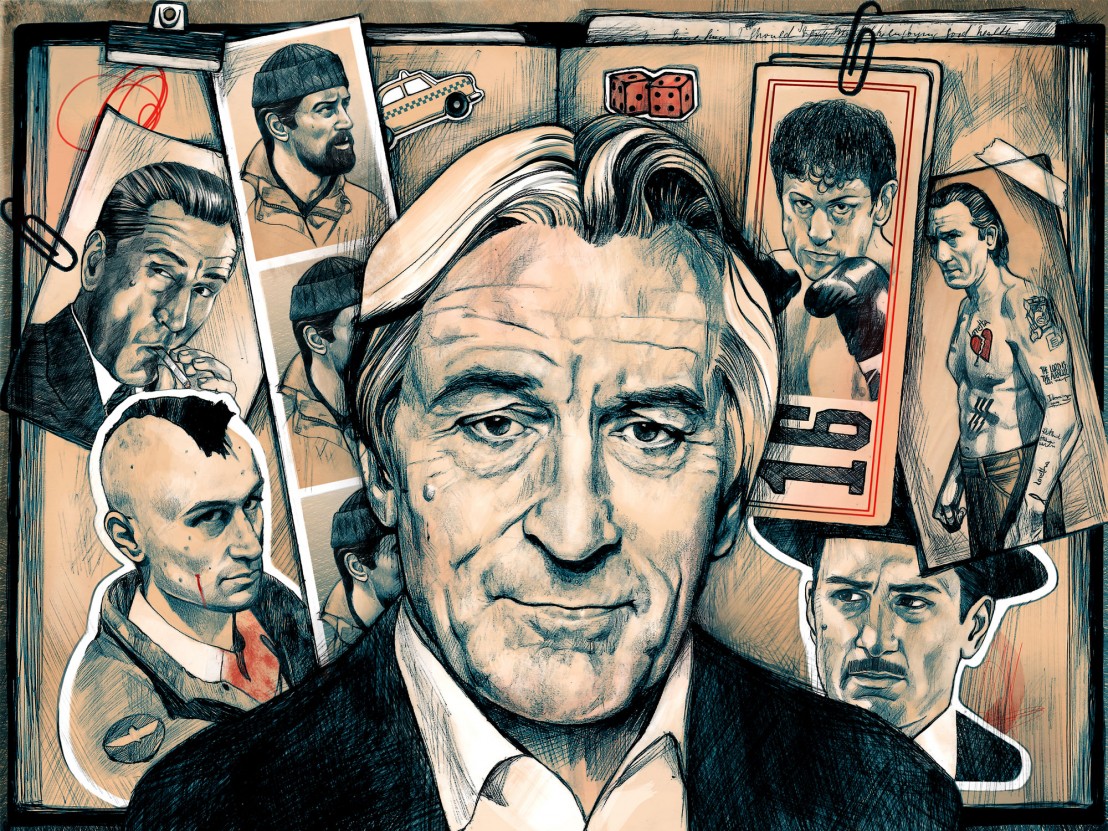 It’s not just the title of Martin Scorsese’s brilliant, excruciating tale of artistic delusion, The King of Comedy, that retrospectively takes on a sense of tragic irony when viewed in the context of its star’s career. There’s a shot of Robert De Niro’s anti-hero, Rupert Pupkin, practicing his stand-up routine in front of a mural of mirthful faces, canned studio-laughter drowning out his words. As Scorsese’s camera slowly pulls back, isolating Pupkin in the centre of the frame, empathy shifts to sympathy and then to pity as the laughter takes on a cruel, uncomfortable tone.

Viewed today, through the prism of De Niro’s more recent exploits, this shot becomes a kind of metaphorical time-lapse of the actor’s post-millennium career; beginning at the turn of the century with Analyse This and Meet the Parents and ending in the barren comedic wasteland of Dirty Grandpa.

Few would argue with De Niro’s ’70s and early ’80s output, a near-unbroken string of critical successes that began with a triptych for Brian De Palma and arguably peaked with his Oscar-winning turn in Raging Bull, the fourth of eight collaborations with Scorsese. Those films are now more 30 years old, and while the rest of the ’80s and ’90s saw as much good work as bad – a hit rate on a par with any of his contemporaries – De Niro rarely delivered a forgettable performance.

Previous attempts to exercise his funny bone came with varying degrees of success: The King of Comedy stands alongside De Niro’s best work while Midnight Run proved his sharp sense of tightly-wound timing as the straight-half of a memorable comedic double-act. And if We’re No Angels and Mistress deserve their place as footnotes on the actor’s CV, his work for John McNaughton (Mad Dog, Glory) and Barry Levinson (Wag the Dog, What Just Happened) remains perfectly respectable.

As The Telegraph’s Robbie Collin pointed out in his recent piece on De Niro’s comedies, Analyze This and Meet the Parents – the two films often seen as the beginning of the downward shift – really are better than you might recall, the actor gamely willing to mine the self-serious tropes of his on-screen persona for laughs. The films made a fortune, bringing the kind of returns unseen in his career to date. The afockerlyptically awful sequels – with De Niro was producing – were a no-brainer, their global box office numbers cementing the actor’s position as a bankable player in mainstream comedy. Yet while the likes of Analyse That, The Family and Last Vegas dominated the following decade and a half in terms of high-profile visibility, De Niro’s comedies account for barely a third of his output post-2000.

He has appeared in a staggering 38 films in the past 15 years, a lot by anyone’s standard, but then De Niro has always maintained a committed work ethic. Perhaps it’s a measure of the esteem in which his canonical performances are held that his recent work elicits such an affronted sense of indignation from even the most casual moviegoer. Audiences appear to be more willing to forgive and forget the likes of Michael Douglas (You, Me & Dupree; And So It Goes), Jack Nicholson (The Bucket List; How Do You Know) or Diane Keaton (Darling Companion; Christmas With the Coopers) their low-brow indiscretions. I can sit through a string of late Brando films and laugh them off with a what-is-he-like? shrug. Even Al Pacino just about gets a pass by force of personality alone. With De Niro, people seem to take his failures personally.

Revisiting The Hateful 38 in the wake of the slew of invectives thrown De Niro’s way upon the release of Dirty Grandpa proved an eye-opening experience, serving to both solidify and disavow me of a number of prejudices. There’s no escaping the fact that, for the most part, the films aren’t very good. In fact, I can count on one hand those which I would ever wish to revisit; and while it’s impossible to make any kind of sweeping generalisation as to why the films don’t work, viewing them together always brings me back to the choices of their one unifying component.

What is abundantly clear is that De Niro always brings something to the table, no matter how bad the film is. The notion that he no longer gives a shit is – to these eyes at least – nonsense. Which isn’t to say that he’s always good – some of his most committed performances (Being Flynn) are among his most miserable and affected, while some of his very worst films (15 Minutes) are made just about bearable by virtue of his characterisation.

It’s easy to be facetious when presuming to second-guess De Niro’s rea$ons for working on a given project, but most appear to have offered at least some potential on paper, irrespective of how they turned out. Even his legacy-flagellating passion project, The Adventures of Rocky & Bullwinkle, deserves some slack given the age of De Niro’s kids when he made it. (The argument that they deserved better is duly noted.)

Yet there’s no escaping the inattention paid to many of his films on script-level – his willingness to take on roles crying out for a second-draft. The clearest constant of these late-period films is that the quality of De Niro’s performance is directly proportionate to the quality of what he has to work with. Unlike Pacino, De Niro has never been the kind of actor who can mask the inadequacies of the material with his own charisma – he’s never been able to blag it. The stories of his method-like immersion in his great roles of yesteryear speak of total inhabitation of the character, of losing himself in someone else.

In a 2012 interview with The New York Times, De Niro suggested that those days are well behind him: “When I’m in it, I’ve already decided I’m going to work with the directors, so we have an understanding of what’s going to happen. I don’t get into these long-winded heavy discussions about character – do we do this or that or what. At the end of the day, what you gotta do is just go out there and do it. And the director respects what they’ve hired you for and chosen you for: to do the part and respect what you’re doing.”

That respect for the part is there in Dirty Grandpa, even if it’s frightening to see quite how committed De Niro is to such a repellent role. Yet give him a fighting chance with the right material and flashes of the old genius are still there to be found. It’s a shame that there aren’t more filmmakers like David O Russell, willing to feed De Niro the kind of meaty character actor parts on which he thrives (see: Joy, American Hustle, Silver Linings Playbook). Looking back at earlier films like City by the Sea or Stone, it’s invigorating to see the effect a decent script and a strong performance to play against (from Frances McDormand and Edward Norton respectively) have on upping his game.

Perhaps it’s also the case that De Niro has become un-directable, at least among the jobbing hacks and up-and-comers who populate the credits of much of his later output. The NYT interview seems to confirm as much: “Leave me to get on with it.” Compare the coffee shop scene in Heat with its knock-off equivalent in the dire De Niro/Pacino reunion, Righteous Kill, and you’ll notice the difference having a strong hand behind the camera makes to both actors.

The release of Dirty Grandpa has led to calls for De Niro to retire, which, considering how much he embarrasses himself in the film, is an understandable knee-jerk response. (If anything, it’d be great to see him back behind the camera, honing the admirable sense of time and place he brought to the small, personal A Bronx Tale and the sprawling CIA-epic, The Good Shepherd.) But perhaps it’s ultimately a little ungenerous to complain about anything he’s doing now given the rich cinematic legacy he will leave behind. Robert De Niro owes us nothing. He’s 73 this year, and if he wants to spend a few months in Florida with his thumb up Zac Efron’s arse, well, we reckon he’s earned it.