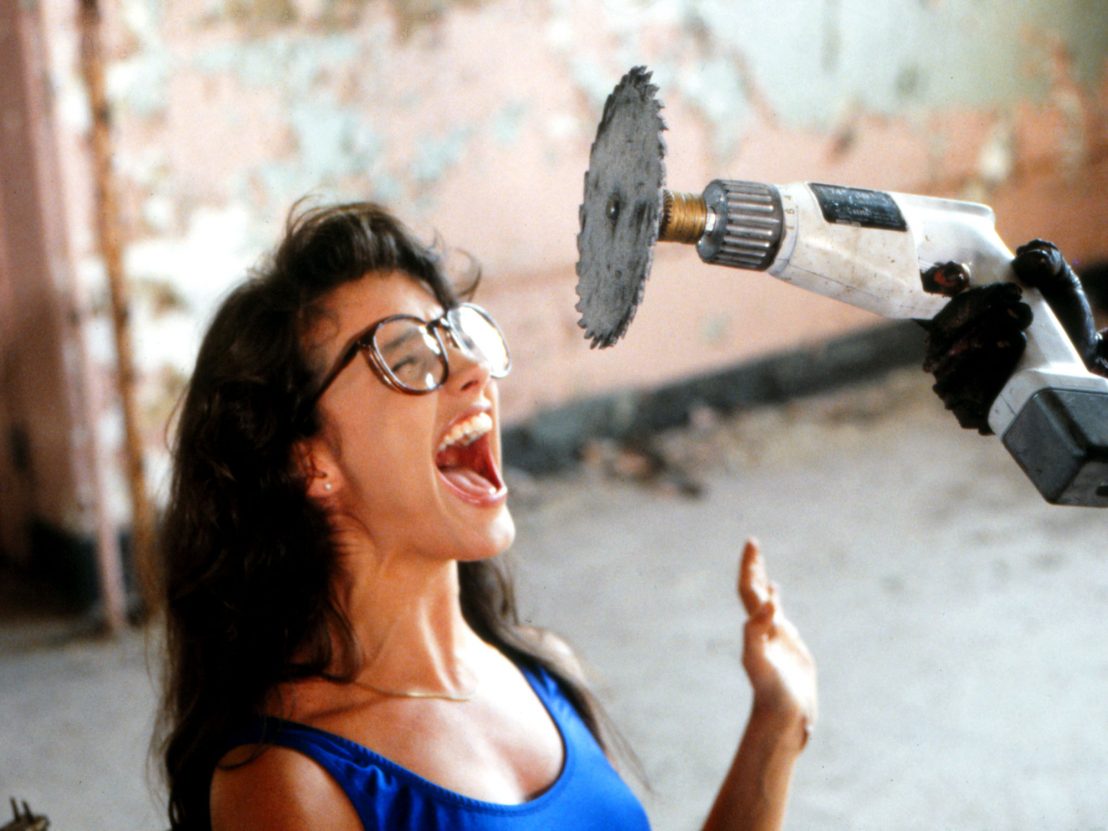 Picture the scene: it’s 1987, and the slasher – the subgenre that dominated the horror landscape for the first half of the decade – has also been steadily killing itself off, one film after another, until there are few new ideas left to be had. The Nightmare on Elm Street franchise, introducing a refreshing kind of slasher icon in 1984, who cracked wise where others merely breathed heavily, is presently being instantiated in its second sequel, Chuck Russell’s A Nightmare on Elm Street 3: Dream Warriors.

There will be three more nightmares on elm street in the current run, but they will also suffer the slow and torturous death of their own diminishing returns, as will the slasher in general – and it will not be until 1994 that the franchise will be rebooted and revivified by a returning Wes Craven’s thrillingly metacinematic Wes Craven’s New Nightmare, ushering in a whole new cycle of horror that comes with a postmodern, self-referential bent.

In Doom Asylum, which also came out in 1987, you can see both the whole history of this subgenre’s decline and the seeds of its renewal engaged in a game of cat and mouse. The film, directed by Richard Friedman and shot in a real abandoned asylum, features a plot that is purest slasher: 10 years after a tragic car accident killed Judy LaRue (Patty Mullen) and left her palimony lawyer/lover Mitch Hansen (Michael Rogen) with horrific scars, a group of five preppy teens (including Judy’s daughter Kiki, also played by Mullen) go picnicking outside an old abandoned asylum which a three-woman punk/industrial band, Tina and the Tots, is using as its rehearsal space – only to discover that the disfigured Mitch is still haunting those halls with murderous intent and a bag of coroner’s tools. From here on, co-eds are killed, one by one, in a series of semi-inventively bloody ways, before a final girl confronts the killer.

So far, so standard. But it is in all its bizarre little details that you can see Doom Asylum straining to escape its own conventions with relative integrity. Mitch falls very much into the Freddy Krueger camp of slasher, punctuating all his kill with hit-and-miss quips and still, despite having earned himself the nickname ‘the Coroner’, hanging onto the legal jargon of his previous profession. Yet he also appears to be inspired by the moustache-twirling villainy of actor Tod Slaughter, taking regular (surreal) breaks from his own brutal slaughtering to watch videos of the 1930s melo-horrors (Maria Marten, or The Murder in the Red Barn, Sweeney Todd: The Demon Barber of Fleet Street, The Crimes of Stephen Hawke, It’s Never Too Late to Mend, The Face at the Window) in which Slaughter starred.

This embryonic self-consciousness (more typical of late-’90s horror) extends to the ensemble of co-eds. Both parents of Jane (the screen debut of Sex and the City’s Kristin Davis) are psychiatrists, and so she feels qualified to subject her co-ed friends to the kind of cod-psychological analysis that critics often bring to slasher movies. That said, they are an eccentric bunch. Darnell (Harrison White) is an African American who dresses and acts like a WASP – although he is still black enough to earn his inevitable place as Victim #1.

Dennis (Kenny L Price) is “retentive”, as Jane puts it, in his obsession with baseball and baseball cards (this obsession being quite literally his only character trait). Kiki’s hunkish boyfriend Mike (William Hay) is chronically indecisive, while Kiki herself is the archetypal ‘dumb blonde’, insisting, when Mike offers to support her in mother Judy’s place, on calling him ‘Mum’ (a genuinely Freudian touch), and later refusing to have sex with him on the absurd grounds that “That’s incest.”

Best of all, though, is Tina and the Tots’ eponymous singer (played by Playboy centrefold Ruth Collins) who, despite engaging in a moment of toplessness that is gratuitous even by slasher standards, proves to be more like Tura Satana’s Varla in Faster, Pussycat! Kill! Kill! than some passive bimbo. She easily bests Mike in a fight (that she also picks), and as he dangles precariously from the roof of the asylum, stands over him cackling triumphantly – and she alone actively pursues and confronts Mitch, wanting actively to kick his ass rather than merely, like the others, to escape his clutches.

Apart from this, there are topical references to Reaganite Republicanism, safe sex and the ‘Just Say No’ campaign against drugs. Always goofy and occasionally gory, Doom Asylum is utterly disposable – but it knows exactly what it is. As Mike puts it, “In all those horror movies, whenever a girl leaves by herself, she gets in trouble.” It is the kind of genre rule which, almost ten years later, characters in Scream would be articulating with a similarly savvy self-awareness.

Doom Asylum is released by Arrow Video on Blu-ray in a brand new 2K restoration from the original camera negative, on 16 July.